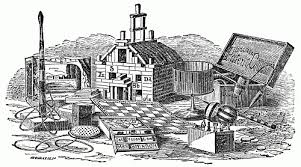 There are toys that slip through the cracks of reality into the realm of the lost and the fey. Pieces of a child's dream that slips into the realms of nightmares and Christmas past. These creatures are both chaotic and lawful. These creatures often recruit adventurers to deal with matters of utmost importance to the courts of fairy and fey. These creatures often recruit or accompany adventurers on journeys into the lands of fairy and nightmare. They can also be the direst of nightmarish enemies or NPCs.
Armor Class: 8
Hit Dice: 2 -3
Attacks: 1d4 claw or weapon
Move:8
Experience:5/230