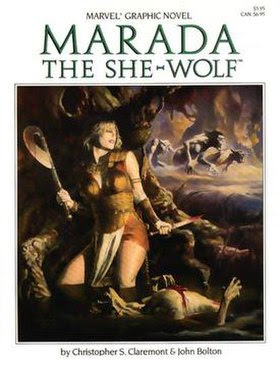 Grab a copy right over
HERE
Way, way, back in 1982 when Epic Illustrated was first being  published, I discovered Marada The She Wolf. She was exactly what I was looking for in a Sword and Sorcery character. Her stories were different, in a fully formed quasi Roman Sword and Sorcery World. Marada is not your typical S&S heroine. She's a damaged hero on a journey of terror, magic, and this series goes straight into the darker side of her journey. 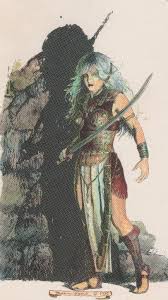 Her's were adventures in a very dark and deadly European style world. A world of demons, dark deeds, sorcery, and monsters! This was a much more adult oriented series then other comics of the time. It's lessons were ones that I would apply in my OD&D gaming.

According To Wiki :
Marada, the She-Wolf is a fantasy comic book fictional character created forEpic Comics by writer Chris Claremont and English artist John Bolton. She first appeared in Epic Illustrated #10 (Feb. 1982). The story was originally planned for the character of Red Sonja, Conan's sometime partner, but had to be changed due to issues surrounding the then-in-production Red Sonja movie with Brigitte Nielsen. Claremont moved the historical milieu from the Hyborian Era to theRoman Empire, and changed her hair from red to silver. Marada is also more sensual than Red Sonja, perhaps due to Bolton's drawings. (This change of character from Red Sonja to Marada resulted in some dispute over ownership of the character. Since Marada's adventures were first published in the creator-owned series Epic Illustrated, the rights to her character were eventually given to writer Claremont and artist Bolton.) 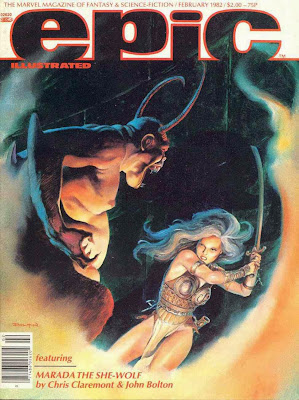 Marada's History :
Marada is introduced as "her mother was the first born of Caesar,"[2] though it is unclear if this refers to Julius Caesar or to a current emperor (bearing the generic title of "Caesar") during the Imperial age. Her adventures are a mix of fantasy and history, told from an adult point of view. Together with her friend, the princess Arianrod, she fights against evil demons, wizards, witches and other fantastic creatures, but also against the threats a woman could expect from a world ruled by males.
In a tip of the hat to New Mutants #32, Marada met a woman named Ashake in the graphic novel, and in a nod to Giant-Size Dracula #2, a demon named Y'Garon
You can find a ton of material on this heroine right over HERE
Most of the Marada The She Wolf stories suggest they bracket the Birth of Christ roughly between 50 BC to 50 AD.
Her foe Y'Garon seems to be about the power of a minor Pit Fiend and you can find out more about him right over HERE
Clarmont and John Bolton really did a great job with this one. It both evokes a sword and sorcery feel while echoing a weird Celtic world of myth and legend. Rhiannon who appears in the stories as a young girl would go on to become a powerful wizard and goddess in the Marvel universe. You can read about her right over
HERE
If you wish to sample some of her stories check one out HERE
The artwork is solidly done, the story crisp, the language concise and to the point, the ideas as original as they were when I read them in Epic Illustrated number ten.
Much of the material is still very entertaining and interesting even after all this time. Marada has always ticked a number of buttons for me. The way her world is set up, the use of adult themes,settings, magic, etc. never seemed juvenile nor cheap in their use. The world of Marada has recently resurfaced in my life with my look at Astonishing Swordsmen and sorcerers of Hyperborea. Marada's world is pretty much how I picture the Keltic elements in the AS&SH. Much of it weird, ancient, sinister, and more then slightly twisted in a good way. If you haven't checked out the "Marada The She Wolf' stories then do yourselves a favor. Grab a copy today and dive into her world.