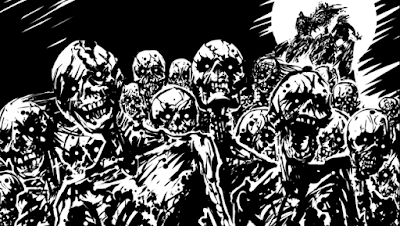 So is Death Frost Doom worth the price of admission? Yes I not only think so but I actually one of the essential LoFP books because of the way that it handles the game's material. This is a solidly dark and disturbing read,run, and rabble through the underbelly of the Lamentations universe for characters. I'd put this adventure high on the list of runs for a mid level group of LoFP adventurers. Five out of five for a reinvention of a fantastic adventure.
Posted by Needles at 11:14 AM No comments:

Everything in this module echoes so far the charm of a romp through the darkest corners of imagination with bits of Lovecraftian adventure throughout out the first couple of pages. To get into the ins and outs of this module is like looking at a horror film with a subplot that runs through it in a smart and very well way. There is the feel of European legend here mixed in with horror films then set on high and poured into a setting waiting to spring on the PC's. And I'm not talking about a total kill straight out of the gate. Instead what we're looking at is an adventure that takes full advantage of the horror tropes in well done but different way. Ways that actually fit into a wide variety of old school quasi- historical backgrounds and setting for which Lamentations of the Flame Princess is well known. This adventure can not only seamlessly fit into the back space of existing campaigns but can be used to generate entire local sub spaces for such. The adventure elements add an entire sub mythology and myth to the adventure. This is something that Zak Smith has done before as an author and designer. I see this all of the time on his blog but to see it done in an adventure using the old Death Frost Doom material is something else entirely.
Straight up this is a very well done adventure and I'll get more into it in the second part. My intial impress is that not only can this adventure work for Lamentations of the Flame Princess but I would use this adventure for other old school rpg's as well. I'm thinking here of OD&D with a dark horror theme or even Cthulhu Dark Ages. The conversion would be quite painless and easy to accomplish. Death Frost Doom is an adventure of supernatural horror and intrigue with a veneer of OD&D. This is not a light weight adventure but one that needs far more attention then it has been getting.  Please remember these are only my initial impressions of the adventure.  But for those DM's already running a LoFP campaign who bought the original adventure, go back and grab this one. This is a completely different animal then the first adventure and be prepared for that. More coming up in part II.
Posted by Needles at 8:08 AM No comments: