These two volumes contain a metric ton of free public domain science fantasy material that can easily be adapted to any number of sword and sorcery campaigns.
Go take a look this scan includes issues nine and six. Nine is first and has a ton of stories in the old school pulp tradition. Six is the issue with the 'Purple Sapphire' by John Taine.
Much of the material of Famous Fantastic Mysteries is simply neglected and forgotten by modern audiences giving a DM yet another resource to exploit for his adventurers in a weird sword and sorcery background for a campaign.
Who was John Taine?


Eric Temple Bell (February 7, 1883 – December 21, 1960) was a mathematician and science fiction author born in Scotland who lived in the U.S. for most of his life. He published his non-fiction under his given name and his fiction as John Taine.
Wiki has this to say about Eric Temple Bell : In the early 1920s, Bell wrote several long poems. He also wrote several science fiction novels, which independently invented some of the earliest devices and ideas of science fiction.[3] Only The Purple Sapphire was published at the time, under the pseudonym John Taine; this was before Hugo Gernsback and the genre publication of science fiction. His novels were published later, both in book form and serialized in the magazines. Basil Davenport, writing in The New York Times, described "Taine" as "one of the first real scientists to write science-fiction [who] did much to bring it out of the interplanetary cops-and-robbers stage." Davenport concluded, however, that "[Taine] is sadly lacking as a novelist, in style and especially in characterization."


The reason that he is sadly lacking in characterization is because he's a pure pulp writer and science fiction journeyman. This guy was one of the first in the field before Hugo Gernsback. 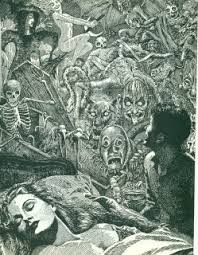 Because of its pulp themes, lost peoples, weird atmomosphere, strange events, and solid story line.I think it might make a great bridge piece for a sword and sorcery old school adventure.
The events could be easily brought over to AS&SH as a high level adventure with the party creating the background for the story. The PC's could easily play a central part to the mysterious events surrounding the novel.
All in all this is a great jump off point to a campaign that could span the ages and beyond.
There is certainly enough room to add any other elements as the DM sees fit without disturbing the story in the slightest.
DM's should consider the material and carefully read it over before committing to more of this style of adventure to make sure its right for his group of players.

The Famous Fantastic Mysteries method was very simple and yet elegant. Reprint classic pulp stories, with incredible artwork and deliver the goods time after time.
According To Wiki Here's why it worked :
"By the early decades of the 20th century, science fiction (sf) stories were frequently seen in popular magazines.[1] The Munsey Company, a major pulp magazine publisher, printed a great deal of science fiction in these years,[1] but it was not until 1926 thatAmazing Stories, the first pulp magazine specializing in science fiction appeared.[2] Munsey continued to print sf in Argosy during the 1930s, including stories such as Murray Leinster's The War of the Purple Gas and Arthur Leo Zagat's "Tomorrow", though they owned no magazines that specialized in science fiction.[3] By the end of the 1930s science fiction was a growing market,[2] with several new sf magazines launched in 1939.[4] That year Munsey took advantage of science fiction's growing popularity by launching Famous Fantastic Mysteries as a vehicle for reprinting the most popular fantasy and sf stories from the Munsey magazines.[5]
The first issue was dated September/October 1939, and was edited by Mary Gnaedinger. The magazine immediately became successful and went to a monthly schedule starting in November 1939. Demand for reprints of old favorites was so strong that Munsey decided to launch an additional magazine, Fantastic Novels, in July 1940.[5] The two magazines were placed on alternating bimonthly schedules,[2] but when Fantastic Novels ceased publication in early 1941 Famous Fantastic Mysteries remained bimonthly until June 1942.[6] Munsey sold Famous Fantastic Mysteries to Popular Publications, a major pulp publisher, at the end of 1942; it appears to have been a sudden decision, since the editorial in the December 1942 issue discusses a planned February issue that never materialized, and mentions forthcoming reprints that did not appear. The first issue from Popular appeared in March 1943, and only two more issues appeared that year; the September 1943 issue marked the beginning of a regular quarterly schedule. It returned to a bimonthly schedule in 1946 which it maintained with only slight deviations until the end of its run. 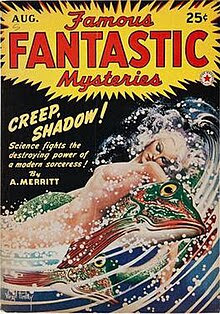 Munsey's plan for the magazines was laid out in a note that appeared in the first four issues: "This magazine is the answer to thousands of requests we have received over a period of years, demanding a second look at famous fantasies which, since their original publication, have become accepted classics. Our choice has been dictated by your requests and our firm belief that these are the aces of imaginative fiction."[3] The first issue included Ray Cummings' "The Girl in the Golden Atom" and A. Merritt's "The Moon Pool", both popular stories by well-known authors.[5] Merritt's sequel, "The Conquest of the Moon Pool", began serialization in the next issue, with illustrations by Virgil Finlay. Finlay did many illustrations for Famous Fantastic Mysteries over its lifetime, and became one of its most popular artists.Frank R. Paul began illustrating for the magazine with the third issue; he was not as capable an artist as Finlay but was very popular with the readers.[5] The first five covers were simply tables of contents, but with the sixth issue, dated March 1940, pictorial covers began, with Finlay the artist for that first cover.[3] Three early covers in 1940 were painted by Paul, but thereafter almost every cover was painted by either Finlay, Lawrence Stevens, or his son, Peter Stevens, including every single issue from February 1941 through April 1950.[8][9][10][11] The high quality of the artwork helped make the magazine one of the most popular of its day,[12] and sf historian Thomas Clareson has suggested that it was Finlay's work in Famous Fantastic Mysteries and Fantastic Novels that made his reputation.[3]
The decision to launch Fantastic Novels was taken partly because there were a great many book-length works that readers wanted to see reprinted."
These magazines shouldn't be over looked as both inspiration and solid grounding for adventures. They could be used as part of a joint long term campaign for a pulp style retroclone adventure. Because they're public domain much of the material has yet to come into the providence of  sword and sorcery gamers and DM's!
Posted by Needles at 9:51 AM