This is one of my all time favorite collections of Lord Dunsany . This book not only crosses the twin genres of sword and sorcery but also the dream like fantasies of many who would come later including HP Lovecraft and many luminaries of the genre. This collection of stories hits all of the right buttons though. 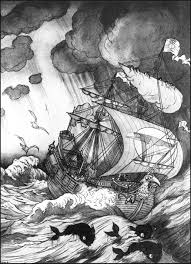 A work from  the forgotten master Sidney_Sime whose illustrations of Lord Dunsany define the writer's worlds so well.

According to Wiki :
The Sword of Welleran and Other Stories is the third book by Irish fantasy writer Lord Dunsany, considered a major influence on the work of J. R. R. Tolkien, H. P. Lovecraft, Ursula K. Le Guin and others. It was first published in hardcover by George Allen & Sons in October, 1908, and has been reprinted a number of times since. Issued by the Modern Library in a combined edition with A Dreamer's Tales as A Dreamer's Tales and Other Stories in 1917.
The book is a series of short stories, some of them linked by Dunsany's invented pantheon of deities who dwell in Pegāna, which were the focus of his earlier collections The Gods of Pegāna and Time and the Gods. One of the stories, "The Fortress Unvanquishable, Save for Sacnoth," was afterwards (1910) published by itself as a separate book, a now very-rare "Art-and-Craft" style limited edition.
-Contents -


In Dunsany everything has its place and fits together like a well oiled machine. The material is fresh and new even after all this time. The reason why its  so loved is because its both original and engaging. His divinities and background drive everything that follows in his work. Is it really any wonder that Lovecraft thought so highly of his work. A quick examination of his gods reveals some interesting details. From wiki comes the following entry:

After Mana-Yood-Sushai "made the gods and Skarl", Skarl made a drum and began to beat on it in order to lull his creator to sleep; he keeps drumming eternally, for "if he cease for an instant then Mana-Yood-Sushai will start awake, and there will be worlds nor gods no more." Dunsany writes that

Besides MANA-YOOD-SUSHAI, there are numerous other gods in Pegāna's pantheon, known as the small gods:

According to Roon, the God of Going, "There are a thousand home gods, the little gods that sit before the hearth and mind the fire--there is one Roon."[14] These home gods include:

Trogool, neither god nor beast[edit]

Trogool is the mysterious thing, sat at the very south pole of the cosmos and whose duty is to turn over the pages of a great book, in which the very history writes itself every day until the end of the world. The fully written pages are "black", meaning the night, and when it is turned, then the white page symbolizes a new day. Trogool never answers prayer, and the pages that had been turned shall never be turned back, neither by him nor anyone.
Trogool is the Thing that men in many countries have called by many names, IT is the Thing that sits behind the gods, whose book is the Scheme of Things.

Everything has its place in his universe and his gods each become not only a facet of their universe but the center as well as the framework. Adventurers and heroes here are going to have both small goings on and epic adventures at the same time.
Another lesson I quickly learned from this book is to engage the players early and keep em entertained.
After the first few paragraphs the reader is deeply invested in the world and creations of the writer. With a game like AS&SH the DM and players are going to be heavily invested in the background and the adventures. This could well effect the possibilities of the over all fate of Hyperborea or at least their version of it.
As I write more of Accursed Terra and its environs many of the old favorites have been coming off of the shelf. This one happens to be one of them and I thought I'd share it with you. Its way too bad that not more folks know about Dunsany today. He seems to be a much beloved footnote in fantasy rather then a cornerstone. I was reading the 'Encyclopedia of Fantasy' today and looked at this really well written description of Dunsany. I wonder how many college kids today know or have read his works. Everyone today knows Tolkien and Middle Earth but Pegāna is left sitting on a shelf someplace far too remote for a movie or mention today. Kind of sad since the literature is easy to access, readily available on the internet, and best of all free.
This material can serve a DM finely as a blueprint to create their own divinities, adventures with a dream like quality, and simply to be appreciated for being one of the corner stones of Appendix N in the AD&D DM's Guide. As well as being one of the best pieces of fantasy literature out there.
Happy Gaming
Posted by Needles at 6:13 PM