The 90's could be considered the second wave of Horror movies. There were lots and lots of weird, horrific, and strange movies. This was a time when the video store was king,practical special effects were giving up their last hurrah,  CGI were just edging into the venue, and the 70's as well as the 80's movies were still on rotation.
So here are some of my favorites that are going to be in rotation.
Split Second is a 1992 film that rarely gets mentioned anymore. A science fiction/horror film that always seemed to be rented when I was working in the video shop in Boston. This movie always seemed to be known by those playing in my SLA Industry games or my Cyberpunk 2020 campaign. Yet these days I believe that it serves more of a Mutant Future vibe.

The plot according to Wiki :

In the year 2008, extensive rainfall has caused large areas of London to be under a foot or more of water. Rookie police officer Dick Durkin (Duncan) is assigned to partner Harley Stone (Hauer), a burnt-out and highly cynical homicide detective who, according to his commanding officer, survives on "Anxiety, coffee and chocolate" after being unable to prevent the murder of his partner by a serial killer several years previously. Now however, the murders have begun again and Stone and Durkin are assigned the case. After investigating the scenes of several killings, they appear no closer to identifying the killer, with their only clues being that the murders seem to be linked to the lunar cycle, and that the killer has multiple recombinant DNA strands, having absorbed the DNA of seemingly anything he kills.
Finally, after Stone's girlfriend Michelle (Cattrall) is kidnapped, the detectives track the killer deep into the flooded and disused London Underground system and discover the truth: The killer is not human, and actually some horrific and unknown homicidal, demonic form of life - Fast, savage, bloodthirsty and fixated upon killing Stone just as it previously killed his partner. In fact, as the movie progresses, each killing and "appearance" of the monster is an attempt to lure Stone closer and closer.
After a tense battle in and around an abandoned Tube Train, Stone is able to pull the monster's heart from its chest and kill it. However, as the policemen leave the scene with Michelle in a rescue dinghy, bubbles of air are seen breaking the surface of the area of water over which the beast had Michelle suspended as bait. The monster's body is submerged, suggesting that there may be more than one.

Another one that hardly gets mentioned from the 80's that has many elements of  'City' is Angel Heart.
This is a tight, nasty, and very dark film. The number of times I used this one as fodder for a campaign is countless. 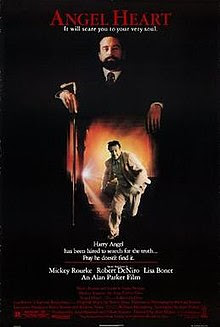 A highly atmospheric film, Angel Heart combines elements of film noir, hard-boiled detective stories and horror. The book is even better and it never leaves New York City. According to wiki : "The film is adapted from the novel Falling Angel by William Hjortsberg, and is generally faithful to the novel with the exceptions being the introduction of a child of Epiphany Proudfoot conceived at a voodoo ceremony by "a devil", and that the novel never leaves New York City, whereas much of the action of the film occurs in New Orleans."
Want to know more about Angel Heart? Here's the wiki entry right over
HERE
The third film that's going to be very influential is another one that hardly ever gets mentioned these days. The third installment in John Carpenter's Apocalypse trilogy is In The Mouth of Madness. Have you read Sutter Cane?
According to Wiki :

The film is the third installment in what Carpenter calls his Apocalypse Trilogy, preceded by The Thing and Prince of Darkness. In the Mouth Of Madness plays with its audience as an Outer God messes with PC's. 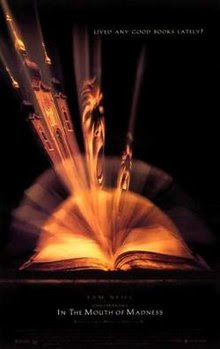 Those three movies mark some of the most Lovecraftian of Carpenter's work. Yet 'They Live' and the original Fog fit right into the vein of what I'm going for.
There's a ton of information 'In The Mouth Of Madness' Wiki entry:
HERE

Think of the world after Mr.Cane's friends get done with it. This might be a world that the PC's travel to. Other possibilities are  the worlds of The Thing and Prince of Darkness. Lamentations supports exactly this sort of thing.

Please Press Play To Begin!
Thoughts On Lamentations of The Flame Princesses 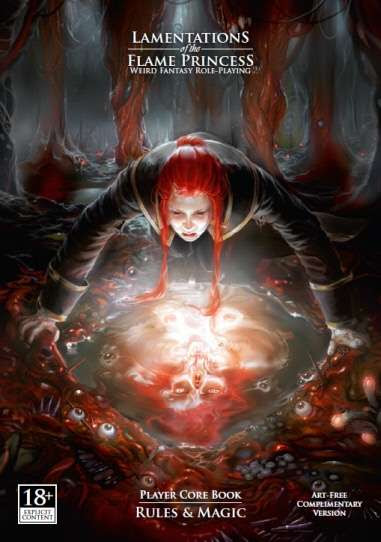 Given some of the movies I've watched over the weekend, the ideas moving through my head and some of the reviews I've read. My players want to get a LOTFP game going in the worlds I've written up.
One of the reasons is that Lamentations is easily convertible to Labyrinth Lord.  This makes
Realms of Crawling Chaos, the LL Lovecraftian supplement, an excellent piece of  supporting material for a LOTFP game.  The other things I tend to reference are the Moldvay BX editions for common critters.
Since I own Carcosa this opens up even more possibilities.
The conversion between the Goblinoid Games products and LoFP is a big selling point for me.
For my players In The Monday Night game
This is the no cost, no-art version of the Rules & Magic book for the LotFP Weird Fantasy Role-Playing Game.
HERE