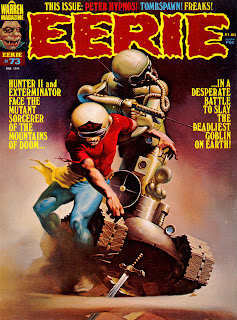 "The Exterminator war droid looked down on to the smoking remains of the latest series of adventurers or targets without pity or remorse. The smoking remains burnt merrily to themselves speaking volumes of warning to others who would venture into the confines of Caliban. The "Flying Dutchmen of Megadungeons" winged its way between the planes. The wardroid slapped its clip home into the 50 caliber weapon and began its rounds again and wait. Waited for the next batch of fools to cross its path and its guns. It took a certain grim satisfaction in a job well done. Even as it whirled on its treads conscious of someone or something waiting it from far off. "

The Exterminator series of Cybernetic Organisms From  A Future Darkly Introduction

The Exterminator series of cybernetic organisms isn't simply a collection of devices or government sponsored assassins moving across the face of this scarred Earth of ours. The Exterminator series is one of the most important cyborgs ever to roll off of an assembly line.  The "Exterminator Force" created these super efficient killing machines for the purpose of removing certain genetic defects that resulted in mutations that were incredibly dangerous to future generations.
A number of these modules were were lost throughout time and space to many different alternative Earths and timelines. These cybernetic killers were drawn from the ranks of the desperate and the damned. Sometimes condemned political criminals and sometimes ordinary citizens were encased in the shell of the Exterminators.
These cyborgs were made for doing two things: To act as assassins and to remove the threat of genetic mutations in all its forms giving mankind a chance to survive against the coming onslaught.

Anatomy of An Exterminator Cyborg
Each and every Exterminator series robot is a blue green spindly humanoid war droid body. Its head consists of an oval over sized set of sensors built into a suite and a mouthpiece that resembles an aviator's oxygen mask. 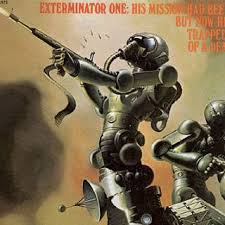 Exterminator cyber systems are usually linked to advanced AI personalities that actually control the robotic bodies up a one hundred fifty miles. The human minds are put into the robotic bodies because because only the "human killer instinct" is needed to create the perfect robotic killers.
These robots were used extensively in overpopulated alternative Earth future timelines in the Warrenverse.
These robot use conventional military weaponry and specialized Exterminator  weapon systems. This innovative cybernetic systems were used in both military and private sector security systems as well as black ops weapons shop. These borgs are complete total conversion organisms. The Exterminator systems are immune to many forms of magic and psionic abilities.
The human torso, nerve clusters, spinal column, eyes, skull, minor skeletal structures,and any other human elements  are incorporated where needed.
All cybernetic systems are there to offer computer council, also assure loyalty to the US government.  They also have massive bio storage memory capacity and able to have real time human experience memory interaction.
They have both advanced optics and sensor systems. They have high supernatural threat assessment systems and complete mutant extermination data bases.
The first of the Exterminator series was launched in its alternative timeline future on February of 2014.
The second of the Exterminator series of cyborgs is identical to the first except that he is attached to a tank like vehicle which also has computer systems counter measures, advanced AI assist,and advanced communications systems.  The Exterminator series was in operation for three hundred and eighty years.


Variations on a The Exterminator Platform
There is speculation that the Exterminator series was the basis for the "Bakshi Peace Project Android Units". These cybernetic systems developed by the "Exterminator Works" scientists also found their way into the advanced android systems of the Peace units.

Leaps in the private medical and security sector in the alternative 2014 came as a result of the government sponsored cyber soldier programs. "Adjusting the alien vampire threat" became a top priority during this time.  As time went on the Exterminator units were programmed to work with minor mutated beings against Alpha level threats.
" Project Mandroid" developed parallel with the various incarnations of the Exterminator Cyborgs. This more human variation on the technology allowed a greater platform for Quisi civilian and and private sector armed forces. This allowed cybernetic conversion of wounded armed forces or condemned criminals into the Mandroid units.

The Mandroid units paved the way for "switch and go" weapons options, and extensive off road capable tank tread platforms. These weigh in excess of 3000 pounds or more.  Because of the greater human to machine index on the Mandroids there is a much higher empathy level in these cybernetic organisms. There is also the built in obsolesce factor. These units would only last one hundred years as their human organic parts wore out. 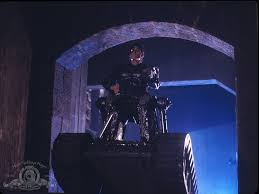 The real innovation to the Mandroids is the direct mind link interface. This allowed "direct memory" downloads onto any human computer from the human mind of the cyborg. This was a direct result of studies conducted on a captured Exterminator frame.

Because of the direct memory interface technology, the Mandroids came with a complete data base of human culture and history. This made them perfect time space explorers. They paved the way for later improvements into the Exterminator series of cybernetic machines

In the post apocalyptic horror world of 2394 the Exterminators and even their variations saw extensive action. They were used against all types of Alpha level mutant supernatural threats from vampires, werewolves, even some minor Lovecraftian horror races. The "Exterminators" were the perfect killing weapons. A final nail into the coffins of the so called mutant menace.

Behind the helm of the Exterminator War Droids 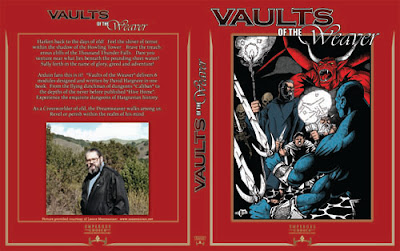 The Vault of the Weaver contains monsters not normally found within the Arduin rule books . These "boss monsters" are several grades above the traditional monsters of "Bloody Arduin". The war droids seem to be computer controlled hit men from the same alternative worlds as the Warrenverse . So I simply married the character created by author Bill DuBay and artist Paul Neary.
The Exterminator One unit appeared in "Eerie #69, in 1974 and is trade marked to Warren publishing Co.
The Mandroid is from The Elimators film. Since I'm doing the Horror VHS campaign I figured this was a perfect fit.

I wanted to squeeze in "Peace" from the Ralph Bakshi's movie Wizards  in there someplace. Obviously Peace is copyrighted  and trade marked to its owner. I have nothing but the greatest respect for Mr.Bakshi.
No doubt your wondering how the Wardroid cyborg got into the wandering dungeon of "Caliban" in the first place . Its a pretty tough call, how the cyborg got into there. How he gets out is the real rub though.
Obviously  this is a fan created blog entry. This blog entry is for entertainment purposes only there are attempt to violate the copyright or trade mark infringement of the original copy holder's. work. Everything else is a result of my own warped mind.
External Links
You can find "The Vaults of the Weaver" from Emperor's Choice right HERE
All information Regarding The Exterminator series comes from HERE
Posted by Needles at 12:07 AM