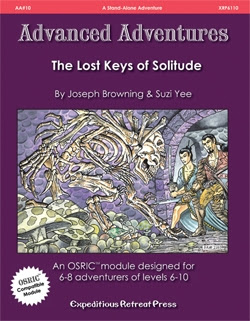 Free Adventure Advanced Adventures #10: The Lost Keys of Solitude is an OSRIC(TM) module designed for 6-8 adventurers of levels 6-10.
Get it right HERE

From Pens of my friends Joseph Browning and Suzi Yee comes this adventure!
The plot according to RPGNOW:


Advanced Adventures #10: The Lost Keys of Solitude is an OSRIC(TM) module designed for 6-8 adventurers of levels 6-10.
Clocks in at 28 pages but be sure to print out the maps separates


While traveling through the foothills of the Garvain Mountains, your party found refuge for the night in a hermit's cave. In the morning, you wake to find the hermit and all his possessions gone, all except for two golden tiles: one embossed with the image of a bull with his hrons down and ready to charge, the other a tiger poised and ready to pounce. When the tiles are placed next to each other so that the bull and tiger face one another, the embossed images move, fusing the two pieces into one. The newly created image is the bull and tiger locked in combat. The fused piece is easily separated, and when separated, the images of the bull and tiger return to normal. Beside the two golden tiles lies a crudely-drawn map of the area with a path marked through valleys and passes ending at an "x" labeled "Solitude."


What terrors or treasure could be found in Solitude?
The artwork is from the wonderful instruments of Bradley K. McDevitt

Be sure to check out more From