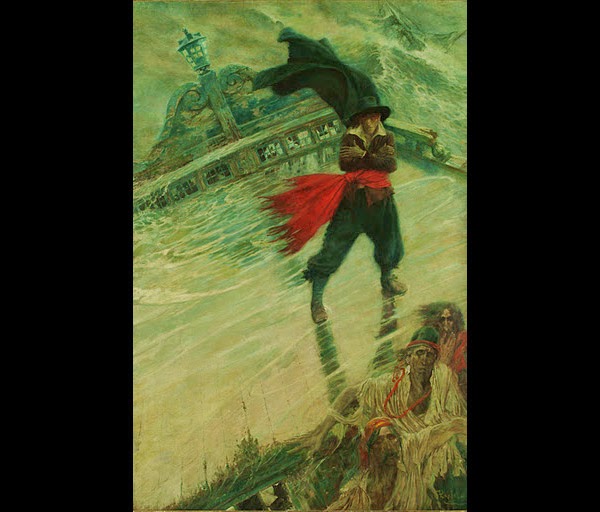 “The many men, so beautiful!
And they all dead did lie:
And a thousand thousand slimy things
Lived on; and so did I.”
― Samuel Taylor Coleridge, The Rime of the Ancient Mariner

Seen near the Port of Isafjordur on the outer edge of Iceland, a strange ship  has been spotted by local fishermen and they think that she bodes ill for any who sight her. The ship is the Lenore and she is crewed by dead men and her sorcerer captain who has ventured beyond the bounds of our universe into the Outer Darkness  and came back a changed men. He and his crew are men and something quite different not quite dead and bound within rotting flesh. Now they are doomed to sail eternity. But they have come to the shores near Iceland seeking out the Black School, only the dark masters of this school of ancient deviltry and witchcraft can hope to release these black souls into the hands of 'the Devil'.
The PC's are traveling adventurers and are hired by a witch of some standing to board the ship and deliver a potion to these men of black renowned to allow them entrance to the gates of  The Black School. Details on the Black School can be found right over HERE

The witch will offer the PC's thirty pieces of silver or gold of a valuable aspect but she will warn them if cheated, a demon will come for them instead.
The PC's are given a scroll wrapped in an oiled seal skin and writ in the blood of the damned. The PC's will have to row out into the Port of Isafjordur at noon and recite the words of power written on the skin of a condemned and cursed man. They must return to the spot at sun set on the same day when the veil between the worlds is thinnest.
The ship appears in flash of green grey light with the setting sun. A weird dream haunted sea of brackish green black waters appears around the PC's row boat or craft. Odd things swim around in the waters and the PC's will find themselves in a place of wrack and ruin. Strange almost organic looking rocks piece the these strange waters.
The ship is partially decayed and stinks of the dead and damned. The captain Zenob will call a welcome to the PC's.  Once aboard the PC's are trapped beyond the wall of unreality outside the  world  but inside a timeless limbo like dimensional veil.
The Captain will slowly explain his plight to the PC's.

Zenob's is a sad tale of tragic misplaced loyalties and reckless power grabbing. He was an honest sea captain whose wife ran off with his best friend, the good captain was trading goods with some very questionable associates from some of the smaller islands surrounding Greenland. Several ancient relics,scroll texts, and other antiques came into the captain's possession.
After several months of  study the good captain cracked under strain of a combination of a broken heart, depression, and possible demonic influence from these relics. Some speculate that the relics may have come from ancient Hyperborea but this is merely speculation. But what is know is that the captain summoned something from the depths of the Outer Darkness and he was changed by the experience. His crew were soon overpowered by this hellish inference.

Zenob and his crew were changed men and need to reach their final reward to know peace. The PC's can destroy this artifacts to free the soul of the men (which will not work.)
Or they can research these artifacts in captain's library.
The PC's will find an ancient black dagger of valcanic glass as sharp as a razor among the belongings. If Zenob is questioned about the item, he does not recognize it. 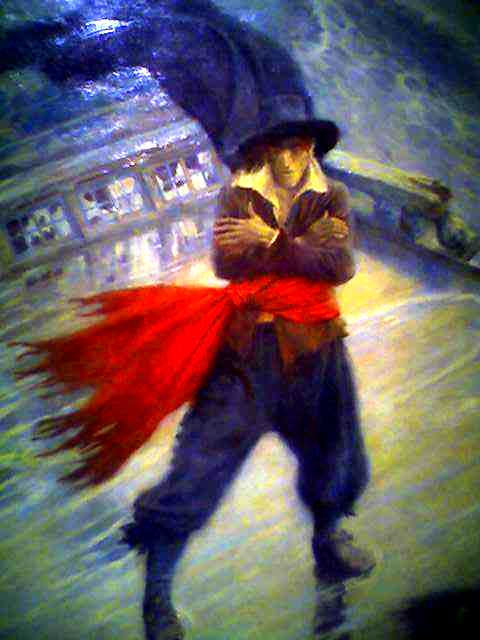 “Since then, at an uncertain hour,
That agony returns:
And till my ghastly tale is told,
This heart within me burns.”
― Samuel Taylor Coleridge, The Rime of the Ancient Mariner


But its not just as simple a situation as this, each night a powerful demonic witch thing sneaks aboard the ship and massacres the crew at what passes for sunset in this timeless hellish  limbo. She is wicked, implacable and immortal it seems as the crew themselves. Each time she comes monsters out of the deepest nightmares of Hell itself preceded her. Use one or two hit dice monsters from the LoFP rule book pages 133 and 134. She fights as a 6th level fighter and regenerates as a troll ala OD&D. She is able to cast magic as a 4th level wizard but seems much diminished in power. She will be confused and very angry at the PC's presence on board.
After two encounters she will ask for parley with the party.

“Her lips were red, her looks were free,


Her locks were yellow as gold:
Her skin was white as leprosy,
The Nightmare Life-in-Death was she,
Who thicks man's blood with cold.”
― Samuel Taylor Coleridge, The Rime of the Ancient Mariner'

She will explain that her name is Athava, a witch from the Black School who trapped her philandering black magician  husband and crew  within this timeless Hell as part of a bargain with the twelve ancient devil gods of Hyperborea. She is naught immortal and regrets the bargain after turning & mutating into this demonic hag thing. Athava has been sending dreams to her sister with a plan to free her soul and send her husband down to the depths of Hell to the fiery claws of Satan himself. After observing the cycles of horror and violence it may occur to the PC's that killing Athava themselves with the ancient glass dagger may free themselves.

“An orphans curse would drag to hell
A spirit from on high;
But oh! How more horrible that that
Is the curse in a dead man’s eye!”
― Samuel Taylor Coleridge, The Rime of the Ancient Mariner

After three cycles of violence and degradation, Ru'kelothat the demon which holds Athava's soul in its claws for its dark master will appear from the depths of this place. It will offer to free the ship and crew for the souls of one of the adventurers. It will offer riches and other incentives for this bargain but of course this is a completely twisted bargain. Should the PC's manage to kill Athava, the mists ahead of the ship will clear and the ship will exit this timeless void quietly sailing toward the twisted  rocks of the Black School only be dashed upon the waiting claws of the Devil himself. Zenob and crew will be dragged below the depths by the demons that follow in the wake of their dark master.

The PC's will find themselves upon the shores of the Black School barely clinging to life. A few of the relics and artifacts around them, trinkets to provide them with further damnation for their souls. Members of the Black School will nurse them back to health and they may take these trinkets as payment for the deed.