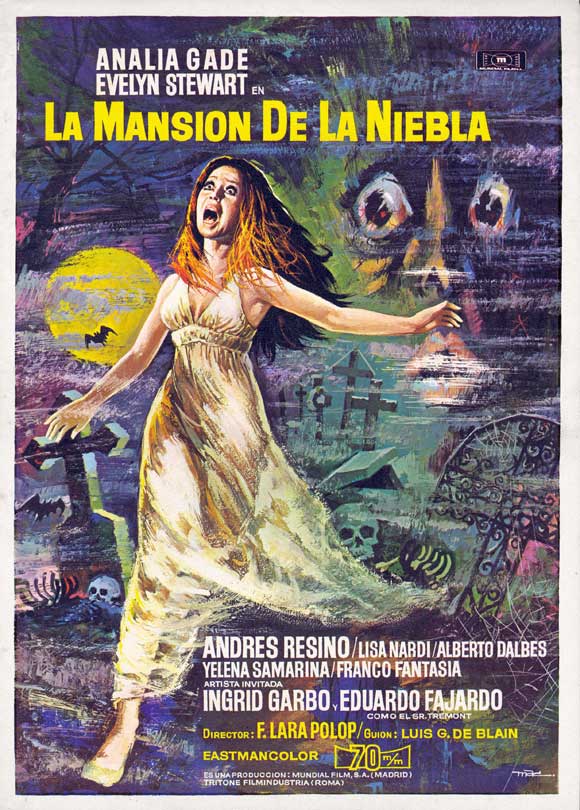 Murder Mansion is a great little grind house movie:
MURDER MANSION (1972 ITALIAN)- Four women and three men are forced to spend the night in an eerie mansion due to inclement weather, and they soon wish that they had stayed outside. Inside the horrible structure, terror and mayhem reign. AKA Maniac Mansion. *Not to be confused with the 1946 suspense film "Murder Mansion".

Murder Mansion is a great little grind house flick that is perfect for setting a low level Call of Cthulhu game or even a Kult Game. The film has a little bit of everything. The fog rolls in an traps a bunch of strangers in a house. Then there's their hostess. She spins a tale of abandon village, witch ancestor with overtones of vampire and even a subplot with a mysterious document. The whole thing seems to stretch back to 1942 and there are overtones of the Italian zombie flicks of the 70's here as well.
The film delivers on the atmosphere meter more then the blood guts and gore scale. The fact is that the plot and the location of the house that has become unhinged from reality as a jump off point is pretty classic. The film's plot could even be borrowed for a game of Dark Conspiracy for that Kolchak touch.
The film could work as a spring board for a Realms of Crawling Chaos game. The party becoming trapped by the fog and the undead crawling around outside. There are certain enough dark overtones for a dark fantasy game.
Because the film was made in 1972 its mostly forgotten and abandon. A DM could use it as a blank slate to paint the movie as a jump off point into the "Other World"

I've used the film twice as a gate way game for Chill and some other games where a quick entry into Hell, the Astral, or some other worldly location is needed. The location is flexible and the European villages could be anywhere from Italy, Spain, or even Romania.
Posted by Needles at 12:31 AM