The movie is based on the Italian comic Valentina which according to wiki :
Valentina Rosselli, whose appearance is inspired by silent film actress Louise Brooks, is a Milanese photojournalist. Her boyfriend, Philip Rembrandt, the super-hero Neutron, has the ability to paralyze people, animals or machines he has seen in the flesh or pictures. Later a child was born to Philip and Valentina, Mattia.
The character Valentina was born on December 25, 1942 in Milan and grew older during the series, the last episode of which was published in 1995.
As the time passed, in Valentina's stories Crepax abandoned the fantasy-science fiction or detective themes of the beginning, introducing a complex, weird mix of erotism hallucinations and dream. The strips also dealt with bisexuality, autoerotic ecstasy, super-sensual abandon, and sadomasochism.

In 1973 a feature film called Baba Yaga was based on the comic book. Valentina was played by French actress Isabelle De Funès. The film was directed by Corrado Farina, who had previously made a documentary on the comics by Guido Crepax.

Strange things have been happening to Valentina, a young and beautiful professional photographer, ever since she made the acquaintance of Baba Yaga, a mysterious older woman who gave her a lift home late one night. For one thing, Valentina has been having weird, kinky nightmares. For another, one of Valentina's cameras seems to have acquired a deadly curse. And then there was that visit to Baba Yaga's house, where Valentina discovered bizarre relics, including a dominatrix doll, and a bottomless pit in the living room. Valentina comes to realize that Baba Yaga is a witch who is out to possess her - body and soul. 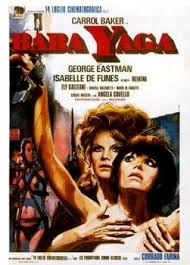 There is a lot of surreal stuff going on in this movie. It weaves back and forth between the real world and a strange pseudo sexual dream realm. The type of stuff that is seen in Kult and some of the Pagan Publishing Call of Cthlhu game stuff.
There's some really strange stuff going on with the title character. A rich old widow who nearly runs down the main character. She grows young and old at the drop of a hat. She has magically abilities and uses them not only on the main character but on her camera as well. 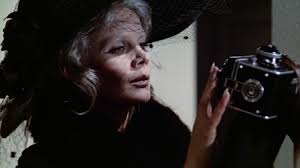 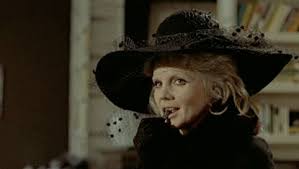 It comes to life later on and tortures the main character sadomasochism fashion.

Theories abound as to what's actually happening in this movie. Some of the theories put forth are that Baba Yaga in this movie is actually an aspect of Hastur or a ghost of a rich widow trapped between the world of the living and the world of dream. For Kult she might be a forgotten god slumming her way through Milan trying to hold on to her power and she needs an anchor in this world.
For all of its "adult" themes the movie is relatively light on the sexual stuff and titillates  more with its nudity. In a nod and wink fashion of the 70's and common to movies of this type. 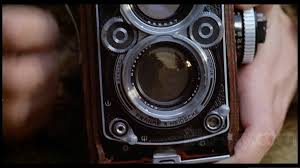 The movie is really a blank slate and could be used as a jump off point for PCs to explore the collective unconsciousness where only dream fragments of the dead still exist. I've used this Freud approach to several OD&D games with horrific overtones.

The film also has made its way into both Unknown Armies and Over The Edge. Please bare in mind that it is a grade Z movie and you can take what I'm saying as only my opinion. Your mileage may vary.
Posted by Needles at 8:27 PM