The Magic Sword is a public domain 1962 production that I've used for many years as fodder for OD&D & AD&D style adventures. The movie is a kids production from 1962 but many of the elements are at once Arthurian and Sword & Sorcery in nature. 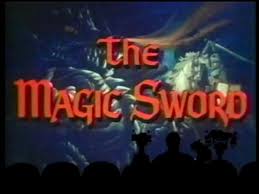 The Plot according to Wiki :

George (Gary Lockwood) is the foster son of Sybil (Estelle Winwood), an elderly sorceress. She brought him up after his "royal parents died of the plague" in his infancy. He has fallen in love at first sight with Princess Helene (Anne Helm).
She is kidnapped by the wizard Lodac (Basil Rathbone), who brazenly informs her father that he intends to feed her to his pet dragon in seven days, revenge for the death of his sister at the same age as Helene is now: 18. George wants to go on a quest to liberate his lady love, but Sybil believes he is too young (he is 20). She tries to distract the youth by showing him a magic sword, a steed, an invulnerable suit of armour, and six magically frozen knights he will command when he turns 21. The impatient George, however, tricks Sybil and locks her in a cellar, then leaves with the magical implements and revived company of knights. 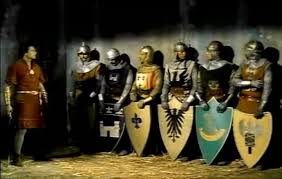 Sir George and his party appear before the king and insist on journeying to Lodac's castle to rescue Helene, against the opposition of Sir Branton (Liam Sullivan), a knight who had previously volunteered for the perilous quest. The king promises the rescuer his daughter's hand in marriage and half his kingdom.

Seven curses bar the path to Lodac's castle. First, they encounter an ogre, who slays Sir Ulrich of Germany and Sir Pedro of Spain. When George tries to save Sir Anthony of Italy from a swamp, Branton treacherously comes up from behind and kicks him in as well. Anthony is killed, but George survives with the help of his magic sword.
Later, Branton meets secretly with Lodac. It turns out that Branton has Lodac's ring, which the magician lost and wants back desperately. The kidnapping was solely intended to make Branton look good in exchange for the return of the ring. When Sir Dennis of France happens by, Lodac prepares a trap. Mignonette, a beautiful Frenchwoman, distracts her compatriot, then suddenly turns into an ugly hag (Maila Nurmi, best known to TV viewers of the 1950s as Vampira) who attacks him. Fortunately, George saves him with his magic shield.
Lodac finally becomes aware that George is being aided by magic. He contacts Sybil and mocks her abilities. Stung, she tries to cast a spell to help George, but ends up inadvertently stripping away all his magical powers.

Sir Dennis and Sir James of Scotland perish when they reconnoiter ahead. Branton then leads George and Sir Patrick of Ireland into a trap, revealing his partnership with Lodac before sealing them in a cave with deadly green apparitions. Patrick enables George to escape at the cost of his own life.

George sneaks into Lodac's castle and rescues Helene, only to be captured. The magician gives Helene (actually the hag in disguise) to Branton, but once he has the ring, he uses magic to put Branton's head on a plaque on the wall. George is tied up, but escapes with the help of shrunken prisoners. Sybil arrives and finally remembers the spell that restores George's powers, enabling him to slay the two-headed dragon and save Helene. Sybil steals the ring while Lodac is distracted. When the magician threatens the young couple with the seventh curse - himself - Sybil transforms herself into a large animal and kills him. The movie ends as Helene and George get married.

The film has a lot going on inside of it and on the out skirts of the plot. Basically this is a duel between wizards using magic items, a kingdom, love, and the fate of the nations of Old Earth. Make no mistake at all here. The dual here is between Lodac And Sybil throughout the centuries and the lands of Fairy are clearly involved.  The movie draws rather heavily from the mythology and folklore of Arthurian legend. According to wiki:
The film is notable for its many mythological and folkloric motifs and references. Each of Sir George's knights seems to be named after a saint or other figure associated with his homeland:
A 1606 book by Richard Johnson, Seven Champions of Christendom, lists the seven as St George of England, St Denis of France, St James of Spain, St Patrick of Ireland, St Andrew of Scotland, St David of Wales and St Anthony of Italy.[2]
Sybil, the name of George's foster mother, was also the name of a prophetess in Greco-Roman mythology, and furthermore there is thePerseus/St. George motif.
Lodac is possibly a wizard of very high level indeed with the backing of fairy for the right to entertain and amuse them using mortals as pawns.

Then of course their is Sybil whose got a great deal going on then simply setting up a power grab with Lodac here. We've got a prophetess/witch of high level and aspect whose spinning the fate of Old Earth nations and risking paladin's lives here. Not to mention she is spinning out the lives of the various royals and their children like something out of Dune.

Her ties to fairy must be pretty damn strong here and I'd say that much of the traditional witch motifs from games such as AS&SH are in full effect.
If there was ever a movie to provide excellent inspiration for a full paladin or caviler campaign in the AD&D first edition then this is it. Everyone gets the spotlight for a little while.
What is up with all of these enchanted kingdoms? Magic gets used here like its going out of style. The answer is pretty simple really most of the kingdoms here border fairy and vale here is so thin that it allows monsters to come through, spells to be cast without fear, and curses to dominate the land with impunity. It also means that all the horrors of fairy are also in full effect. Imagine the horrors just waiting to be unleashed upon such an unsuspecting world. Its really no wonder that this world needs clerics, mages, wizards, paladins, warriors, and cavilers.
There has always been a line with Sword and Sorcery as well as high fantasy. Could it be that the fate of this world is being decided by these two. Could Sybil and Lodac's game and dance be deciding the fate of this world before its taken by fairy, fates away into the Nothingness, or becomes fodder for another Conan cycle of life and destruction?  Anything is possible for your campaign.
The film also features one of my all time favorite screen dragons! 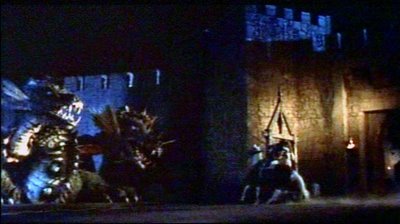 This film could be used as a bridge gap to Old Earth in a game of AS&SH where the characters become caught up in another game between Sybil and Lodac with the fate of the knights seen in the Magic Sword once again. Do you let such valiant warriors die or save them from the frozen hell that the witch Sybil has placed them in?
Perhaps this film is the inhuman forces of fairy leaning into Hyperborea and the so called quests are actually tests to see if the warriors and wizards of the plane measure up or are easy pickings to monsters and forces alien to the planes of the North Wind?
Posted by Needles at 9:25 AM