Get It right over
HERE
The Face In The Abyss is one of the classics of weird fiction. Written with surprising complexity and general pulpy goodness. The tale is actually comprised by two separate stories combined into one volume.
According to wiki:
The Face in the Abyss is a fantasy novel by A. Merritt. The novel is composed of a novelette with the same title and its sequel, "The Snake Mother". It was first published in its complete form in 1931 by Horace Liveright. The novelette "The Face in the Abyss" originally appeared in the magazine Argosy All-Story Weekly in the September 8, 1923 issue. "The Snake Mother" was originally serialized in seven parts in Argosy beginning with the October 25, 1930 issue.

The novel concerns American mining engineer Nicholas Graydon. While searching for lost Inca treasure in South America, he encounters Suarra, handmaiden to the Snake Mother of Yu-Atlanchi. She leads Graydon to an abyss where Nimir, the Lord of Evil is imprisoned in a face of gold. While Graydon's companions are transformed by the face into globules of gold on account of their greed, he is saved by Suarra and the Snake Mother whom he joins in their struggle against Nimir.

The Snake Mother of Yu-Atlanchi. The Snake Mother of Yu-Atlanchi is a god of Law and a very complex one at that.
The struggles against the forces of Nimir, the Lord of Evil upon Hyperborea and across the multiverse. Her blessings are numerous but she demands total commitment from her worshipers with the battle against Nimir and his forces.
She is associated with love, life, and the forces of Law. She grants a strange form of immortality to her priests and priestesses. Since the fall of Atlantis her worshipers are far less numerous. But she has been making strides among the tribes within the underworld of Hyperborea.
Using The Face In The Abyss
For AS&SH 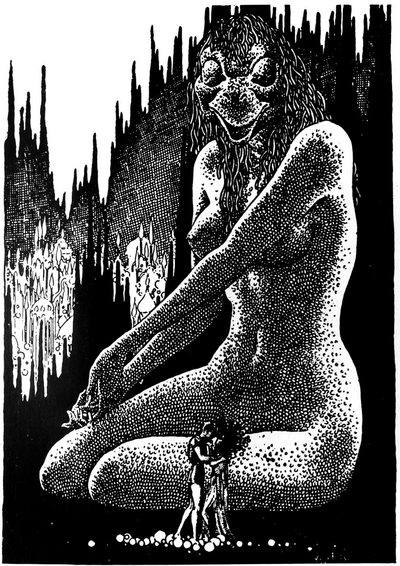 The Face In The Abyss has a lot to offer for AS&SH. The inclusion of a world behind the world for one. The complex cults of both Nimir and The Snake Mother with their weird other worldliness. Then the machinery of the immortality offered by the Snake Mother as well as the hook of the 'treasure' offered by the trapped form of Nimir.
There is a ton of stuff to use with this one. Its one of my favorites by A.Merritt.
Posted by Needles at 9:06 PM