What do we know … of the world and the universe about us? Our means of receiving impressions are absurdly few, and our notions of surrounding objects infinitely narrow. We see things only as we are constructed to see them, and can gain no idea of their absolute nature. With five feeble senses we pretend to comprehend the boundlessly complex cosmos, yet other beings with wider, stronger, or different range of senses might not only see very differently the things we see, but might see and study whole worlds of matter, energy, and life which lie close at hand yet can never be detected with the senses we have.
"From Beyond" Written November 16, 1920, published June 1934 in The Fantasy Fan, 1

Out among the ashes of the Boreas winds are worlds left by the gods as playthings. Things as a child might leave as they are done playing with them.   The World of the Dark Stranger is one of these. Some madmen and mages believe the place belongs to Aster or one of the other Old Ones. Many scholars and parties of adventurers come for the Old Earth artifacts, artworks, and treasures simply lying in around to be taken. They are wrong for the world belongs to the demon lord of the Undead Orcus and his avatar the 'Dark Stranger'.  The Dark Stranger is part of the universe of Dune point which has folded itself away from normal time and space.  The place is caught within a time loop and each night  the Old Earth town of Dune Point is part of the so called Waiting. A time when a blood red full moon rises in the night sky.
The true nature of the residents of Dune Point is revealed. All thirty thousand residents show themselves as true Ghoul blooded monsters.

Each night at the town strange things happen, shadows crawl about on the skylights, and the town crawls with monsters. Each has a  body temperature is 85 degrees. Each is dead, but thinking and moving about, and suggests a connection to the legends of  vampires as fully sentient and aware of what they do. there are some who  feel remorse and  actively fight  the 'condition'. Meanwhile, each night, creatures gather on the beach in front of bonfires, staring straight up at the moon. The locals call it 'The Waiting'. These 'vampires' will eat anything: dead vampires, dead people, live people, live animals, etc.

With the rising of the Blood Moon things quickly get completely crazy , every resident turns into a monster, and the titular Messiah of Evil - the dark stranger, a former minister, and a Donner Party survivor from the late 19th century turned vampire/cannibal, returns. He says he has come to lead his people up the coast and inland, to spread his 'religion'. Those still living get bitten on the neck only to spread the religion of evil and horror.


Standard saving throws  from AS&SH must passed or the repercussions are dire.
Those bitten gain +2 on strength and dexterity but -4 to intelligence as well as wisdom when the Blood Moon rises. They are truly of the undead forever caught between life and as a play thing of the Dark Stranger.  He will instantly know all they know and have access to their emotions, emotions, and become toys to the terrifying hungers of the Dark Stranger.
They will not age but they must feed every 1d4 days on human flesh for nothing else will slate this abnormal hunger.

une Point is another world caught within the grasp of the Boreas Winds beyond Hyperborea.
The world appears at the whims of the Dark Stranger and Orcus himself. Those wishing access must make the journey aware that they may or may not be aware of those who trespass upon one of their sacred worlds. Simply vibrational attunement  or the correct magical artifact may in fact allow those to make the crossing to this parallell world.
Many of the treasures found upon this world may be infected with the curse of the Dark Stranger and those who pilfer such things must have them vitally cleansed.
Many necomancers make the pilgrimage to this world to learn the secrets of the Dark Stranger but few return to use their knowledge. Many simply become ghoul blooded themselves never to return.

Plot and Commentary of Dark Messiah

Messiah of Evil is one of those trippy weird nineteen seventies films that has drifted into the public domain but it seldom used. Not unlike Carnival of Souls this film has undead, many Lovecratian elements and  a strange dreamlike atmosphere. I've used this one for a number of OSR games in the past and wanted to see if I could get away with it for AS&SH.
Its a weird one shot that might actually work with the right group of players. This was an interesting Halloween thought experiment. There is lots to mine here but this was originally an 'R' rated film.

The full plot according to wiki : 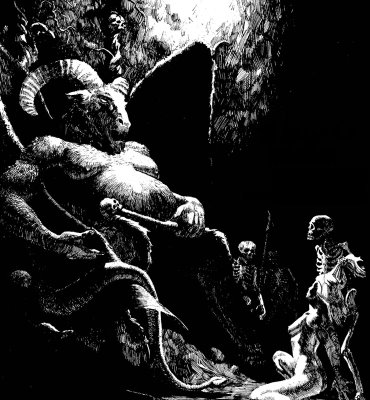