" My son you are so to be a man and you are already one of the best hunters for the tribe but you sense that all is not as it once was. I've taken you here in the mountains where the Auroras play and para monsters have court. Do not seek game here for it is foul tasting and tainted with the energies from above. Things were not always as you see them now my son. Let me tell you of my father's time, and of our ancestors time from long, long, ago. Back, back, in the mists of time when this world was a paradise of the old folk.
Once this world was a paradise of sun and the game ran red across the land. Mighty hunters came from another world to hunt here. Then At Lan Tus fell my son and the people to the South came and settled. But with the sinking of their homelands the suns fell in the sky and the game grew scarce.

The people prayed and turned to the worship of ancient gods,spirits, and those who would listen. But the favors of gods are fickle and their wrath great! Do not call upon the gods unless it is to observe the seasons my boy.
The Cloud Giants came and brought with them their machines and mighty medicine. For awhile all was good and plentiful. The world settled back into its way and the mighty Auroras sustained all. The fortress cities of the giants were seen by all and they crowded the skies. They brought many gifts and all was good for a time. But old hates draw old enemies and Ymir is a jealous old thing. And this world became their battleground. Ymir loosened his children and with them came the tribes of the North. The Kelts,the Amazons, and even your ancestors fought the peoples of this land. 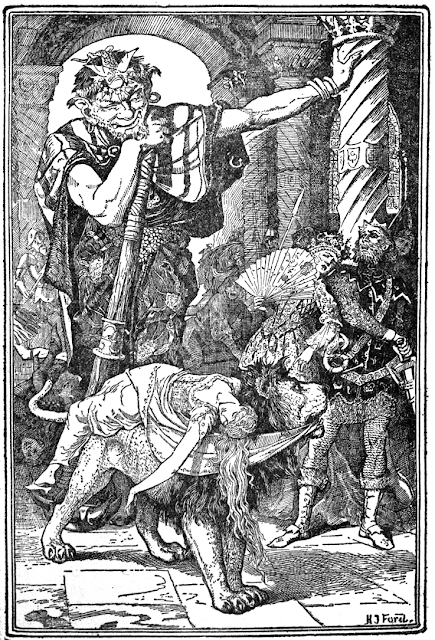 The Cloud Giants died by the score after one hundred years of a stalemate war my son. Their fortresses can still be seen out in the ash fields and nothing grows well there. The game is lame and twisted. But occasionally a gift from the giants is found. No good comes of those who wield their power. For a time a tribe's champion might become unto the gods but such things never last and do not become a play thing of the gods.
Beware the ruins my son for the dead will never rest easy around such places.

Remember my son that you always crack the skull of such beings and burn the body away from your long houses after battle. It matters not if they were wife, sister, brother, or fellow warrior. You do them a service when they are destroyed.
Even now the old hates return as Ymir's children feast on worshiper and friend alike. All grows cold under their gaze. Game becomes scare and we will soon move to the south as the stars become more terrifying in their travels. There will be more war and more bloodshed as well. The god kings like that. But we go where the game takes us.

I will tell you one more secret my son. The auroras flow with  the power of the Boreas winds and many travelers from many worlds come here when the snows are deep and weird .  Seek not the quick path of the wise men and the wizards who enslave men.
Theirs is not the way of the warrior my son. For they are unto gods one day and weak as children the next. Seek your steel and trust your spear arm my boy.
These will naught fail you.  Watch for those things of hell between where the wind and snows of many colours come. We must get back to the tribe now for long tooth is seeking us.  I will tell you more tomorrow when the suns set in the West and shadows grow long around us as is the way of men of our tribe."