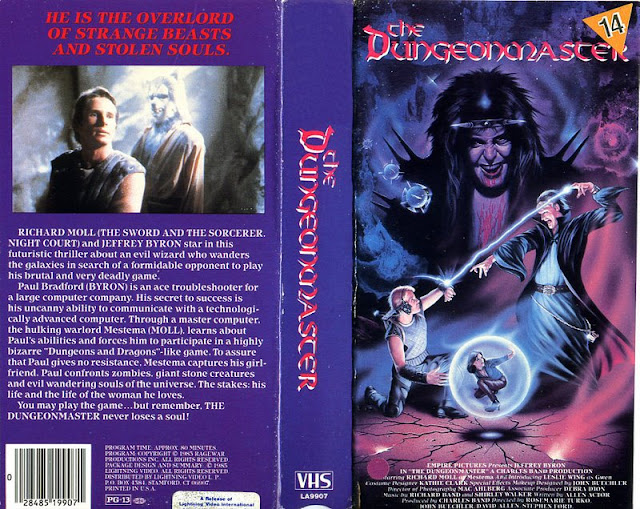 Mestema: "In a future reality I shall destroy you!"


Paul: "I reject your reality and I substitute my own.

There are bad and then there's Richard Band bad of movies. Back in the 90's I got into a number of his movies. The name is known among trashtastic,cult movie goers,video store owners and like. You can read more about Band right over Here
After reading the Torg rule book one night on break at the video shop I thought of this old movie. Flipped it into the VCR and hit play.
The Plot according to Wiki :

Paul Bradford is a skilled computer programmer who lives with his girlfriend, Gwen, and "X-CaliBR8," a quasi-sentient personal computer that Paul programmed and which he interacts with via a neural interface. Gwen is jealous of Paul's unusually close relationship with X-CaliBR8, to whom Paul has given a female voice, and fears that their relationship will be destroyed by Paul's reliance on X-CaliBR8 for his various day-to-day activities.
One night, Paul and Gwen are both transported to a Hellish realm presided over by Mestema, an ancient, demonic sorcerer who has spent millennia seeking a worthy opponent with whom to do battle. Having long defeated his enemies with magic, Mestema has become intrigued with technology, and wishes to pit his skills against Paul's, with the winner claiming Gwen. Arming Paul with a portable version of X-CaliBR8 (which takes the form of a computerized wrist band), Mestema begins transporting Paul into a variety of scenarios in which he must defeat various opponents. Most of the challenges involve Paul using his X-CaliBR8 wristband to shoot people, monsters, and objects with laser beams.
After Paul completes Mestema's various challenges, the two engage in a final battle, which takes the form of a fist fight in which Paul kills Mestema by throwing him into a pit of lava. After Mestema dies, Paul and Gwen are transported back to their house, where Gwen expresses her acceptance of X-CaliBR8 and suggests that she and Paul get married.

Using The Dungeon Master
The idea of a party being challenged by a minor demon lord/alien sorcerer appealed to me. Cross dimensional adventurers going at it balls to the walls against inter dimensional invader warlords and their minions. This was the chance for the PC's to get back some of their own against a minor inter dimensional warlord.
The basic plot was "The Dungeon Master Part II". Mestema, an ancient, demonic sorcerer who has spent millennia seeking a worthy opponents with whom to do battle. After letting Paul get on with his life Mestema plots and begins going through his collection of pocket universes.

Basically my version of Mestema is a demonic conman passing himself as "Satan" and selling tickets to his "games". Each of which takes place in a different pocket dimension.
He's got a few minor demon overlords at his command and a few "Empire of The Petal Throne"pocket universes to play with.

Rat Spit minor acolyte of Orcus and major pain in the rear. Commands 1d20 zombies at a time.
The situation lends itself to using any number of players getting zapped around these "dead planes" and getting themselves in huge amounts of trouble.
As a dimensional warlord  Mestema is a bit of a mid level threat.

He's conquered a few universes but he's small time. He's the perfect foil for a party as an introduction or as a huge threat. He's going to use demonic legions at his command. Use something rolled up from the Appendix D  "Random Generation of Creatures From The Lower Planes" page 194 of the Dungeon Master's Guide. A bit of irony there.
Let me restate here the idea .
The idea here is that the world is invaded by various realms each controlled by a Highlord.  First this is going to be a grind house version of Torg. In other words "B" movie versions of the standard rpg trope worlds. The worlds have changed slightly.
I first watched it as a kid, and was blown away by the utter cheesiness of this fiasco. The highlight was seeing WASP in one of the "vignettes" complete with the requisite rocker dudes and aqua net babes...what can I say, I found this movie again at a store for $5.00 last week, and could not resist.
I've always thought of Mestema  as an evil version of the same race as the Dungeon Master from the AD&D cartoon. Each week causing the PC's more demonic grief and problems.

The group of players I had at the time last two months through this fiasco of a campaign and its only now a thought exercise. If you really want to piss a group of Kult or Call of Cthlhu players put them through this one.
Posted by Needles at 9:30 AM