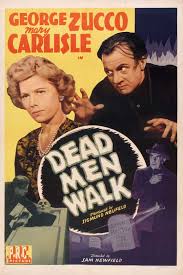 I actually like Dead Men Walk a vampire yarn from 1943. The movie is incredibly flawed but I've used it numerous times for  Call of Cthulhu convention games. It lends itself quite easily to a party of New England adventurers blundering into the situation. 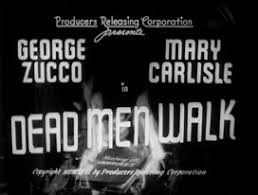 The plot according to wiki :


The story involves a kindly small-town physician Doctor Lloyd Clayton (George Zucco), who attends the funeral of his twin brother, the evil magician Elwyn, whom he has secretly murdered because of the latter's deep involvement in the occult sciences. Evil Elwyn's hunchback assistant Zolarr (Dwight Frye) suspects the good doctor of doing away with his master and confronts him on this matter, but the doctor swears that he only acted in self defense when his brother had become a danger to society. Unfortunately, the evil twin brother had gone too far meddling with the dark arts before his demise, and with the help of his assistant he returns to life as a vampire. The doctor and his beautiful young niece, Gayle Clayton (Mary Carlisle) soon discover that evil forces still are at work even after Elwyn's funeral and are horrified to learn that the resurrected Elwyn is set on a gruesome revenge against his brother and his niece.[1]
Full Movie 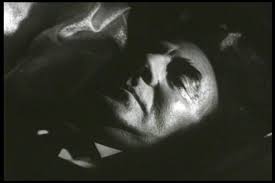 So there is actually quite a bit to mine here. We've got an entire cast of NPCS here.
There are a few differences between the vampires of Dead Men and many other movies.

Elwyn doesn't seem to need as much blood as other vampires perhaps because of his "Satanic" origins, He's quite psychically powerful  and has a few additional powers. He can remotely view anyone within the small town telepathically should he concentrate on them. He's able to fade in and out of shadows remotely traveling, can project nightmares into his victims, and cause all kinds of trouble with his knowledge of black magic.
He's got quite the Alester Crowley aura about him. He also seems to an anthropologist or an adventurer in his own right. He's traveled the world in his search for black arts texts and artifacts. Even after his destruction at the hands of his brother there could still be hidden caches of books and artifacts just waiting to conjure up all kinds of trouble.

His hunchback assistant Zolarr is another interesting case. He must be his master's acolyte and might have the based of  black magic knowledge. His master didn't share any real secrets and must have been holding back on him. At most he manages the day to day business for Elwyn. However there was something of the savage psychopathic murderer about him. He might have been doing far more then being a mere servant and might have been a closet serial killer in his own right. He might have been stashing some loot in hidden places.

The Doctor Lloyd Clayton had his own secrets behind his claim country exterior. He may or may not have murdered Elwyn. There are some real cagey secrets about this man. He comes from money, is very well educated and seems to know a bit about the dark forces on his own. Growing up with his brother must have prepared him for the final encounter. It didn't take much to push him into the position of believer of the occult. Does his soul rest easy these days after the final push with Elwyn?

The doctor and his beautiful young niece might be the perfect foil for adventurers should the vampire ghost of Elywn return. Both of these nice folks have had more then a brush with the supernatural and the dark forces of Hell itself. As patrons,doctor, and more these folks are perfect for victims or as assistance to a small town New England party.


Happy Gaming and enjoy!
Posted by Needles at 10:56 AM