Grave of the Vampire For Your Old School Horror Campaign 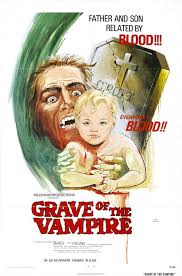 The plot line could be right out of  Tomb of Dracula and has quite a bit to recommend it for old school gaming.  The plot sound pretty simplistic -
Several years after his death by electrocution in the late 1930s, ghoulish rapist/murderer Caleb Croft (Michael Pataki) rises from his crypt and brutally assaults young Leslie Hollander (Kitty Vallacher). Leslie becomes pregnant by Croft and delivers a baby boy, whom she nurses with bottles of blood. The child matures into the ruggedly handsome James Eastman (William Smith), who sets out on a mission to find and kill his diabolical father. Eastman enrolls in a college, where his father is teaching as Professor Lockwood. Following a séance hosted by the professor for his students, James confronts his father in a showdown between good and evil.

"James Eastman: [voiceover] My mother found it difficult to tell me that I wasn't like other children; I could never share a life with whole human beings. I slowly learned that the thing that raped my mother and fathered me was no living feeling man, but a malignant force of cancer that refused to be destroyed. It wasn't only her blood my mother gave to keep me alive, her youth and her own life was sucked up into the syringe that fed me. "

Grave of The Vampire Movie

There is a ton of stuff to mine here. The ghoulish rapist/murderer Caleb Croft is a perfect vampire to use in a OD&D horror setting or even Call of Cthulhu or Kult. It took quite awhile from the time he rose from the grave till he confronted his son. The fact is that he's been around since the 1700's. Who knows how many children he might have fathered?
Then there's the matter of a certain book known as Mysteries of New England. It contains the entire mystery of Caleb Croft and his assumed names and facades. The book might also speculate on the true nature of Croft's vampirism. The various unsolved crimes attributed him along with a sprinkling of other murders and mayhem. The book also seems to be a limited run publication and tied to the local lore. Very common for a book of scholarly or academic credence.
Croft's bloodline is a bit unique. He has the tradition powers of vampirism but seems to concentrate on the physical and mental aspects of his curse. There's a sort of weird animal magnetism that goes with his curse. A bit of the dark predator lurking just in his eyes and a definite damnation from Satan himself.
Then there's the issue of the hybrid  James Eastman already growing up we see signs that he has some of his father's curse running through his veins. Just little things but the signs are there throughout the film.

The hybrid James Eastman becomes a full vampire at the conclusion of the film and is unique because he becomes cursed by his father with the dark forces that surround his damned state. He's also the bridge gap for a modern Eastman line.

+1 to strength, +2 to intelligence, +1 to wisdom, and +1 to Charisma. The Eastman/Croft line has a propensity for Spiritualism, Necromancy, and murder. The line has a psychotic attraction to violence and tragedy.  The player gains all standard weaknesses of the vampire with the addition of being haunted by ghosts and memories of his former victims.
Using Grave Of The Vampire 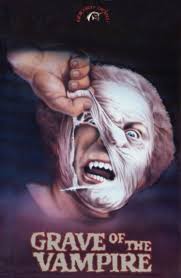 Gave of the Vampire is over the top, melodramatic, and was made for 50,000 back in 1974. The film has so much potential. It takes place within the New England states and could be used as a great jump off point for any number of games. The dialogue is so over the top that it reminds me of Marvel's Tomb of Dracula.
This movie could offer a great break in the usual mythos action of the Call of Cthlhu game. A chance to get into the action of tracking down the Newman/Croft affair and its cover up.
Alternatively this movie might offer a Kult party a chance to delve into the affairs of the Croft/Newman family. A family that has experienced the horrors and beyond around New England. A great change of pace from the usual affairs of the Undead within the illusion.
For OD&D the Croft bloodline might have some very dark history behind it. Croft is a powerful vampire and may in fact have a very dangerous family history dating back centuries. A prequel game adventure set during this time period might track down the beginnings of this dark past.
Grave of The Vampire is a unique take on the vampire legend and tied directly into the New England tradition of witchcraft and vampirism.
More coming up in the New England tradition of Dark Corner gaming.
Posted by Needles at 11:01 AM