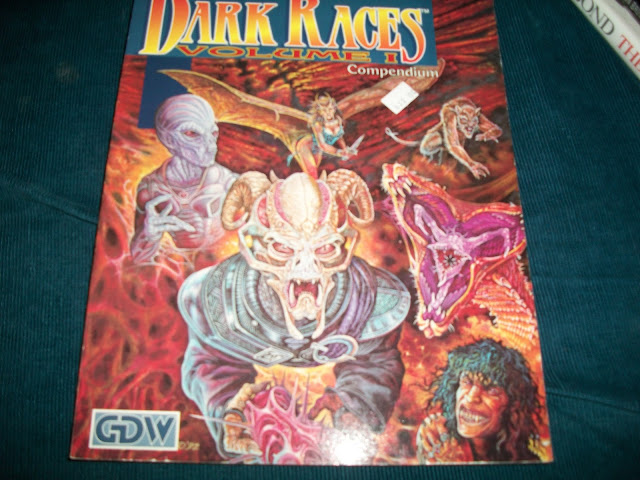 "Dark Races, Volume 1 Compendium
"This first Dark Races Compendium is designed to maintain that sense of horrifying mystery central to Dark Conspiracy adventures. Within the pages of this volume, referees will find more than 50 Dark Minions from the feverish visions of a dozen and a half different authors. Many of the creatures herein are the stuff of often-repeated legends of darkness. Others spring from more private nightmares..."

There are somethings that any DM can always use. There is one constant & that's there always needs to be more monsters but these aren't your ordinary rank & file nasties. Instead these are far more then meets the eye with them. 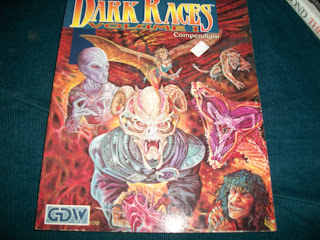 These monsters have a very horror science fictional feel! Each is unique & weird enough for several adventures. 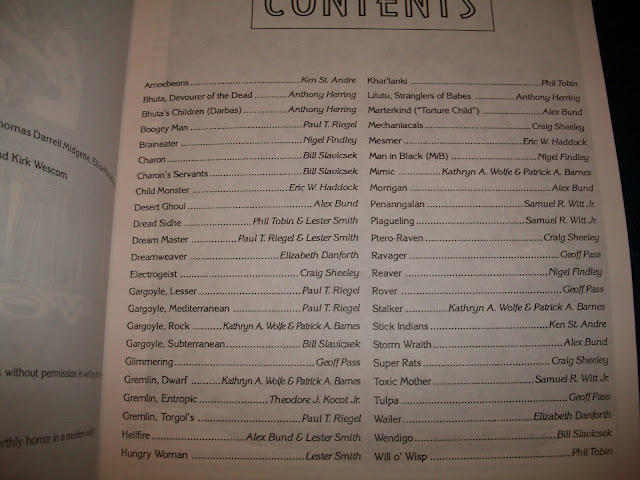 The book is done with sold writing & some really interesting B/W artwork. These are not the usual minions found in the DC rule book. Instead these are the more advanced creatures waiting in the wings to take down your PC adventurers! 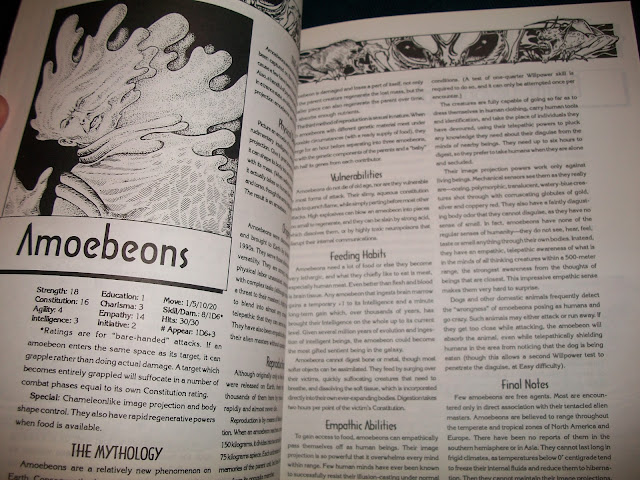 Each monster is nasty dangerous & acts as both the center of an adventure or the end of one. Many of them are very, very, powerful almost on par with a Dark Lord itself. 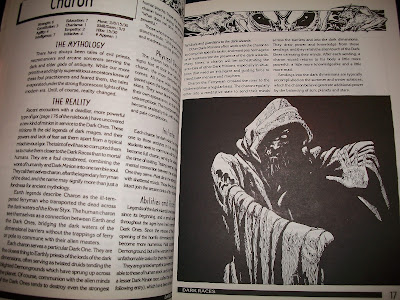 "Many of the creatures herein are the stuff of often-repeated legends of darkness. Others spring from more private nightmares.." The legends  & mythology are included with the entries along with the actual background. 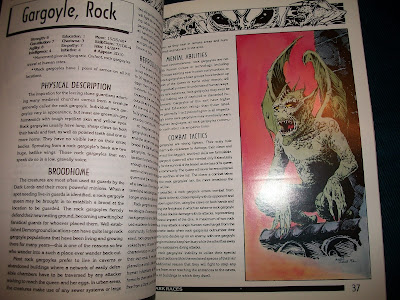 Each of these things is either a campaign starter or stopper.

Using Dark Races In The OSR 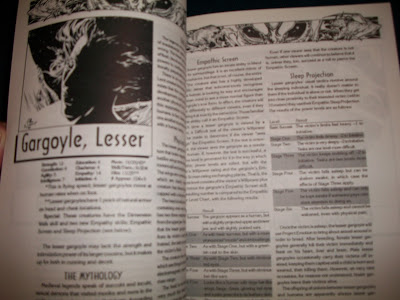 These aren't the random monsters of OD&D or the wandering kind from AD&D first edition. These monsters are instead the center of the adventure itself like many horror novels, movies or television shows. They're either the center of the piece or the right hand of the villain. 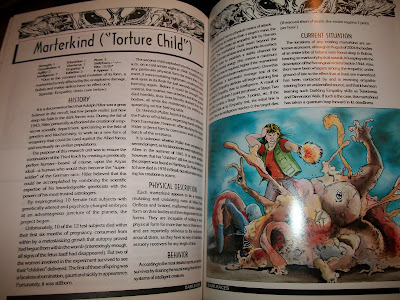 The entries are devided into the legends behind the thing. The reality of who or what it really is & a quick overview of the creatures itself. The monsters are actually interesting & cool. 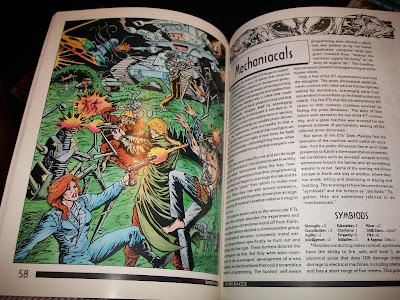 The psychal description are not simply what it looks like but also the flavor of the creature.
The combat abilities are one of the places where the book really shines. This is the meat & patatoes of the monster. How it reacts & uses its powers.. Its capabilities in combat for the PCs.This not only gives the flavor of the monster but the sauce of its attack. 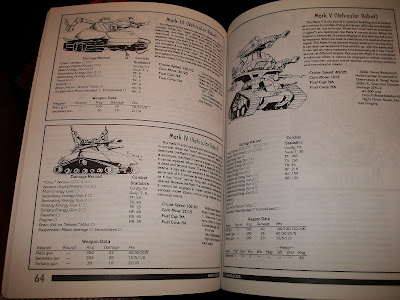 These entries also show how easily convertible to your favorite retroclone or 1st edition AD&D. The monsters would fit right at home in the atomic wastelands of your favorite post apocalyptic game. Mutant Future & Mutant Epoch would be perfect places to spring board these monsters into the broken future with little changeover 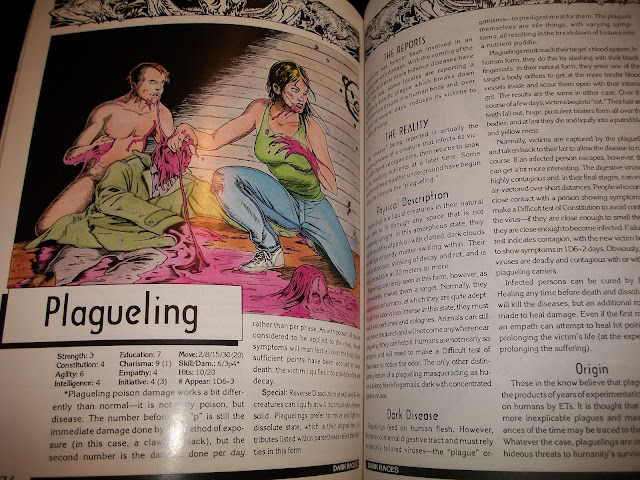 The artwork runs from the weird to the really odd & there's the occasional goofy piece as well. Some sections are in color while most of the book is black & white. There is a horror movie feel to many of the monsters & several are out right thefts from popular movies of the time. This isn't a bad thing, because the creatures will keep your players on your toes 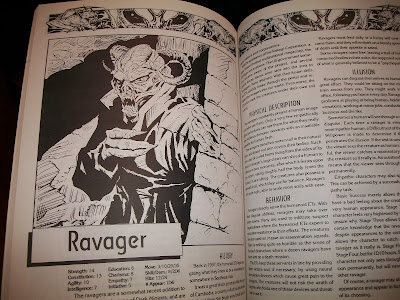 Many monsters could double as magical familiars for your favorite mutant wizard or cleric of an evil god! These creatures are often times minor powers unto themselves capable of some measure of power beyond themselves. 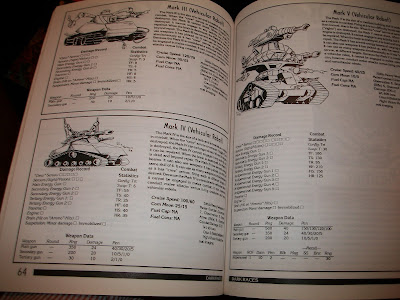 There is another element to this book that was only found in many of the "Chill " rpg products the idea of culturally found mythological monsters. If the PCs had a mission in South America then these would be the mostly likely encountered creatures. The monsters actually reflected the mythological & mystical traditions of their country of origins. This didn't mean that this is the actual reality however. Simply this might what be your PCs could encounter.

Many of the monsters also could be used to generate the whole adventure. An idea often seen in the Johnny Quest Saturday morning cartoon show. This is where the monster is the actual adventure. The creature strikes from shadow causing the PCs to be uncertain of its capabilities & powers. The players fear the unknown allowing the DM to deal the monsters on a case by case adventure by adventure basis. This idea was seen in various pulp stories & horror comics of the 20s,40s & 50s.
The bottom line is that this is one of the best books for a DM to get a hold of for horror gaming. I've used these bastards in a number of games, Torg, AD&D, Mutant Future, etc. The approach of the book allows for easy conversion & deadliness in any number of games. At five dollars on Amazon this is one of the better bang for your buck rpg books.
Posted by Needles at 12:16 AM