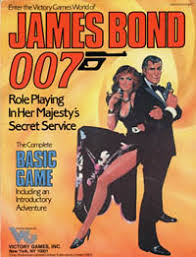 "Experience the life of a secret agent... work for M.I.6, the British Secret Service, or assume the role of the most famous agent of all... prepare yourself for endless thrills, high-living and danger. Reach out for excitement in...
The World of James Bond 007
• Careen through high-speed chases...
as you track down villains or escape their evil henchmen!
• Pit yourself against ODD JOB and JAWS...
and thwart the plans of Dr. No and Goldfinger!
• Choose your special skills as an agent...
weapon and vehicle handling, hand-to-hand combat, gambling, mountaineering, demolitions.
• Select your equipment from Q Branch...
have your weapons and vehicles modified to suit each of your missions!
Obtain the Coveted "00" Rank:
Your Licence to Kill!
The Fully Illustrated Basic Game
All the information necessary to play the game is provided to the Gamesmaster and players, plus an introductory adventure - The Island of Dr. No!"

1983 ... VG 35000 ... ISBN 0912515007"
The James Bond Rpg came out from Victory(a division of Avalon Hill) games in 1983 & was a part of a Christmas present back in Dec of '83 from the big Sears Catalog. The box set along with the Q Manual were waiting for me that Christmas You might as well have handed me a loaded gun! Seriously this game blew everything else out of the water!
The rules were well laid out & very cool but there was something about the game that was different.
The game had something about it that allowed players to really plunge into the cinematic elements of the movies. The Hero points were an element that allowed the player to take the PC as his own. Agents right out of the gate weren't rear wipers they were proper agents being sent into the mouth of hell.
Who was the enemy? Well according to wiki : "One notable exception was the villainous organization SPECTRE and its leader, Ernst Stavro Blofeld, the rights to which were contested by Kevin McClory, so in the game, they were replaced by a similar organization called T.A.R.O.T. (with a Tarotcard theme), led by Karl Ferenc Skorpios"  T.A.R.O.T. was actually a much, much better choose. Within our games in high school there had been a war between SPECTRE &  Karl Ferenc Skorpios. Skorpios won & the world paid for it.
The Adventures & The Horror Of Bond
There was one very interesting element of the Bond Adventures. The writers learned a very neat little trick that I would later see used in the West End Star Wars Rpg.
According to Wiki : "The game was licensed from both Danjaq/Eon Productions, which holds the film rights, and Glidrose Publications (now Ian Fleming Publications), which holds the literary rights, and tried to be as faithful as possible to both the books and the films as circumstances permitted. However to challenge the players appropriately, key plot elements in the modules based on the films were changed with the open warning to players that exactly imitating Bond's choices and actions in the film's original story would be dangerous. For instance, in the module for Live and Let Die, the players learn that Mr. Big and Doctor Kanaga are definitely two separate people rather than Kanaga playing the New York gangster in disguise. In addition, the module for You Only Live Twice is largely rewritten to eliminate the outdated space hijacking scheme to a plot to investigate the crash of a Soviet space station that crashes near Japan and deal with the reported bioweapons being researched on board."
More then a few times I saw the players look at a module & think they were going to play the film! They game actually took some of the basic ideas from the film & the book . Then it would skip off in a different direction. This allowed the players a chance to be the stars not Bond.
There was another game that had a similar way of handling horror at the time.

Call of Cthulhu, 2nd Edition (1983) was a revelation. The system was also percentile based & although the elements were different to the brains of a teen, it didn't take much to overcome & adapt. The DYI attitude of the OSR were decades off but we were dealing with whatever we needed to at the time.
Tarot became the front for a world spanning call of Cthlhu cult. Monsters from Chill were dealt with & everyone had a jollly good time!

The Bond game had a few elements over CoC which allowed characters to have a more survivality factor. The Hero system was a part of it. The combat of Bond was another part of it. We were playing the films that our young hearts wanted to see.
Pure CoC would come much later.
Anatomy of an Adventure

Lets take apart one of my favorite adventures
"BRIEFING: Two top M.I.6 operatives, working with the C.I.A. to uncover drug mugglers in New Orleans and on the Caribbean island of San Monique, have met suddent and mysterious deaths. Now a third agent, who had been observing Dr. Emman Kananga, the Premier of San Monique, has been found dead in his New York hotel room. All three deaths have occurred within the last 24 hours. Is someone simply out to destroy the British Secret Service, or is there some more ominous link that unites the three agents in death?MISSION: Unraveling the threads of these murders takes you to New York, New Orleans and San Monique. At these locations you will find clues to a master plot that threatens to undermine the very fabric of American society. As you penetrate into the mystery behind the deaths of your fellow agents, you will find yourself confronting the dark powers of voodoo, encountering the lovely and mystical oracle Solitaire, and defying the cutthroats who work for the American gangster known as Mr. Big. Your life is in the balance, for the next card to be played is Death!"
The adventure is at its heart a weird mix of Blackexpoilation film and Bond. The whole thing comes off today as weird & slightly horrific. The key here is that the adventure is actually pretty fun.


The players are sent to deal with the dual problems of  Kananga & Mr.Big. Both the film & the adventure use racial  sterotypes that are larger then life. The whole thing screams fun & if the horror aspect is pushed to far then it drifts into Angel Heart turf. You lose the whole point of the adventure.
There are lots of differences from the movies such as:
Using the world wide cult idea its could be just as easy to plug in a UN based organization with superior operatives.
The United Network Command for Law and Enforcement could just as easily be slipped into the adventure & still be just as playable.

So where could this whole affair connect to? What sort of cult would have the money, personnel  & resources to pull something like this off? 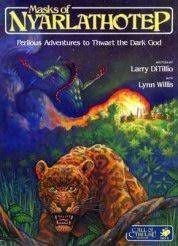 The cults from this relic of the past come to mind. Kananga & Mr.Big. could both be high level operatives of the cults of the many faces of  Nyarlathotep
There could be threads of this running throughout history. After all given the history of the various world spanning organizations there could be lots of interaction & trading going on.
Some final James Bond Rpg Thoughts

There were some very, very, good solid supplements for the Avalon Hill  James Bond Rpgs. These were & still are really useful. They provide a whole lot of information for just about any horror or spy related game
This is the list according to wiki: .