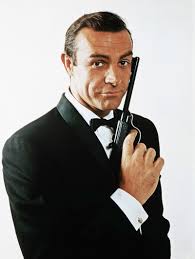 The world was rapidly changing in the 60s there was more unrest then ever before on the world stage & things were starting to heat up in a very cold war. The legacy of WWII was still echoing down through history & technology was rapidly changing. The communists, terrorists, & other external threats were rampaging across planet Earth.

England had already had otherworldly contact in the form of  The Quatermass & The Pit Affair in 1958 &  its after effects in 1959. Contact with the "Doctor" in '63 really shook the foundations of the interior of the British secret affairs group part of the  British Rocket Group, & precursor to Unit.

The world of that James Bond came into was described by a writer of Pravada thus:
James Bond lives in a nightmarish world where laws are written at the point of a gun, where coercion and rape are considered valour and murder is a funny trick ... Bond's job is to guard the interests of the property class, and he is no better than the youths Hitler boasted he would bring up like wild beasts to be able to kill without thinking.


By the time Dr. No had come out in '62 the world felt the weight of the super human. The Fantastic Four had debuted & made a splash with their appearance. For better or worse the super human was back. World War Two hadn't killed them all or retired them.  The old nemisis of the Si Fan hadn't gone away at all. It mutated into to two organizations & multiple splinter groups. Spectre & Thrush. The threat had of these two had been uncovered by operatives in 1959.  For more information See Here  & also see Thrush Here


The Idea of the "00" s is very simple. For a time a top operative takes on the identity of one of them. His old identity is gone or erased & he operates for M-16 as their visible asset. Thus allowing his enemies to think there is a high level semi immortal being on the pay roll of M-16. There are many such entities working out there within a world where super humans, freaks, deviants, & mutants are the norm. You see right after the Dr.No affair in '63 the X men appeared followed by the menace of Magneto! The world was never the same.

There are some assets who are not expendable & have given their all in the line of duty. The organizations they run see them as the ultimate in operatives. So they are given any number of risky & controversial technologies. Many of these were side projects & military super soldier technology applications from such folks as the Quest Group & many others.


The idea of an operative whole doesn't age like the rest of us is something that offers endless boundaries of horror & depravity. The hero becomes devil & so forth.
Even the regular Bond books give Bond an uncanny youthful appearance. Coincidence I think not. These immortal operatives are easily controlled. Then again not always.

1971 marks the end of an era when the whole glass ceiling of the super spy game seemed to almost come to end for the whole world with the Ernst_Stavro_Blofeld almost causing total nuclear chaos.


The legacy of 007 isn't one of gadgets, girls, & guns. It all leads into the inversion of that trope

John Drake is the opposite number of everything that James Bond stands for.
Danger Man is as follows according to wiki :
"Every government has its secret service branch. America, CIA; France, Deuxième Bureau; England, MI5. NATO also has its own. A messy job? Well that's when they usually call on me or someone like me. Oh yes, my name is Drake, John Drake."The Plot :

"Unlike the later James Bond films, Danger Man strove for realism, dramatising credible Cold War tensions. In the second series, Drake is an undercover agent of the British external intelligence agency (called "M9" instead of the actual MI6). As in the earlier series, Drake finds himself in danger with not always happy outcomes; sometimes duty forces him to decisions which lead to good people suffering unfair consequences. Drake doesn't always do what his masters tell him.
Developing a rule established in the first series, Drake is rarely armed, though he engaged in fist fights, and the gadgets he uses are credible. In fact, most were off the shelf, and their appearance in the series spurred sales of such commercial items as the folding binoculars (Battle of the Cameras) featured in the American title sequence and the sub-miniature Minox camera. Unlike James Bond, Drake is often shown re-using gadgets from previous episodes. Among the more frequently seen are a miniature reel-to-reel tape recorder hidden inside the head of an electric shaver or a pack of cigarettes, and a microphone that could be embedded in a wall near the target via a shotgun-like apparatus, that used soda siphon cartridges containing CO2 as the propellant, allowing Drake to eavesdrop on conversations from a safe distance.
Agent Drake uses his intelligence, charm and quick thinking rather than force. He usually plays a role to infiltrate a situation, for example to scout for a travel agency, naive soldier, embittered ex-convict, brainless playboy, imperious physician, opportunistic journalist, bumbling tourist, cold-blooded mercenary, bland diplomat, smarmy pop disk jockey, precise clerk, compulsive gambler, or impeccable butler."
The series ran " 1960 and 1962, and again between 1964 and 1968" The series ends in only one place

There were villages all over the world where various agents & operatives "retired"
The village & evirons might still be in operation to this day! You can of course read much about the Danger Man & Village connection right  Here
The uses of these locations in horror is easy & well known. The ghosts & specters of aging spies & operatives is a trope that can easily be explored.

Bond & his spy fi movie rpg connections are well known. In part III well explore some of the uses of the horror aspects of the series.
I've recently made use of the Bond legacy in a game of Top Secret