So the Connery era ends with Diamonds Are Forever & then we get into a sort of murky period where the cold war heats up & things get weird foreign policy wise. There are very few details of the era before the  Moore took over the role of Bond. This makes it a perfect time for options & role playing. The cold war chess game in the super spy business had revealed the terrible cost to human lives, resources, & things man wasn't meant to know. There were of course options even in the early halcyon days of role playing.
The Top Secret game was one easy to digest one & there were others as well
Bond before the James Bond Rpg 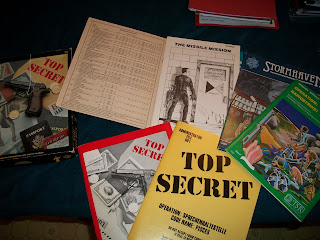 Top Secret 1st edition  was & is a great game warts & all.
The game reads something like out of a cheap Saturday evening movie!
Here's what it is:
TOP SECRET includes everything needed to start playing your own adventures in the world of international espionage and intrigue: game booklet, introductory module, and set of percentile dice. The only other things necessary are a good imagination and a spirit of adventure!"
1980 (1st edition). 1981, 1983 (2nd edition) ... TSR 7006 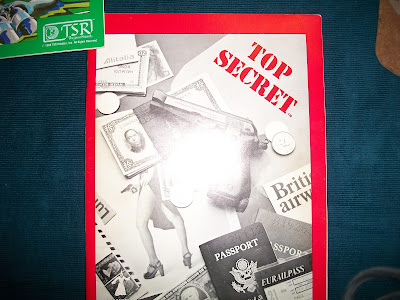 The Top Secret Rulebook every thing a DM needs to rule the world. Top Secret has always had its weird & highly dubious background lurking under its wholesome family cover. 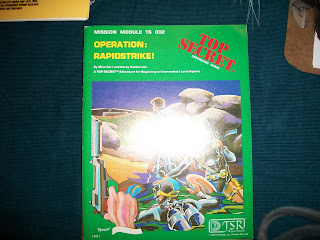 One of my all time favorites that can easily be used in the 2 years between Diamonds Are Forever & Live & Let Die. Operation Rapid Strike!
The module's Blurb reads as follows :
"Operation: Rapid Strike [Rapidstrike] (TS002)


"Nobel Prize-winning scientist Doctor Felix Fendelmann has disappeared from his laboratory/retreat in Switzerland. Genevieve Larreau - known to have contacts in the underworld, and suspected to have been involved in the industrial espionage of the Texacron Chemical Corporation - was sighted in the same area of Switzerland shortly before the disappearance of Dr. Fendelmann. Mademoiselle Larreau is reported to have developed a new and potentially dangerous "mind-expanding" drug. Dr. Fendelmann's Nobel Prize was for his research on chemicals and their effects on the mind. Mission: Neutralise Larreau and her operation at all costs!"

This is one of the dungeon crawls that Top Secret produced. See that's the nice thing about Top Secret. The adventures are generic enough to be used with just about any Spy Fy game out there. This makes things very easy to set them up into your campaign background & then push go on the players. For example
Texacron Chemical Corporation becomes a Spectre front company. Genevieve Larreau becomes an operative of that organization & they all blend easily into that 2 year span. The horror comes from the effects of Doctor Felix Fendelmann's little drug. Could it be a gateway to world's beyond the ken of mankind. What happens when the drug is released & is it a drug at all or a living bio weapon? The possibilities are endless with this module. 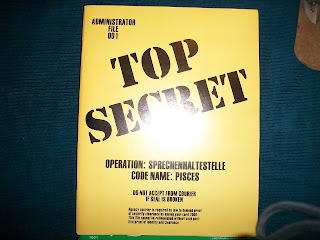 This is it. The introductionary adventure to Top Secret. Code name: Pisces & it lives up to its name this is essentially the Keep on The Borderlands of  Top Secret. The concepts, fringe elements, & even a bit of the high drama that have come to mark the game are there. Could elements of horror be injected into it? Yes but more over the elements of  Noir make make for a slightly different feel to this game. I've run this one countless times! The adventure is easy to play with & add elements of adventure & horror.
The basic plot works something like this:
"Screen includes module Operation: Executive One. "Agents must rescue the President of the United States from a squad of corporate mercenaries."
1982 ... 8 pages + 3-panel cardstock screen ... TSR 6601 ... ISBN 0935696792"


I've run this one by injecting an Escape From New York Style to the adventure so that the characters never knew from which direct combat was going to come. Add Escape from New York Style sound track & go. Always make sure that Q branch is a little understaffed! The module has a survival horror element if done correctly.


An Organization At Work
I've always used Top Secret & its adventure's as Bond's little clean up crew. These were the folks who took care of the mess that Bone left behind. The minions & monsters that seemed to be lurking under the surface of the various Bond films. 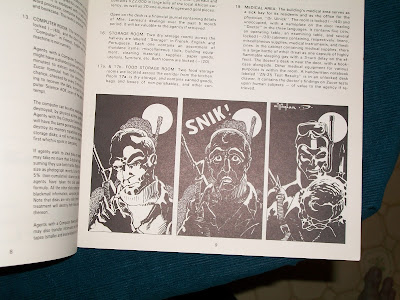 The Appendices in the Rule book always gave a DM more options for creating a grittier world, a world where the horror element of Spy fy really shines. The pulp style adventure was the bread & butter of the great  Bond films. It was & remains where the Top Secret game & its environs come from. 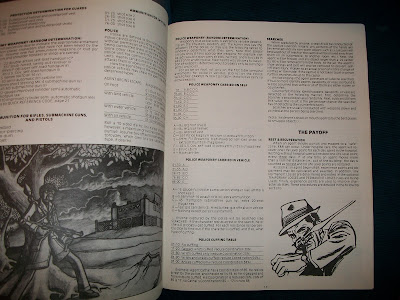 Because of the nature of the Top Secret game its actually very easy to mine bits & pieces from it for other games! The modules enable a DM to incorporate them into everything from a Shield style comic book adventure. All the way  to a solid Prisioner style Danger Man world with the elements of fantastic as they see fit. 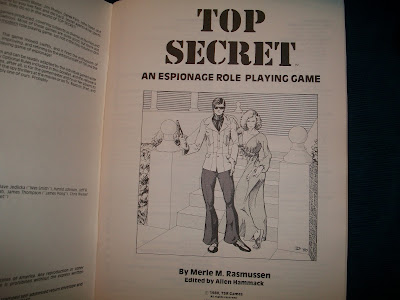 I've always used Top Secret's PCs as the low level agents that deal in the wake of the 00's. They really get to see the working of Spectre. There's always been this very strange cult like aspect of the organization. I've add a few Lovecraft monsters & projects here & there.
The noir/horror aspect of Bond really shows through with the Connery era. The places & situations are straight out of pulp in the best of the spirit. Its very easy to push things into horrors dark corners. Even today a DM might easily borrow some ideas from the game & run with them in all sorts of directions 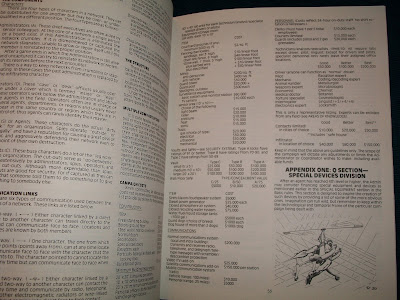 Before the James Bond Rpg ever surfaced this was the most well known game in town but not the only one. We'll cover those coming up. Thanks for your attention