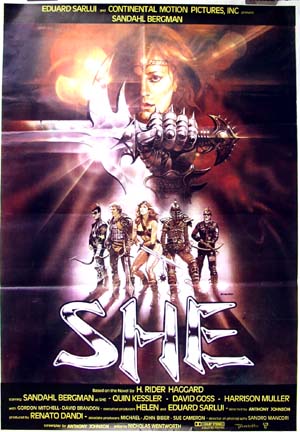 Godan? We don't worship gods. We do buisness.
This film came out right in the middle of the sword and sorcery chaos of the 1980's and it still has a cult following.
This film is a 5.8 on the Psychotronic movie meter and fits nicely into the slot of 80's sword and sorcery/ post apocalyptic movies. What does the film have to do with the HG Haggard novel 'She'? Absolutely nothing except for the title.
Instead we get an Amazon warrior out in the middle of a very 80's post apocalyptic landscape battling the forces of evil. Take the elements of this film add in Thundarr The Barbarian and you've got a continuation of the cartoon.
The film is done without tongue in cheek and its pretty serious business through which makes it all the more entertaining.
IMDB has  a pretty good breakdown of this film. In a backward post-apocalyptic world, She aids two brothers' quest to rescue their kidnapped sister. Along the way, they battle orgiastic werewolves, a psychic communist, a tutu-wearing giant, a mad scientist, and gladiators before standing against the odds to defeat the evil Norks.


With Motorhead on the soundtrack and action wound up, I was really hoping that there would be a part II like a return to the Valley of the Norks on tap. There was endless cultural 80's stuff thrown in here and the whole film is really entertaining in an 80's B movie kinda of way.

The plot according to Wiki :
Set 23 years after an event called "The Cancellation", the film follows Tom, whose sister is captured by a local tribe. He sets out to find and rescue her, while avoiding the dangerous tribes he encounters along the way. Sandahl Bergman plays "She" who ends up aiding Tom after he escapes from her. She decides to help after learning of a prophecy given to her by a local seer.
The heroes have to face a tutu wearing giant, a psychic communist, toga wearing werewolves and mutants bandaged up like Egyptian mummies.
This film is a 106 minute head trip into the awesomeness of the 80's. When I worked in that rental place in Boston this was always on the rotation of the VHS tapes.

Adapting For
'She' 1982 Sword & Sorcery/Post Apocalyptic Mash up Movie For An Old School
Sword and Sorcery Campaign
There are so many cross genre elements that this film could be used as a bridge gap between a sword and sorcery campaign and a post apocalyptic movie. The film is everything awesome from a Hargravian campaign ala The Arduin Trilogy in one adventure.

There are so many elements like Samurai, Ninjas, a Frankenstein robot, guys dressed up like mummies,  there is even a scene where the party almost get smashed like in the garbage chute in Star Wars and more!
An encounter with a telepathic mutant who has appropriated communist symbols and has the women tortured. Warriors in tutus and gas masks be devil the party.
A soldier dressed up like a pre-revolution French nobleman with the wig and powdered face.  A cult of  werewolves in togas, and a post holocaust style gladiator battle in the Nork compound, among lots of other stuff (also, boobs). Oh yeah, and Motorhead on the soundtrack! This film would be a great bridge gap for Mutant Future and Labyrinth Lord. Add in some of Tim Snider's Thundarr the Barbarian stuff from his source book and your ready to go. From HERE
Please don't crucifiy me for the following.

If you don't take your AS&SH campaigns seriously then this film has lots to offer.
If you want a DYI post apocalyptic 80's Italian nuclear wasteland film that can be adapted into your very own campaign of Astonishing Swordsmen and Sorcerers of Hyperborea. This is it. About 90% of the elements of the film are already within the game itself. Add in your favorite modern twist to it and your ready to go.
The lady adventurers in the film are classic examples of Amazon and barbarian classes if there ever were. The weirdness of the setting of the film is classic Italian POA and can easily be adapted into AS&SH.
The weapons, groups, technology, etc are lurking in the background of the AS&SH box set already. Add in Motorhead soundtrack and your ready to play.

This film was released a couple of years ago on DVD in the U.K. and I haven't seen a director's cut from Shout Factory or anything of the kinda. This is the type of film that only comes around once in a great while. I don't think that the world could deal with a part II of this awesomeness.