There are comics that kinda stay with you long after you put em down. Hellhound was an effort by Marvel's Epic imprint. The artwork puts it some place around 1993 or there abouts.  John Miller was the writer and Floyd Hughes the artist on this one.
This was one series that didn't pull punches, oh this one didn't have huge explosions,mutants or Marvels in it.
The title concerns a Hellhound, a damned soul who serves hell by acting as a bounty hunter or skip tracer for the Devil. This series was one of a long line of those weird 90's titles that had echoes of 70's goodness like Ghost Rider in them.

Those titles teased, painted, and played hints about the characters damnation. Not this title. We've got a title from the Clive Barker school of horror where you get everything spelled out in black and white.
The character is the damned soul of John Roberts   a former Blues guitarist who teams with William McCarty .  They are sent  after the soul of Marie Laveau whom it seems has returned to Earth healed the sick, restoring sight to the blind, making the lame walk. She's generally making a mess of the Balance for all the powers of the after world.
The powers of Hell can move the soul trackers across space, time, and whatnot to the location of the soul that they're tracking within about a fifty mile radius. In this issue they're transported to 1988 New Orleans and the middle of the Blues Quarter. This whole series is one long love letter to the Blues you see.
There they have a clandestine meeting with the angel Gabriel and find the direction of Marie's Voodoo cult. By voodoo here I mean what passes for the Hollywood version here. They track her down to a swamp and well things don't go well at all. Our Hellhound and partner  get their rear's handed to em. It seems that Amon an angelic god is Marie's body guard and they get a simple ass kicking.
That's simply issue one folks. Two get's even better but we'll come back to that.


Of Hellhounds, Satanic Panic, And The Cosmology of D&D

Way back when this series premiered Satanic Panic with D&D was sort of dying a slow death in many parts of the US. Not in my neck of Connecticut mind you but then sometimes you have to deal with things. World of Darkness from White Wolf was in full swing back then. And you'd think that D&D couldn't compete. We'll I used Hellhound and a few D&D style products to create a really interesting horror based campaign. I played pretty fast and loose with D&D cosmology and how dead souls were seen. One product that came in very handy was by Dragon Tree Press.
Dragon Tree Press's The Delian Book of the Dead
by Ben & Mary Ezzell, et al is a weird fusion of material, wit, wisdom, and sheer insanity with a phantom class for dead characters mixed right in.
Available right over
HERE

The product that made things interesting was from Mayfair Games, Sentinels was part of their Demon's line before it was shut down by T$R back then. The PC's were given Paladins and Cavilers traveling across the cosmos to deal with Hellhounds, the powers of various Hells and save the souls of Mankind. That's right this is actually a campaign rooted in the powers of Light with lots of shades of Grey thrown in.

Because of the low powered nature of the Demons line the material is easy to use with both AD&D first edition and OD&D a fact not widely publicized about over the years.Actually the Satanic Panic was great advertising and the campaign lasted three long years. It was lots of fun with players dealing with NPCs from across all of space, time, and history. Living, dead, undead, demonic, and angelic were met and dealt with.
Lots of fun actually. The Mayfair Demons line provided a good stand in for the Marvel Supernatural as well. 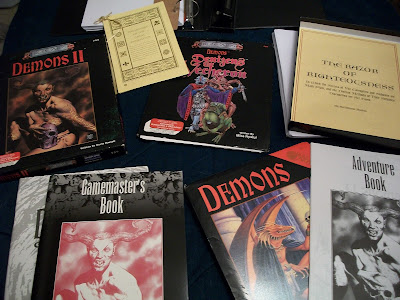 When dealing with the damned and dead one thing that always came in handy was a simple rule. Keep the power gaming low, the stakes high, and action moving.
If you like films like Angel Heart, and other classic horror films of this ilk this might be a series to check out. Its not well known and highly under rated.
Posted by Needles at 10:13 AM