I've just returned from a showing this afternoon of The Legend of Hercules in Waterbury Connecticut. This was really enjoyable popcorn CGI fest of a film . This film is based not on simply the Greek mythology but the Hercules Tharcian War comic book series. This Hercules has a bit in common with recent depictions of Hollywood Greek legends and less to do with the actual mythology. The film borrows heavily from the comic book source material. Hercules is a Radical Comics character who has appeared in two limited series The Thracian Wars and The Knives of Kush,
There is a ton of material to use as fodder for an AS&SH campaign. From locations, NPC's, monsters, templates for adventuring parties, etc. and even the soundtrack. The film borrows heavily from the Three Hundred sequel that just came out and the style of the film reminds me of an anime/live action hybrid. There's lots and lots of CGI blood, guts,and sword & sandal action here.
This film closely follows the Radical comics Hercules.
They have a definitive spin on the Greek mythology. In other words Radical comics has their own fingerprints on their version of the Hercules legend. 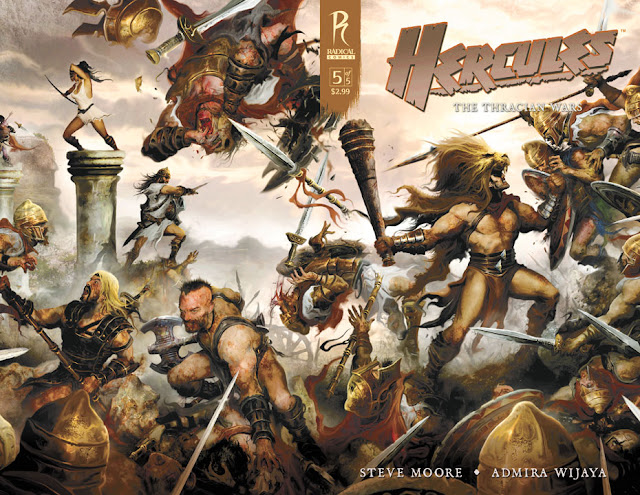 Blurb from Radical comics :
Nearly 3,200 years ago, a tormented soul walked the Earth as neither man nor god: Hercules, powerful son of the god-king Zeus, and for this he received nothing but suffering. After 12 arduous labors and the loss of his family, this dark, world-weary soul turned his back on the gods, finding solace only in bloody battle. Over the years, he warmed to the company of six similar souls, bonded by their love of fighting and the presence of death - never questioning where they go or who they fight, just how much they will be paid. Now the King of Thrace has hired these mercenaries to turn his men into the greatest army of all time, which means training them to be as bloodthirsty and ruthless as their own reputation. It is time for this band of lost souls to finally have their eyes opened to how far they have fallen - and the narrow, perilous path to their own redemption.
Here's the details of cast and crew according to Wiki:
Paramount and MGM is preparing to create a film adaptation of Moore’s ideas, under the direction of filmmaker Brett Ratnerand with the lead role going to Dwayne "The Rock" Johnson.[4] Aksel Hennie is cast in the role of Tydeus.[5] Rufus Sewell is cast as Autolycus.[6] Ian McShane has been cast as Amphiarus, part priest, part prophet and part warrior who is Hercules’ counselor. Reece Ritchie is cast as Iolaus.[7] Tobias Santelmann is cast as the villain Rhesus[8] Ingrid Bolsø Berdal is as the female lead.[9] Also joining are Joseph Fiennes, John Hurt, Rebecca Ferguson, and Irina Shayk. [10][11] Johnson's cousin, Tamina Snuka will be making her film debut in the film.[12]
It's worth the rental or the ticket price for a matinee. The cast does a decent job with the material. There's a ton of CGI and there are certainly worse and better productions when it comes to Hollywood mythology pictures. The Clash of the Titans remakes come to mind here.
Dwayne Johnson does a good job tearing up the scenery as Hercules but my god some of the dialogue is horrid. And a performer has to work with the script and direction their given.

Adapting The Legend of Hercules To AS&SH

Many of the cities and locations of the film are good stand ins for Khromarium locations. The production art and ideas here are pretty solid. Hercules and co. might feel right at home in AS&SH. There are certainly lots and lots of temples, ruins, and sacked locations that could be ported over to AS&SH. There is a definite sword and sorcery feel to this film by way of Hollywood.

There are echoes of New Amazonia and Port Greely in the film as well. The material, equipment, armor, rides, beasties are all available already in AS&SH. So adapting this material shouldn't present a problem.
The Hecules film city states might make excellent templates for AS&SH city states on Greek style islands.
The way Hercules and his cohorts get together as a party is pure OD&D sword and sorcery style.
That being said if AS&SH were going to be used to run this material as a campaign there needs to an spotlight on Fighters, barbarians, and more thieves. The grittiness of the film doesn't quite have the dust,grit, and crap I was expecting. But that is easily remedied in the forging fires of Hyperborea. While not quite as bad as the Clash of Titans remake there is a bit of that cheestastic over the top vibe several times in the film.
A note on the monsters of this film, each and every encounter is an epic one. Many of the monsters in the film are semi divine. Chess pieces of the gods if you will. Ninety percent of  the monsters are already in AS&SH but they're on the high end of the spectrum of the rules. These types of encounters might even be TPK's if the DM is unaware of this. Tread carefully with these encounters.
The film is a comic book come to life. The material is certainly sword and sorcery. I can't help but compare many of the elements to other recent CGI heavy mythological films. This might not be a bad thing. The film will easily put your players in the mood for this style of gaming.
There are lots of open ended storylines in the film, a DM could easily take advantage of several of these to weave a party into the action at several key points.
Hercules party isn't a low level AS&SH of PC's. There is lots of Trojan War level affairs that happen around Hercules. The man is a tragedy magnet. Which brings up another point. The gods of this film are really a bunch of asses. Be aware of how they treat the human beings of this story. It's subtle as a sledgehammer but they are not very nice as far as divine beings go.
There are are at least six different mega dungeon potential locations that happen as a result of the passing of Hercules.
Parties constructed using the film as a template are going to need several character sheets. The humans die like flies around the ever cool semi divine hero.
Conan would fit right into this world. Or at least his remake double would. Lots of the violence and gore here flies by so fast your going to wonder if you've seen it at all. There are parts of this film that remind me of the comic book tales of Robert Howard's Conan but very, very, loosely.
There are several supporting characters who might make fine teachers,masters, or patrons of AS&SH adventurers. Clerics and sages would play a very important part in a campaign of this style. Even though the film doesn't have nearly enough of them as front and center characters. They're always in the background of this film.
This film has Hercules and his supporting characters leveling up several times throughout the film. This film looks like it could take several months of constant weekend play to even equal half of the action here. A campaign of the film's magnitude would require several years of old school play and a stack of character sheets.
All in all this film has several things to recommend it but for me it's fun little Saturday afternoon rental or matinee at best.