Here's Part one of this short series HERE. 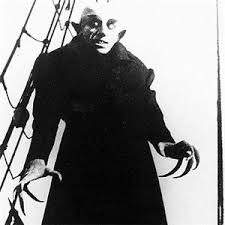 Major spoilers ahead Plot according to Amazon  : A chilly draft from doomsday... The vile plague of Baron Orlock, The Nosferatu, stretches across history from Dark Ages Europe to modern day Manhattan in this compelling prelude and sequel to the legendary F.W. Murnau film, Nosferatu, A Symphony of Horrors. No vampiric figure is more iconic or terrifyingly memorable than Nosferatu...a cadaverous monster with a calculating glint of utter evil in his hellish eyes who feasts not just on human blood but human souls. This classic of undead horror is reimagined by best-selling SF author, Mark (James Axler) Ellis, Rik (Captain America) Levins, Melissa (The Everything Ghost Hunting Book) Martin-Ellis, Richard (New Warriors) Pace and Frank (Nightstalkers) Turner

The night has teeth and they are long and deep. Count Orlok and I have a very storied history when it comes to gaming.  The comic series ends in a conflagration in which both Orlock and Longsword are killed but the curse of the Nosferatu is passed onto an innocent, as it was to Longsword ten centuries before. The series was notable for presenting a vampire character drawn from European folklore rather than the refined Anne Rice model that was in vogue at the time.
And this is where I picked up the series as a tool box for my own campaign. The cycle of the plague of vampirism begins its descent upon New York city during the height of the summer of '87 in the abandoned cathedral in contemporary Brooklyn.
A cult arises around the new Messiah of Vampirism and the rats begin to swarm. The PC's are employed as hunters and things start to go down hill from there. The illusion begins to tear around certain neighborhoods as the plague continues. Thousands die and the hunt is on.
The game that suited all this madness? Kult of course.

The players tracked down the new messiah and well. That's a story for another time.

The plot of the comic book limited series is epic in scope and quick for players to grasp but there are very few people who have actually bothered to watch the original silent film and grasp some of the concepts that lurk in the background.


The other connection from the silent film and this series is the  fictional city of Wisborg,Germany.There is a megadungeon that is still in Germany . At the end of both the comic book series and the movie several locations of Orlok remain.What happens to those?  In a Vampire the Masquerade game the locations were explored by a mix group of PC's. PC's who explored the locations trying to determine the cause of the plagues which always followed in the wake of Orlok's appearances.

The locations were also used in a Dark Ages Vampire game and the machinations of the Count as well as the appearance of Longsword.
Orlok also appeared in several CoC Delta Green adventures in India and Vietnam. Orlok's influence echoed throughout time in those locations.
The comic book series opens this link up further with various lairs, hideaways, and weird locations.

The Evil of Orlok
"Orlock isn't simply some random horror monster. He's a disease vector moving across the face of Europe who must be stopped at all cost. His very presence seems to warp reality around him."  The vampire is an unholy thing that should not be and the very fact that his bite not only corrupts anything it touches. It links the victim with the predator and his disease telepathically for all time. Exploit this fact as a DM relentlessly and use it to draw the players into the clutches of the vampire and his progeny. This is a vampire that makes other vampires dread and filled with horror. A reminder of a darker time in our human history when prehuman nightmares stalk the night.
There is no mistaking the claw marks that Orlok leaves throughout his comings and going of history.

Nosferatu: Plague of Terror is one possible origin point for this thing that travels through history leaving his mark across time,death, and victims.
Where does the evil of Orlok end? Well I personally think that it never actually ends only infects and cycles through history like an untreated boil and pox upon the unfortunate and unlucky.


The Nosferatu In Your Old School game

It seems that the evil of Orlok runs in cycles and immortality is a curse rather then the blessing as its portrayed in movies, literature, and the dreams of me.
Orlok is just the sort of the horror that would fit right into a game like Lamentations of The Flame Princess. Plague, rat swarms, corruption of the soul, and much more. Orlok is not so much a sexually transmitted disease as he is a complete rape of the human soul. Just the type of Gothic corruption the game needs.

Larythn Lord is a perfect breeding ground to test the mettle of players advanced and basic where the race to banish the vampire is perfectly suited for that kind of game. The real fun comes in when throwing in the Advanced Companion. Where players can go toe to toe with the nastiness.
Swords and Wizardry has some of the customizable elements that allow a DM to really exploit the system to create the atmosphere of Nosferatu: Plague of Terror and the movie in dark and deep locations.
Mutant Future doesn't seem like type of game that could sustain an adventure like Nosferatu. Because of the elements of the plague of vampirism begins its descent upon New York city during the height of the summer of '87 in the abandoned cathedral in contemporary Brooklyn. The monsters reach could extend past a holocaust into a world of mutants and vampires. Where the players meet a new Long sword type of character.

Its on sale right over here at Amazon HERE
Posted by Needles at 8:46 PM