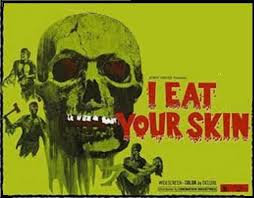 My favorite Bug eyed Zombie Cheap Schlock flick!
I used to slip this one in the VCR when things got slow at the video store and watch the crowd gather. The usual response was "WTF is this movie?"
Its one of my old standbys folks! 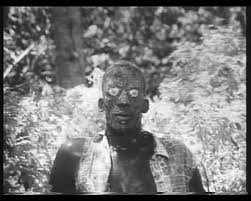 Here's another film that I've used at conventions and local old school horror games for adventures. Chill,Kult,WoD,and many others. This isn't a mere trashtasic film no this is a trashtastic classic! Harris, a playboy author of adventure books that read more like trashy romance novels, is invited to accompany his agent to Voodoo Island in the Caribbean-it would make a great setting for his next novel, he is told.
So he takes the most rickey prop plane in the universe down to Voodoo Island.  There he is attacked by our first zombie . Then he puts the moves on the local scientist's daughter. 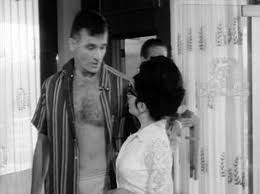 Seems the local "Voodoo" cult   Necromancy cult has been messing around with the scientist's latest cancer drug. Here's the actual plot according to wiki:

William Joyce. An author en route to the mysterious Voodoo Island crashes on a desolate beach, but soon discovers he's not alone-the island is filled with bikini-wearing zombies, a mad witch doctor and radioactive snake venom !
It gets better from there.  The local cult leader has been using the bug eyed zombies to  murder anyone who gets in his way.  Be warned this is a terrible tiki torch dime store movie with all the charm that it entails!
Here's a trailer for the movie. If your into this sort of Grind House movie then watch the full movie.

This is without a doubt, my favorite bug-eyed zombie movie!
There isn't any skin eating in this movie at all.
The Full Movie

Using I Eat Your Skin For Your Old School Horror

Alright right off the bat here I'll admit that I used this entire movie as a gate way drug for numerous campaigns. There's just too much to mine in this one. Alright lets start at the top. Del Tenney was either a mad man or genius depending on how you look at it.   William Joyce, the hero of the film is a tough, macho, sex maniac, and later becomes the head of a pulp publishing company which churns out endless Men's adventure novels in my campaigns.

Voodoo Island has been the start of a local zombie plague out break in the Chill rpg. The last remains of a cult of Stygian necromancers in Marvel Super Heroes. The beginning point for another zombie outbreak in Kult where the process of death is breaking down and the hiding place for a Death Lord.


In Dark Conspiracy,  Voodoo Island is the starting point for an investigation into the trepidation of a local Dark Lord.
The scientist and his radioactive snake venom have been the source of numerous zombie plagues across the world. Darkest Key West has provided the origin point for super heroes, mutants, and other PC's throughout Connecticut!


Voodoo Island has also shown up in every retroclone around. Its origin hasn't changed one bit accept that the alchemist is seeking a cure for the black plague. The witch doctor and company stays the same.

Armor Class: 8(11),7(12)with trash can shield
Hit Dice: 2
Attacks: Weapon, Strike(1d6), or Infectious Bite (1d3)
Special: Immune To Sleep and Charm, Carriers Of Zombie plague
Move: 7
HDE/XP: 3/30
The creation of an unholy combination of mad science and sorcery these zombies are quick moving and carriers of the dread zombie plague. Those bitten must save vs death or slip to the tragic plague like zombie undeath state.
A necromancer of greater then 2nd level may take command of these vile things and give them simple commands.They may be turned like any other undead.
They still remember their dim humanity and may use simple weapons and some tools. These unholy undead things will feast on the living as the various stages of zombification begin to affect their minds and organs. They are immune to all mind effecting magic except the blackest of necromancy.
After the atomic wars these monsters have been seen roaming the ruins of South America and Florida as well as parts of mexico. Like any other zombie a head shot will kill these monsters.

Voodoo Island is one of those mythical locations that crops up from time to time in super market tabloid news  papers and upon the scream sheet apps. The place has a vile history among the natives of Key West and refugees from Cuba.
The history of the place goes back to the time of slaves when weird rites were reported by Missionaries to the island. They reported a vile strain of Voodoo unrecognizable among any other African or Congo peoples. This is because the cult upon the island is one of the last bastions on Earth of the hated Stygian Witchcraft. This once healthy and very dangerous cult has cropped up no where else in the entire world.
The arrival of the snake venom research during the 60's and the mutation of the drug research allowed the return of horrid necomantic rites long thought of extinct. It is said that there is an actual supernatural agency at work upon the island. This however has been dismissed by many.
The island itself is said to be haunted and there are reports of the place seemly to vanish off of the displays of radar and surveillance  images.  There have been numerous disappearances of boats, planes, and other craft within the vicinity of the island.  Magnetic disturbances abound with a five mile radius of the place.
The Island has been seen as an even more dangerous in many time lines and alternative worlds where the zombie plague has run a muck. Mutated animals, hordes of zombies, and the occasional mutated giant spider have been encountered.
A visit to Voodoo Island should only be done by the most intrepid of adventurers armed with the most heavy fire power allowed by modern law.