Sunday evening had me jumping through hoops to go over to Larry's house to get the next part of the game revised. The public domain cult movie that I was going to use was no long public domain and I'm not about to rip anyone off. I had this whole alternative Earth  bit worked out and I was really excited about using it but couldn't ?!
Fortunately my own blog came to my aid. 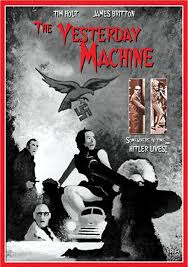 I wrote about the "Yesterday Machine"  back in July of last year. You can find that HERE. The characters got the nomads back to the underground base of a group of renegade Glanauaethanians somewhere in the South western United States. The NPCs were taken in by the vault and given shelter. The skills of the nomads were needed for the vault.

Meanwhile the PC's were hired to conduct a daring dungeon raid on a Nazi underground abandon base in the middle of Paris. Now a hell hole infested with zombie troopers. The PC's were to recover two "Great Race Time Engines".

This is how the game worlds stand at the moment.
Much of the realms are now my own creation drawn through the filter of public domain grind house movies

Into the Ruins Of Paris
The PC's were teleported into the ruins of Paris and immediately went to  work.They were able to get into the facility rather easily. They recovered several weapons, a bit of gold, and then got dumped into a pit trap full of rot grubs. Four PC's bit the dust. Terry's 6th level wizard and zombie bodyguard, Jason's 5th level cleric, and Ronny's 6th level Artificer/ Fighter.
The PC's were able to recover the two Great Race Time Engines from the Nazi R&D lab. They defeated the Nazi necromancer/zombie master. Their own had been killed though and their way back to the USA and their employers was gone!
Then in the same lab one of the Great Race time gate engines activates. The PC's are armed with machine guns and are ready for anything when a small non nondescript man enters.  A stranger in a monk's garb greets the PC's by name. He  was a "White Wanderer" a member of a class of psionic/wizards who wandered the wastes of infra-dimensional space.
He explained that he was sent to pick the PC's for the recovery of the "Great Race Time Engines". The PC's were to accompany him back to  vault 42. He had a Plane Segrator near by in infra dimensional space. He had to take the PC's back to the vault and had another mission for them. He also had replacements waiting for the PC's fallen brethren and there would be compensation.

Once back in the vault the White Wanderer went into details about his quest.
The White Wanderer explained to the PC's "In 1944 Dr. Von Hauser got his hands on a Yithian time engine. These experimental devices allowed one to jump through the time lines & their alternatives. The technology had wide reaching implications & the good doctor had little restraint in the matter.
Each of the yesterday machines not only created doorways into time but also into alternative time branches. The Dr.Von Hauser who was killed at the end of the Yesterday Machine might be only one version of the madman! There might be multiple versions of this dangerous psychopath rampaging through the time streams. There was reason to believe that a Dr.Von Hauser was hooking up with Nazi's within the Nazi After Waste prime line(a post apocalyptic nightmare created by the Nazi's that had spread to the party's world).  While another version of the madman had made contact with sympathetic Greys within the Bremuda Triangle's multi dimensional island. The Plane Segrator didn't have the power to reach the island. But with a batch of fuel and the installation of the extra Great Race Time Engine it shouldn't be a problem. The Player Characters Party

Back at Vault Forty Two

Back to the to the Vault

The PC's dropped the "Time Engine" off and then four new recruits were thawed from the suspended animation vaults of the Glanauaethan
. 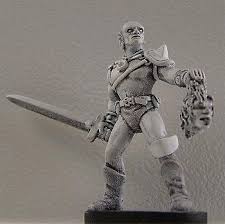 The PC's watched as the "Great Race Time Engine"   was installed on the plane segrator and within moments they were floating between the infra dimensional spaces. The segrator didn't have the juice to reach the triangle's island nexus. So a short side quest was needed.
The Derelict

Sailing the seas of forever is a craft that is part planar ship and part sailing vessel of alternate worlds. This vessel sails between the planes forever more. The craft has on board a cargo hold full of treasures from a million worlds left behind by castaways and those lost to the dimensional tides. She is crewed by no man or alien life form but millions have set foot upon her decks.
Among her cargoes was a load of plutonium that the PCs needed.
The plane segrator set down on the Seas of Forever and the PC's made their way on board. They were attacked by a dimensional shambler! The PC's all of them attacked the thing and drove it off after a heated battle.
Within the cargo hold a several of the PC's almost got nailed by infra dimensional parasites! They recovered the cargo and left the ship!
More Next Week!

Much of the material on this was made up and some of the source material came from the best damn book about multiversal locations that never gets mentioned!
Maps Places of Legend has been my go to source from Flying Buffalo for years!

Steve Crompton's illustrations and the text are spot on!
MAPS 2: Places of Legend. Provides maps, details, and adventure ideas for such legendary places as Camelot, Atlantis, King Soloman’s Mine, Capt. Nemo’s submarine base, Lemuria, the 13th Floor, Bermuda Triangle, OZ, and others. More art, adventure ideas for every place & crossover scenarios included. 96 pages. $11.95
Another source for stuff was the LEJENTIA CAMPAIGNS BOOKs

Especially this one which will be used for some of the action coming up.

The Deodanth came from the mind of Dave Hargrave and Bloody Arduin's influence once again found its way to my table tonight. Big thanks to Emperor's Choice games for this book again which saved my rear.

You can find their fine products right over HERE

Finally to run this whole game tonight came the back system which has gone from straight swords and wizardry to the more bold old Lovecraftian Marvelous Barbarian feel of Crypts and Things!

This wonderful backbone of my gaming table can be found right over HERE .