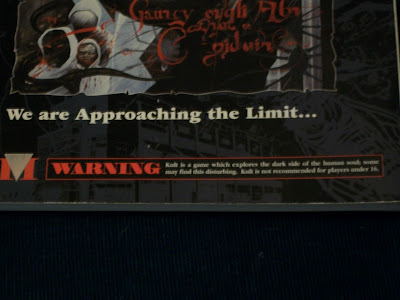 WARNING !ALL OF THE FOLLOWING DOWNLOADS CONTAIN MATURE CONTENT!  YOU'VE BEEN WARNED.

Introduction
The Last Cycle has been & continues to be one of the unsung heroes of the table top horror  role playing movement. While the world continues to go about its business. This group of dedicated role players continues to spread the word about the Kult rpg. They're a friendly little group of like minded folks who preserve & produce some of the best rpg material out there.
Here are six of my top picks that I've used. Ones that I come back to over & over at the table.
The Master Gaia Sourcebook

Intro from The Last Cycle :
In Gaia, Nature turns out to be just as pessimistic, and eat-or-be-eaten is the rule. Identity is lost; time has no meaning; and gates open up to it in places far from the city, places where veteran Kult players expect to be safe (just _let_ them move to the country!). The converse to urban horror -- gangs and brutality, mechanical monsters and the indifference of strangers -- is pastoral horror -- degenerate backwoods people and brutality, animal terrors and the isolation of being miles from where anyone can hear you scream. What could be a better change of pace?
This is one of the more brutal produced fan source books. Very well written, easily adaptable, & very dense with ideas. A bit out of date but its free & nice.  Jason Thompson did an excellent job with this sourcebook.  Highly recommended! You can down load it right over Here

The Maps Of Hell
Learn about the torture that our torturers, the nepharites, must endure, and the Labed Vov, the guardians of the gates between Illusion and Inferno. And, find out what happened to paradise, the home of the angels, after the departure of the Demiurge.
Matthew Boroson & Jason Just did an excellent job with this as well. The content is mature. The overview very complete. Very well done.
Download that right over Here

Heaven
"This description of Heaven is based on the ideas of the original KULT rules and the Legions of Darkness sourcebook. The cosmology described in the Metropolis sourcebook doesn't appeal to me. I think that almost everything in Kult shows that the Demiurge never was particularly benevolent to mankind. Just look at the servants he created. Based on this, I have made a Heaven which was once very pleasant but still made for some dark purpose. Now the Demiurge has disappeared, and his Heaven is coming apart at the seams."written by Bas Suverkropp
This is a very weird view of  Heaven in the Kult universe. Easily a very interesting take on the subject. Take a look. I've used this one recently and its still pretty bizarre & interesting. Download it right over Here

Liber Chao describes a magical lore which doesn't belong to the Realm of Enlightenment, neither to the Realm of Trascendence: chaos magic is meta-magic, as it deals with the symbolic system and the perceptual structures by which the conjurer is attached to the Illusion
Written by Pablo Barron (kadari)
A new school of magic for your games. Very well written nicely done & easily insertable into your modern horror or old school rpg.
Grab it right over Here

The Daedali
A nasty kult monster that I've used a few times. Well written by Underspawn - Christof Warren  You can down load that right over Here

The Jail Of Night

This isn't simply a World of Darkness/Kult crossover. Its actually its own stand alone world setting. The whole thing was put together by the efforts of some great people. Here's what you get.
The Jail of Night was first published split up in several parts in the White Wolf: Inphobia magazines - with great success. This download however, also includes the fifth and final part which never saw print. All rolled up into one, this is the most complete Kult / World Of Darkness Crossover.


Dense with cosmological conversions and creature conversions. The Jail of Nightalso contains information on magic lores, spells, vampire clans and much more.
The setting is very well done & you really should dive right into it
Download that right over Here


PCs are stranded on an island... in the Bermuda Triangle with a Forgotten God and his traitorous Man-Servant... whom themselves are trapped in the Illusion.

They find many dangers and a strange mansion created from the Gods delusions among other wonders and oddities youcan base a few adventures around including intrusions from Gaia.


This is mostly an extended Outline adventure... and a home-made map. Enjoy!

Using Sourcebooks & Adventures In Your  OSR Horror Games
All of this material is mostly stat free & easily adapted to any number of horror oriented games. The source books are laid out in a very easily convertible manner. I used them for Call of Cthulhu, Chill, & even World Of Darkness.
The material can also be imported over to any retroclone where the powers of Kult have sway. The potential for horror is apparent at every turn.
Carcosa & its environs scream for some of the monsters, and adventures found within. The Mysterious Island adventure could be used with Mutant Future or even as a Labyrinth Lord adventure situation. There will have to be some modification of course but that comes with the turf.
The only books you really need for the game are the main rule book & Legions of  Darkness.
The cosmology of Kult screams for heroes & the setting says no but  really the players are likely to say yes. This is a game with far reaching cosmology issues. The setting is far better then the system & the addition of a retroclone just makes the setting a bit faster & play easier.
On a personal note I haven't picked the best of the source material on the Last Cycle. Only the books that I've personally used in the past.
Artifacts, weird tech, forgotten gods its all waiting for a new DM to pick them up and run with them.
Many thanks to the folks over at the Last Cycle For More Information on Kult & its many incarnations go right over Here
Posted by Needles at 11:20 AM