Island of Terror (1966) For Your Old School Horror Campaigns

Plot Outline According to Wiki :
On the remote Petrie's Island, farmer Ian Bellows goes missing and his wife contacts the local constabulary. Constable John Harris goes looking for him and finds him dead in a cave without a single bone in his body. Horrified, Harris swiftly fetches the town physician Dr. Reginald Landers, but Dr. Landers is unable to determine what happened to the dead man's skeleton. Landers journeys to the mainland to seek the help of a noted pathologist, Dr. Brian Stanley in London.
Like Landers, Stanley is unable to even hypothesize what could have happened to Ian Bellows, so both men seek out Dr. David West, an expert on bones and bone diseases. Although Stanley and Landers interrupt West's dinner date with the wealthy jetsetter Toni Merrill, West is intrigued by the problem and so agrees to accompany the two doctors back to Petrie's Island to examine the corpse. In order for them to reach the island that much faster, Toni offers the use of her father's private helicopter in exchange for the three men allowing her to come along on the adventure.
Once back at Petrie's Island, Toni's father's helicopter is forced to return to the mainland so he can use it, leaving the foursome effectively stranded on Petrie until the helicopter can return. West and Stanley learn that a group of oncology researchers led by Dr. Lawrence Phillips, seeking a cure for cancer, have a secluded castle laboratory on the island. Paying a visit to Phillips' lab however reveals that he and his colleagues are just as dead (and boneless) as Ian Bellows. Reasoning that whatever it is must have begun in that lab, West, Stanley and Landers gather up Phillips' notes and take them to study them. From them they learn than in his quest to cure cancer, Phillips may have accidentally created a new lifeform from the silicon atom.
Thinking the doctors are at the castle, Constable Harris bikes up there looking for them to tell them about the discovery of a dead, boneless horse, only to wander into the laboratory's "test animals" room and be attacked and killed by an offscreen tentacled creature, the result of Dr. Phillips' experiments. The creatures are eventually dubbed "silicates" by West and Stanley, and kill their victims by injecting a bone-dissolving enzyme into their bodies. The silicates are also incredibly difficult to kill, as Landers learns when he tries and fails to kill one at the castle with an axe when they first encounter them.
After learning all they can from the late Dr. Phillips' notes, West and Stanley recruit the islanders, led by "boss" Roger Campbell and store owner Peter Argyle (who seems to serve as Campbell's second-in-command in an unofficial capacity), to attack the silicates with anything they've got: bullets, petrol bombs, and dynamite all fail to even harm the silicates. But when one is found dead, apparently having ingested a rare isotope called Strontium-90 from Phillips' lab (via Phillips' accidentally irradiated Great Dane), West and Stanley realize they must find more of the isotope at the castle and figure out how to contaminate the remaining silicates with it before it is too late. They obtain enough isotope to contaminate a herd of cattle - at the cost of Stanley's right hand, when he's grabbed by a silicate - and the silicates feed on these and begin to die.
The story ends with evacuation and medical teams inbound from the mainland and West commenting on how fortunate they were that this outbreak was confined to an island. Had it happened on the mainland, he notes, they might never have stopped them in time. This sets up an epilogue and a visit to the satellite program, in Japan, where the techs are duplicating Phillips' work - with the inevitable result. A technician walks down a corridor, hears a strange noise and investigates before screaming.
The Silicates

Created by the Ancients as a to cure cancer, they may have accidentally created a new lifeform from the silicon atom.
The creatures are eventually dubbed "silicates"  and kill their victims by injecting a bone-dissolving enzyme into their bodies. The silicates are also incredibly difficult to kill. They adapt to almost anything thrown at them.

Should a victim be grabbed by a tentacle from the beast a save vs poison must be made. Failure results in the victims bones dissolving from within.  The monsters are incredible tough to kill.

Only rare isotopes from the wasteland will kill the beasts.  Rare isotopes such as  Strontium-90 and the like are likely to destroy the beasts from within. 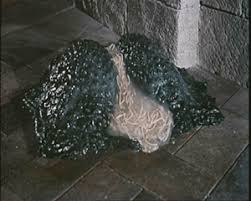 The beasts are able to project their tentacle/sensor feeding tubes over 40 yards snaking through vents, windows and other obstacles with easy. They then feed on the bones, marrow, and other tissues of the victims bodies. 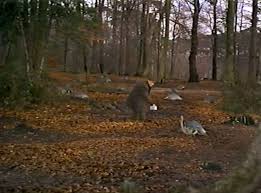 The monsters are accompanied by eerie whining whistling when hunting. They may be hunted by those who know the tell tale signs and signals of these death dealing engines of hunger.

Should a victim be strangled for more then 1d4 rounds, the victim must make a save vs death or be completely dissolved and boneless. 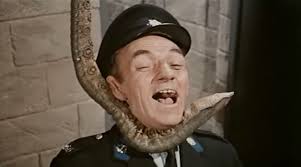 The monsters are mostly immune to most physical damage. Magical and psychic energies may effect them only 70% of the time.