The PC's dealt with the mysterious air ship hovering over them and playing odd coloured lights about them. They were very nervous to say the least and so was the crowd of the city state that they've been adventuring in.
The lights snapped off and the craft moved silently, ominously away from the city sky line.
The PC's dealt with weird assassins, odd giant spiders preying on random passers by from above an alley and robbery.
The PC's have been investigating the disappearance of a merchant prince within a far flung corner of a Gothic Pulp world.

After several leads, dead ends, and near run ins with some rather dubious characters the PC's finally managed to track down a weird cleric operating out of some back alley theater. Through a beggar the PC'sd were able to find his domicile.
They did so through the sewers of the city. A rat infested horrorscape of weirdness with all sorts of black nightmare inducing crud was waiting. Noting attacked them but it was quite a bit of fun to see em squirm.

With this 'beggar''s help they managed to break into this man's apartment which was more like a converted North African funeral temple. There were the usual bubbling apparatus  the bedroom had been converted into a fully functioning funeral alter area complete with a level drained merchant prince close to death.

There was also the small matter of the magic mirror that housed a animal headed guardian spirit and the 'other where' dimensional reflection of the place.
They were able to talk their way into the reflection and found a journal detailing this visitor from

Levanti, the capitol city on the River Nilus.

The 'otherwhere' temple/apartment was covered with strange glyph works of  Hundred Death Gods. 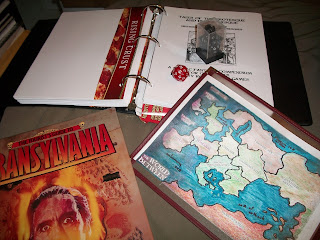 It seems that this visitor has been passing himself off as a performing priest when in actuality he's a mage of the darkest stripe whose getting ready to bring about the final movement in a diabolical performance to a charmed audience in hundreds.
Can the PC's stop the rite to the 'Hundred Death Gods' in time? (Of course they can't!) But what is he up to and what does this have to do with the level drained merchant prince whose wife now wants nothing to do with him?
Tune in this coming week for more!

“For it is in the arcana of dreams that existences merge and renew themselves, change and yet keep the same.” ― Bram Stoker, The Jewel of Seven Stars
Posted by Needles at 5:11 PM