The Ghoul 1933 For Your Old School Horror Campaign

I have a fondness for ghouls. Not the ad&d ones but the ones that appeared in HP Lovecraft's stories. Ever since I was a little kid there have always been certain movies that evoke a timeless spirit of horror and depravity. This is one of those but its also one that you can exploit for use as a gate way adventure. 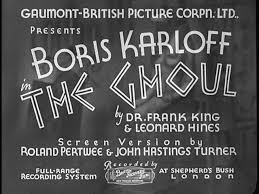 The plot according to Wiki :
Gaumont British borrowed just the vaguest outline from the 1928 source novel by Frank King (and subsequent play by King and Leonard J. Hines). King's novel is sub-par Edgar Wallace in which a master criminal popularly referred to as 'The Ghoul' has been responsible for a London crime wave. Betty inherits an estate on the Yorkshire moorsfrom a mysterious benefactor, Edward Morlant, a dabbler in mysticism who years before had been her mother's paramour. But the will requires Betty to take up residence in the old house, where Morlant's corpse soon appears, walking and talking. Morlant tells her that he is an immortal adept and demands the return of his secret diary. The usual suspects and interlopers converge on the house, and upon Morlant's next appearance his resurrected self is killed anew, unquestionably stabbed through the heart. Morlant is soon perambulating again, as people begin turning up dead. All supernatural trappings are dispelled as 'The Ghoul' is penultimately unmasked as Edward Morlant's twin brother, James, a criminal mastermind whose fictive guises included not only his brother, but a bogus police sergeant and his brother's solicitor, Broughton. In a final act of madness, James torches the mansion.
The film screenplay uses the merest skeleton of the story and characters and blends it with the Egyptian mysticism of The Mummy while capitalizing on the "thunderstorm mystery" mood of The Old Dark House (1932), Karloff's two previous Universal Pictures. Eccentric Egyptologist Professor Morlant believes that if he is buried with a jewel called "The Eternal Light", in a faux Egyptian tomb he has constructed at his English country estate, Anubis will manifest before him, accept his offering of the diamond, and grant him  eternal life. Morlant appears to die, but the jewel is snatched by his servant before the interment. No sooner do the heirs arrive for the reading of the will, than Morlant rises from his tomb, finds his bauble gone, and attempts to punish the thieves. The jewel is punted from servant to lawyer to niece to Egyptian fanatic to spinster to mock vicar and eventually back to the revenant Morlant, who makes his blood sacrifice to Anubis before properly expiring. Morlant, it is learned, had merely suffered a cataleptic seizure, and had been buried alive. The mock vicar (Ralph Richardson) is revealed to be the chief villain, and having obtained the Eternal Light sets fire to Morlant's tomb. Betty and her lover manage to escape.

There are several different elements that can be lifted for a number of classic old school horror games here. The Ghoul is classic "This dark house in the country side" fare. This makes it perfect for using as a game set up.
Heart and soul of the movie is Boris Karloff's Prof. Morlant and the jewel The Eternal Light. Morlant is the perfect Call of Cthulhu villain or foil. He'd be a undead servant of Anubis in such an adventure and not merely having suffered from a seizure.  Then there's the matter of the Jewel of Eternal Light. The Jewel would be an artifact in the AD&D setting dedicated to the god Anubis. Eccentric Egyptologist Professor Morlant believes that if he is buried with a jewel called "The Eternal Light", in a faux Egyptian tomb he has constructed at his English country estate, Anubis will manifest before him, accept his offering of the diamond, and grant him eternal life. The jewel gets passed around from hand to hand and its strange powers are never really revealed.  So its the sky is the limit as far as the Jewel is really concerned. Then there is the question of where Morlant actually came across such forbidden knowledge. Could there be a cult that the jewel originally belonged to? Are they still out there with other such treasures waiting for the day when their god walks the Earth once again?
Could this movie be used as a plot device in a game of modern horror such as Kult or Dark Conspiracy? It certainly could. The faux tomb on Morlant's property might be restored in the modern era as part of a folly by a local "gnome" or the blood descendant of the professor. This could set in motion events that allow the Eternal Light to once again summon Anubis to walk the Earth and seek to strike a bargain with another supplicant.
For a game like Kult this version of Anubis is a forgotten god whose cult died out but his bauble ties him to the Earth. He moves through the illusion only a flicker of what he once was. A dangerous flicker but one that could burst into a flame if the machinations of a cult fan the flame.
Finally there's the odd ball cast of drawing room characters that just cry out to be made into NPCs for any number of current or future games. The Ghoul is one of those rare films that is just an undiscovered classic waiting for a new generation to rediscover it. 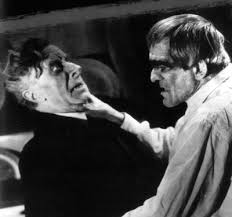 The Blessed of Anubis
The blessed of Anubis are those who have received the immortality promised by the Jewel of Eternal light. They are still intelligent, and function in day to day society but they have all of the usual limitations of an undead state. These beasts have a 30% magic resistance and a dire connection to the negative material plane. They also have a psychopathic hunger for murder most foul. The Blessed are created from the dark shadow of Anubis and often serve as the heads of certain blood thirsty cults dedicated to this dark aspect of the Egyptian god.
Posted by Needles at 9:43 PM