Way, way, back in the nineties this classic came out and it now one of the classics of anime. This was a joint venture from France and became an afternoon staple on Nickelodeon from 1990.
This makes a great resource for a sword and sorcery campaign much of the artifact and technology was interesting as well as very original. I hate to say this but I used this material for a OD&D Hallow World campaign.  Much of what follows is from the Wiki entry on the series.

"Ever since the time of the Great Cataclysm, the Arkadians have lived deep in the center of the Earth. They believed they were the only survivors of this great devastation. Their civilization thrived under the power of their sun, the Tehra...until it began to fail. In desperation, the children of Arkadia broke the law and entered the forbidden Archives, searching for a solution. What they discovered gave them hope. Anxiously, they used their special powers and created a messenger to the people above. They named her Arkana...' 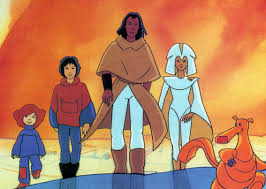 The lost city of Arkadia (named for Arcadia) resembles a small Alderson Disk, and is home to an ancient civilization which escaped a Great Cataclysm by relocating deep within the Earth's crust. Unaware that life continued on the Earth's surface, and hoping to keep their people safe, the elders sealed all records of their past in the city's Archives.
Arkadia survives by the light of an artificial sun, the Tehra (Shagma), which is dying. A group of Arkadian children defy the law and enter the Archives. With information about the world above, they create a messenger, Arkana, and send her above to find help.
Arkana encounters two children from the surface, Matt and his sister Rebecca, and brings them back through the underground strata to save Arkadia. They travel in a living turtle type spaceship called Tehrig, along with Spartakus (a mysterious wanderer) and Bic and Bac (a pair of pangolin-like creatures), Arkadia's mascots. 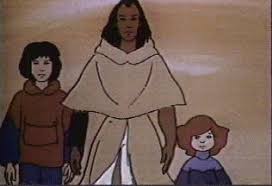 Arkana: The Arkadian children created her out of stone with the help of the Tehra's rainbow light, as an avatar of the Arkadians. As she was made in the image of the surface dwellers, having legs, unlike the Arkadians themselves. She is a well-meaning but naïve magician, capable of telekinetic feats and projecting illusions. Her mission is to seek help from above in repairing the Tehra. She is referred to by the show's villains as the "supergeophysical gal."
Bic and Bac: Among the oldest living things in Arkadia, these two happy little animals are the best of friends, and enjoy dancing to their song, the "Flashbick." They are a kind of pangolin anteater, but unlike their real-life relatives, they have no scales or claws. They are affectionate, clever and playful, and can make fire by rubbing their noses together.

Matthew "Matt" (Bob) and Rebecca: Brother and sister, these children from above ground join Arkana and Spartakus on their quest to save Arkadia. Matt is the older of the two, and tries to protect his overeager sister, whom he affectionately calls "half-pint."
Spartakus: Formerly a gladiator in the city of Barkar, this young man escaped slavery following a revolt. His gauntlet conceals a magic crossbow and grappling hook, and can cause reactions when in close proximity to Arkadian artifacts. He remembers very little about his past, but often hums the songs his father taught him. His character is based on the historical Spartacus.
Tehrig (ShagShag): The only creature allowed free access to the Archives was Tehrig, an intelligent robotic vehicle vaguely shaped like a giant trilobite a.k.a. a turtle. It secretly helped the children of Arkadia gain entry to the records and serves Arkana and her friends as a transport. Though its computer brain dates back to before the Great Cataclysm and possesses an encyclopedic database, there are large holes in its memory. It also contains a number of tiny robots called Triggies (Shaggies) that it can mobilize to distract enemies or repair itself. 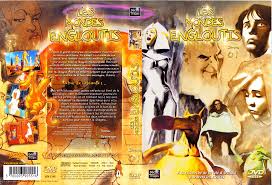 The Pirates of the Seas: Members of the Interstrata Marine Pirate Federation, these "punk pirates" roam the strata seeking helpless voyagers to rob or enslave, and they frequently show up to menace the show's heroes. Their appearance is marked by a recurring theme song and dance performance. Their society is structured in the guise of a democracy controlled through mass media. 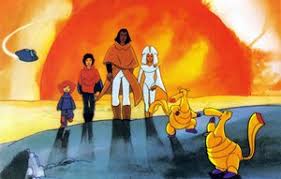 Brigands of the Fjords: The Pirates of the Seas' rivals throughout the series. The only identified member is their leader, Ringmar, who frequently competes with Nasty Max for leadership of the nested worlds' rogues.
Shagmir and Loria: Are the two of Arkadia's elders. Arkana was presented to them and sent on her quest to the surface world. They tended to not believe the existence of any life on the surface.
The Inquisitors of the Living Crystal: This three-person tribunal of blue-skinned judges is first seen in the second episode of the first season, "Le cristal vivant" ("The Living Crystal"). They try to make Galileo renounce his claims of a world beyond the Living Crystal. They have the group captured and psychologically tested to convince them that they are beings who were caught in the Living Crystal and are suffering "a deformation of time". They are even prepared to re-crystallize Tehrig if Galileo does not renounce his beliefs. They are seen again in the second episode of the second season, "L'échiquier des mondes" ("The Most Dangerous Game").
Arkshag: Spartakus' nemesis and guardian of the Prisoners of the Lost Time. 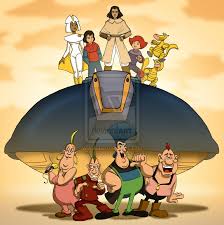 Emperor Qin: The ruler of a Chinese-like empire within the strata. He marched out to conquer Arkadia. He was eventually killed amongst his army of clay robot-like warriors.
Galileo: A strata version of the real-world Galileo; he lives in the Living Crystal. When he discovers the group imprisoned in a crystallized Tehrig, he breaks them free. Their existence proves the prohibited theory that there is life outside of the living crystal. After being forced to deny the truth, he was allowed to leave with the group, but at the last moment returned home.
Gog and Magog: two monstrous creatures sharing the same body. They are unintentionally released to rage havoc by Arkana, who is misled by the Phoenix into using her powers. In the end they are both forced back to their own world.
Demosthenes: A famous spokesman, kidnapped by Nasty Max in order to help him learn the art of speaking and thus win election as leader of the Interstrata Pirate Federation. He was banished from his country because he did not have the walls repaired.
The Mogokhs: A nomadic warrior people who oppress and steal from others. They are notable for their invincibility. They never get down from their mounts for fear of being trampled to death.
Méo and Myra: A grandfather and his granddaughter who live in a village pillaged by the Mogokhs. They seek aid from the group, who help them overcome the Mogokhs.
Starkus: A scientist and Star Healer on board a space ship, he investigates and tries to "cure stars". He met with Rebecca and Matt and welcomed them. Upon hearing that they were accompanied by Spartakus and Arkana, he immediately disappears. Later, when the group returns to their own time and place (in the episode "Star Healer"), he contacts them via Tehrig and informs the surprised Arkana and Spartakus that they are his ancestors.
Thot: A strange creature that lives in the ancient ruins of a long-destroyed city. He kidnaps Arkana, but without intending to hurt her. He is shot by Spartakus when he tries to protect Arkana, but is only slightly wounded.
Rainbow: Spartakus's younger brother, he grew up in luxury as the adopted son of the Lanista (trainer of gladiators) of Barkar. Unlike his brother, Rainbow is cruel and nihilistic. After the Lanista was overthrown, Rainbow began to wander the nested worlds.
For a kids show this one had a ton of stuff going on and many of the themes were way, way, ahead of their time. From the creation of artifical life to the struggles of Spartakus. There was a lot going on here. Much of the material is easily adaptable. Arkana bares a striking resemblence to the goddess upon the Hallow World campaign box.

For a sword and sorcery campaign there is a ton to mine from this one. I could spend at least three blog entries on this classic.
Much of the material and ideas of  the series was layered in such a way as to reveal one minor thing after another to lead the PC's on. The ruins, technology, and setting kept building on itself whist dealing with the struggles of the characters themselves. I was always partial to the fact that the minor artifacts never over shadowed the characters.
Posted by Needles at 11:21 AM