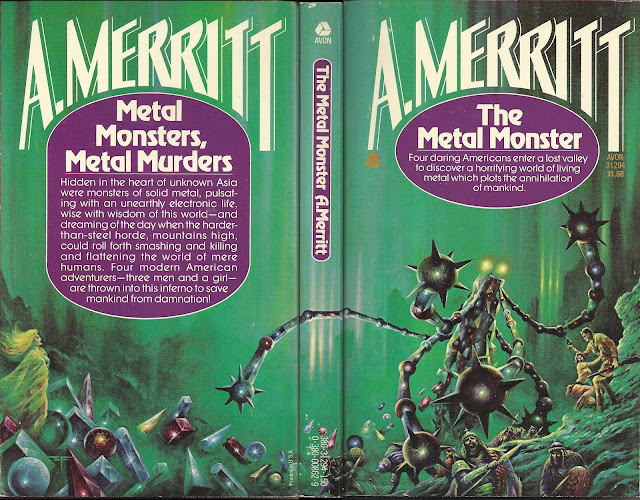 
This is one of my all time favorite A.Merritt tales, we have the return of Dr.Goodwin from the Moon pool, a ton of weird technology and a really solid tale of pulptastic goodness!
The fact is that this wonderful novella has a ton of possibilities. 
The Metal Monster is an Abraham Merritt fantasy novel. It was first serialized in Argosy All-Story Weekly in 1920 and features the return of Dr. Goodwin who first appeared in The Moon Pool.The epic adventure starts with a foreword where Merritt is assigned the duty to relay Dr. Walter T. Goodwin's incredible tale of his encounter in the Trans-Himalayan mountains to the world, to let everyone know the terrible fate Goodwin's group barely escaped and the possibility of other such monsters out there.
I know I'm not the only blogger whose covered this classic The Land of Nod covered it back in 2012 right over HERE
Dr. Goodwin is on a botanical expedition in the Himalayas. There he meets Dick Drake, the son of one of his old science acquaintances. They are witnesses of a strange aurora-like effect, but seemingly a deliberate one. As they go out to investigate, they meet Goodwin's old friends Martin and Ruth Ventnor, brother and sister scientists. The two are besieged by Persians as Darius III led when Alexander of Macedon conquered them more than two thousand years ago.
The group is saved by a magnificent woman they get to know as Norhala. She commands the power of lightning and controls strange metal animate Things, living, metallic, geometric forms; an entire city of sentient cubes, globes and tetrahedrons, capable of joining together and forming colossal shapes, and wielding death rays and other armaments of destruction.
They are led to a hidden valley occupied by what they name "The Metal Monster", a strange metal city occupied by the metal animate Things Norhala commands. This city is governed by what they call the Metal Emperor, assisted by the Keeper of the Cones.
Ruth is slowly being converted by Norhala to become like her; her little sister. Martin, her brother, tries shooting the Metal Emperor, who retaliates with a ray blast, putting Martin in a comatose state.
Closed in between the Metal Monster and the Persians, it falls to Goodwin and Drake to find a way to escape their predicament.
There are three versions of the story as well..
Three versions of the story exist.
The second version is named "The Metal Emperor", appearing in 1927 in Hugo Gernsback's Science and Invention magazine. It is an abridged version of the first story, with the leading character's name changed to Louis Thorton.
Using The Metal Monster For Your Old School Game
Alright I realize that this isn't a sword and sorcery novel but the fact is that its one of those books that really stays with you and gets under your skin. Whist I was reading this one being sick I couldn't help but think of the possibilities of adding the metallic entities of this novel to a game like Astonishing Swordsmen and Sorcerers of Hyperborea.
The living technology would be perfect for a party of adventurers to encounter. And the scientist priestess in the novel makes a perfect template for an NPC priestess ruling from some distant and forgotten corner of that world.
A word of advice though, read the Moon Pool before proceeding into the Metal Monster. Some of the situations and characters will make far more sense.
This is really how I pictured the lost technology and artifacts of Hyperborea. Weird, strange and incredibly dangerous.
I can also see this novel as a bridge gap between a modern campaign and a lost world adventure in which the metal monster entities are awoken. This might even be used for a Mutant Future game adventure as well.
I can see some of the smaller entities being sold in some little forgotten out of the way market only to spring to life and take out a region as their big brothers are called in!
All in all this is one of my favorite Merritt books. Its well written, tells a hell of a yarn, and gives a DM incredible fodder for their games
Posted by Needles at 10:44 AM