Back in the 90's I was playing a metric ton of CoC  and getting into the 20's and 30's era. The 1990's hand book from Chaosuim was alright for what it did. A few adventures, some updated stats, and what have you you.
Back when I was going to conventions and had money I ran into John Tynes and Pagan Publishing. They shoved Delta Green in my hands and my modern gaming has never been the same. Pagan are a bunch of intelligent  gamers who write the stuff gamers want. They do it damn well.
Delta Green is a legend among CoC gamers and there's a reason for it. I'm not going to rehash in loving tones why you need this book. Needless to say that Delta Green still remains one of my favor books for Call of Cthulhu.
You can get a pdf over Here and the original hard copies sell for stupid money.
Here's what I use Delta Green for even with other games. The artifacts, some of the modern groups, the reports on the various Mythos monsters, mining the adventures for all their worth, and the NPCs themselves are perfect. With the NPCs be sure to change the names to protect the guilty and insane. Delta Green Countdown has been out of print for many years and its still a viable resource for any CoC or modern game. There is a ton of stuff to use here. The world spanning conspiracies, the indepth history of the mythos in the modern world and its continuing impact. The NPCs, monsters, expansions of other mythos material, the guns, the gats, and the girls. This book takes it all and knocks it out of the park. Here's a look at some of the stuff:
"The Insects of Shaggai, alien parasites subverting the leadership of a nation; Pisces, the U.K.'s attempt to harness the unknown; The Army of the Third Eye, terrorists fighting a bloody battle against alien invaders; GRU SV-8, a band of desperate operatives fighting darkness in the ruins of Russia; The Skoptsi, occult fanatics with an eight-hundred-year legacy; The Outlook Group, where Majestic-12 tests its elite; Phenomen-X, a syndicated TV news show that pokes its camera in all the wrong places; Tiger Transit, a former CIA airline now in the clutches of a Tcho-Tcho drug cartel; The D Stacks a the American Museum of Natural History, where Dr. Jensen Wu classifies the unclassifiable; The Keepers of the Faith, traditionalist ghouls fighting the lean and hungry Heretic ghouls beneath the streets of Manhattan; and the Hastur Mythos, a twisted skein of surreal destruction weaving its way through humanity. "
The book sells for stupid collector's money. I've seen it going for 140.00 dollars but you can download it right over HERE

The Unspeakable Oath is perhaps the single best resource for CoC that was put out in the 90's and I'm happy to report its back! Arch Dream Publishing did a great job with the mag and its very well put together. There are ton of stuff to mine from this magazine if your willing to do so. Here's the link for #18 HERE 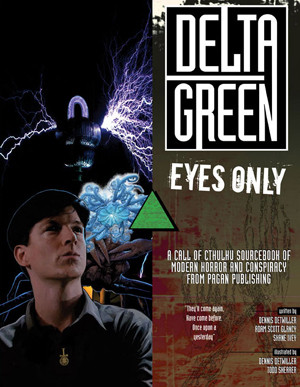 Eyes Only  is  God sent and a nightmare at the same time for a DM. The book is fantastic and really gets into the heart of the matter when it comes into the world spanning conspiracies that inhabit the Delta Green universe. The book covers a ton of the material introduced Delta Green and CoC. Yes this is another essential book. This book involves both the Mi Go and The Philadelphia Experiment.
This is some of the stuff I've mined from it:
Posted by Needles at 8:05 AM