The Horrors Of Spider Island For Your Old School Horror Campaign

This is one of those trashtastic films that simply screams great adventure.  We present the: 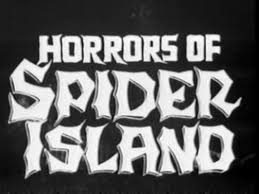 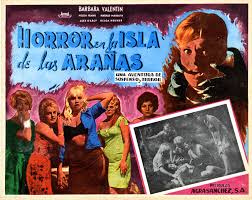 Horrors of Spider Island is one of those  public domain horror movies that is so very, very, bad that its good. It actually has a lot to mine if you don't mind getting your hands dirty.

A bit of background from wIki: Horrors of Spider Island (German: Ein Toter hing im Netz) is a 1960 West German horror film directed by Fritz Böttger.[1][2][3] The film stars Alexander D'Arcy as Gary the talent agent who invites several girls to a club in Singapore. Their plane ride ends abruptly when they crash-land into the ocean. D'Arcy and the girls make their way to an island where they find a larger spider-web-and. A giant spider sinks its teeth in D'Arcy which turns him into a werewolf   Werespider  actually.

The movie has a really weird plot actually. Again from Wiki:

Gary, a nightclub manager, flies a group of women from New York City to dance in his club in Singapore. While flying over the Pacific Ocean, their plane catches fire, splits in half, and plummets into the ocean; oddly enough, no-one in Gary's group is killed, while no one (pilot, stewardess, etc.) who was not in Gary's group survives. We next see the group days later, suffering from dehydration on a life raft, when they finally spot a small island and spend the night on the beach. 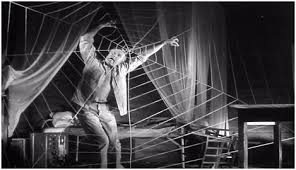 The next morning, they discover fresh water and decide to go exploring. They are quickly amazed and excited to find a cabin, but delight turns to horror when they open the door to discover a dead man hanging from a gigantic spider web. According to his journal, the man was a professor mining for Uranium, but he feared something terrible was about to happen to him. There's no indication how long the professor planned to be on the island, but the women estimate there is enough food to last them about a month
.

That night, Gary proceeds alone out onto the island where he is bitten by a giant spider and turns into some type of spider-man beast. He flees into the woods, leaving the women to wonder what has happened to him. The next day, seemingly possessed by uncontrollable violent urges, Gary kills one of the girls. The remaining women, still unaware of what has happened to him, have no idea that he is the one who has done this
. 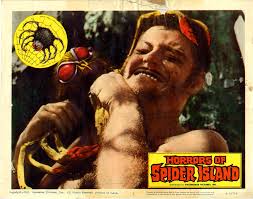 A month passes, and the women are running low on food when they spot a ship on the horizon. They are unable to signal it before it leaves, but two men arrive in a rowboat with supplies for the professor. They soon find the women, who tell them the professor is dead. As they all wait for the ship to return, they celebrate their last night on the island with a wild party. One of the men sneaks off to rendez-vous with a woman, but both end up being killed by Gary. Finally aware of Gary's fate, the remainder of the group hunts him down with torches until he flees into quicksand and dies.

Using The Horrors Of Spider Island

Spider Island isn't a beach resort destination in terms of PCs. The movie has a lot to offer if your willing to over look its incredible plot holes, flaws, and almost the entire movie.

Spider Island is some nameless little island in the Pacific that has been drawing victims in like flies. The whole set up smells of ancient degenerate vanish civilization long past its prime. 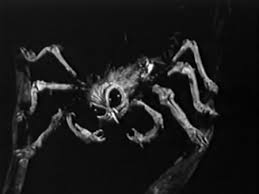 These degenerate creatures are last remains of the long vanished civilization of MU which worshiped the ancient spider god with blood,sacrifices, and their very souls. Each of these monsters infects another victim as part of its fifty year cycle of life.

Those bitten must transform into a horrid man/spider hybrid that lusts for human flesh and blood. These monsters are driven insane by the thoughts, lusts, and wants of all those who have come before them. They are in fact caught within a web of memory as much as the physical mutation.

This has cycle has been going on for centuries and continues to this day. The "Chosen" continue the cycle until they mutate further into the service of the spider god. Finally becoming four foot long, eighty pound hybrid/spider thing that feeds on the goats, deer, and other things on the island until another will take his place. 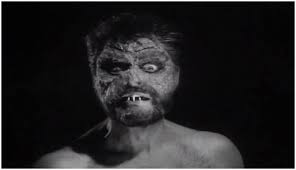 Slave  Of Atlach -Nacha Final Form
Type: Lycanthrope/Monstrous Hybrid
Armor Class: 6/13
Hit Dice: 2+2
Saving Throw : 13
Special: Poison (+1 Save or Die), Infection (Those infected must make a save vs poision or become a slave of Atlach-Nacha during the night),surprise, webs
Move: 18
Challenge Level/XP: 7/600

Curse of the Spider God 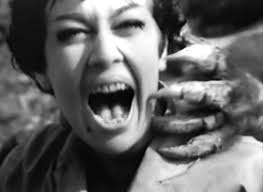 Those bitten by the monster must save vs poison or become infected with cycle of madness and depravity of the Spider God. During the evening they gain +2 to strength and constitution but -3 on intelligence, & wisdom.
They also gain a lust for human flesh and blood. Claws that add +1 to all melee attacks and resistance to all mind influencing spells.
After 1d4 years the slave will mutate further and further into the service of the spider god eventually becoming a fully fledged slave waiting for his next chosen. 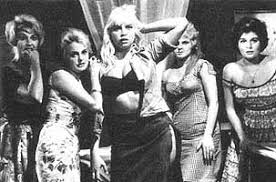