Yeah, I've been around the table top rpg hobby for a long while now at forty seven years old & I've seen my fair share of 'character guides' & companions. But then Adventurer, Conqueror, King shows up with its B/X leanings, proficiency system, and customization factor then more. So there are always books that are touted as essential out in the table top market but then you've got the Player's Companion for the Adventurer Conqueror King RPG. So what the hell is so essential in this book? Right off the top it features:"
16 new character classes to expand your  campaigns, including the anti-paladin, barbarian, dwarven fury, dwarven machinist, dwarven delver, elven courtier, elven enchanter, elven ranger, gnomish trickster, mystic, paladin, shaman, Thrassian gladiator, warlock, witch, and Zaharan ruinguard." One of the strengths of ACK's is how the PC classes fold into the campaign setting material. 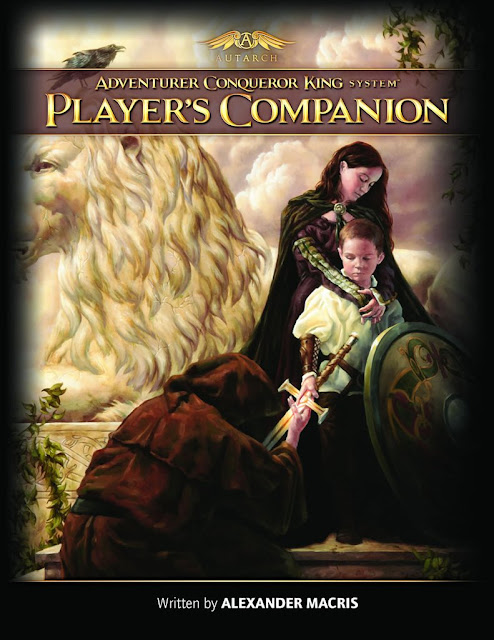 Everything in the sixteen new character classes ties in with the Auran Empire material and the implied setting set up from the character section of the main Adventuerer,Conqueror, King rpg rule book. This is a round about way of insuring the dungeon master & his players are going to be engaged in the world setting of the book but with enough room for customization. This is one of the differences between a second tier & generation OSR product or  more 'modern' rpg systems. The amount of crunch helps to keep things wide open for player choice.  This trickles down into the '238 character generation templates with pre-selected proficiencies, spells, and equipment options to create archetypes such as the Aristocrat Bard, Buccaneer Thief, Gladiator Fighter, or Runecaster Shaman' These PC materials wrap character creation into essentially a kit like structure that actually works similar too but distinct from the old Skills & Powers second edition set up.You choose one of the "archtypes" to cut down on character preparation time to get up & playing as soon as possible.
This section actually works & ties back into the Antiquity style of the Auran Empire. But it can be just as easily used with a straight up Sword & Sorcery style campaign setting of one's own design. Even magic system which adds new spells can easily be ported over to a sword & sorcery setting especially with dweomers such as dismember, earth's teeth, and trance, as well as ritual spells including cataclysm, plague, temporal stasis, and undead legion. 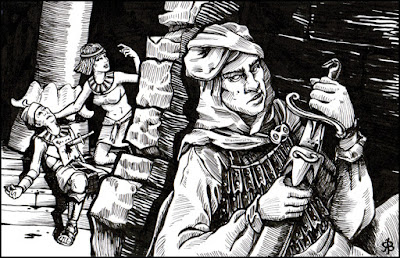 Do you have a favorite OSR PC class? Well there's a really nice DYI character customize class built section too. And additional domain rules that tie back into both the existing ACK's rules book & the Player's Companion;"A point-based customized class system that lets you create the perfect blend of fighting, thievery, divine, and magical power. The custom class creation rules are 100% backwards compatible with every class in the ACKS core rules and all of the classes in the Player's Companion." Once again there's more justification for dungeons & adventure locations to exist as the NPC can and will grow along with their PC counterparts;"Additional equipment and proficiencies to provide options for character classes new and old, plus prices for building traps to defend your stronghold". 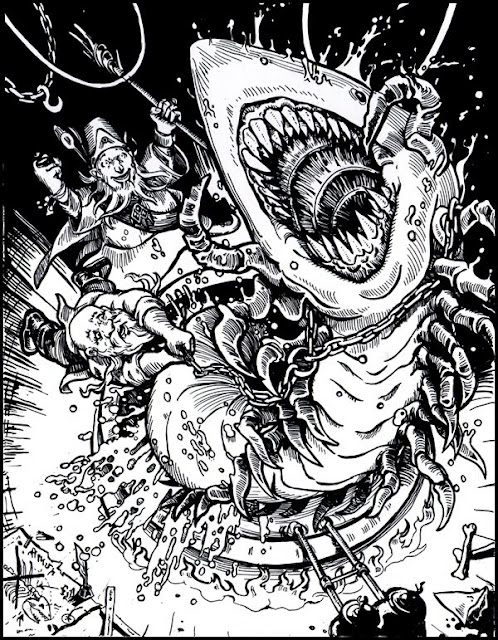 There is an an emphasis on the political and kingdom building aspects as intended right from the main ACK's rule book which continues straight though the The Adventurer Conqueror King System: Player's Companion. This is something  that makes it useful for the creation of both PC's & NPC's a welcome change of pace from many other rule books. All in all this well rounded approach to ACK's by the Player's Companion makes this one of the essential ACK's purchases. Its well put together, has a no nonsense approach to its subject matter and the sheer volume of material makes The Adventurer, Conqueror, King:Player's Companion a must have for any player or ACK's dungeon master. Clocking in at about thirty five dollars the hard cover has some really nice value for the dollar.
You Can Purchase The Player's Companion In Hard Back Here
Essentially all you need to run a complete campaign is the ACK's rule book & the ACK's Player's Companion 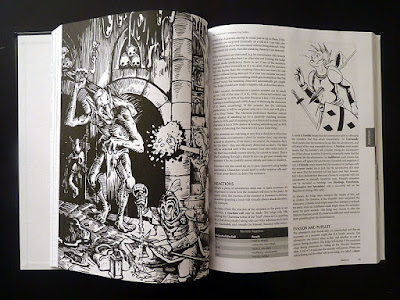 The Adventurer Conqueror King System: Player's Companion is on my short list of books to get in hardback for 2016 at some point.
Posted by Needles at 10:45 PM