After a fatal run with the Snakeriders of the Aradondo(available right HERE ) in which a series of fatal dice rolls caused a total TKP. Two of my players went on vacation out to California and the others wanted a different setting then the Lizard Coast. That was the other night's AS&SH game set upon my post apocalyptic Mars setting and thanks to the Dungeon From A Distant Star was pretty damn cool. Details HERE


This one require a bit of DYI but boy was it worth it. I turned down the Corman and turned up the Lovecraft.

The Beast From The Haunted Cave Adventure Set Up

Tonight's game was inspired by the cold as well as  a very old and terrible Roger Corman movie. The Beast from the Haunted adapted to AS&SH worked surprisingly well. The adventure takes place deep in the heart of Viking territory and takes place around an abandon Atlantian  gold mine. There have been a series of disappearances of some of the locals and the Viking rangers are very unsure of  tracks that have been seen in the area.
The mine has only recently been explored by a group of adventurers and their wizard who came across the Mi Go machinery that had been left behind. The beast was part of the original bio genesis guardians of the mine, the Atlantians would later take it over. The mi go mined certain rare earth elements, the gold was only part of a bi product left behind by the Fungus from Yuggoth. The Mi Go had made war with the Atlantian tribes in the area and the Atlantians took over operations after driving off the Mi Go. There were certain sections of the mine which were taboo. This was where the beasts slept in dreamless slumber awaiting the return of their Mi Go masters while alien machinery kept the guardians in a state of suspended animation. The Atlantian operations were wiped out during the Great Death plague that took these ancient tribes from the face of Hyperborea.
The Beasts were their creations part arachnid, part fungus, and created from the essence of certain demons from nameless alien hells.
Now an ancient nearby Viking  village is the target of one of these horrors that has been awakened by foolish adventurers.

The so called Primordial beasts have been used by the Mi Go for millions of years as guardians for their operations upon Hyperborea and thousands of other worlds. They have the characteristics of many creatures but are actually horrors unique to themselves. They make their homes in wide variety of locations but often enjoy cold or inhospitable climates with nearby human settlements. The beasts enjoy feasts on human and near humanoid victims who stumble into their clutches.  They will strike a
These horrors have a bite which places the victim into a near death like state unless save vs. poison is rolled. The victim is given a strange poison that not only keeps them alive and suffering but protects them from the cold. The beasts produces a special webbing that can hold a man sized creature stationary and protected against extreme cold. The beasts feed on their charges and lay 1d10 eggs within the victims who are conscious when the young eat their way out of them. This does 1d4 points of damage per round as the worm like young burst forth from the victim after feeding upon the marrow of the bones of the poor wretches.
The beasts often hunt down witnesses and other special victims that they single out. The creatures uses their inhuman senses to ceaselessly track their targets. They are able to project into the minds of their victims images of suffering prey and friends that they often take. Those who witness such sights will be at -2 on all rolls as the telepathic horror of these images takes it's toll on the sanity and mind of their charges. Only a save vs wands may lessen the impact of such horrors.
These horrors can live hundreds of years and amass a fortune in artifacts and gold from past victims. They know that rumors of such treasure bring adventurers and fool hardy explorers but these are not the only treasures to be had.
Many alchemists will pay good gold for samples of the beast's flesh and sections of its webbing. These are made into potions of regeneration and protection from cold. There is a 10% chance of those who use such things taking on certain characteristics of the beast or even becoming one themselves. 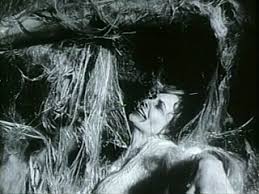