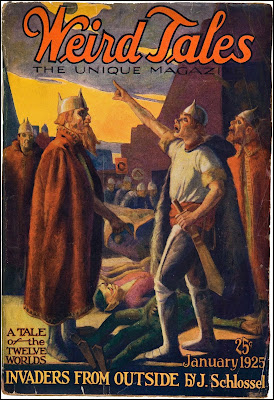 Download It Right Over
HERE
I was going to offer one of my favorite Mythos stories for this time of the year for download but instead stumbled upon this wonderful complete collections of HP Lovecraft's writings. I hope everyone has a fantastic and safe holiday and enjoys these tales of insanity and the Cthulhu Mythos.
The Festival is a tale of horror and depravity in the best New England tradition. It appeared in the January 1925 issue of  Weird Tales.
According to wiki it begins thus:
"It was the Yuletide, that men call Christmas though they know in their hearts it is older than Bethlehem and Babylon, older than Memphis and mankind." An unnamed narrator is making his first visit to Kingsport, Massachusetts, an "ancient sea town where my people had dwelt and kept festival in the elder time when festival was forbidden; where also they had commanded their sons to keep festival once every century, that the memory of primal secrets might not be forgotten."
And then bridges into the following:

with its ancient vanes and steeples, ridgepoles and chimney-pots, wharves and small bridges, willow-trees and graveyards; endless labyrinths of steep, narrow, crooked streets, and dizzy church-crowned central peak that time durst not touch; ceaseless mazes of colonial houses piled and scattered at all angles and levels like a child's disordered blocks; antiquity hovering on grey wings over winter-whitened gables and gambrel roofs; fanlights and small-paned windows one by one gleaming out in the cold dusk....

He locates his relatives' house, which has an overhanging second story, and is greeted by an unspeaking old man with "flabby hands, curiously gloved," and a "bland face" that he comes to suspect is "a fiendishly cunning mask". This mysterious greeter directs him to wait next to a pile of old books that includes a Latin translation of the Necronomicon, wherein he discovers "a thought and a legend too hideous for sanity or consciousness." At the stroke of 11, he is led outside to join a "throng of cowled, cloaked figures that poured silently from every doorway", heading to the "top of a high hill in the centre of the town, where perched a great white church." He follows the silent crowd, "jostled by elbows that seemed preternaturally soft, and pressed by chests and stomachs that seemed abnormally pulpy", into the church.

The procession enters a secret passageway below the crypt, eventually coming to "a vast fungous shore litten by a belching column of sick greenish flame and washed by a wide oily river that flowed from abysses frightful and unsuspected to join the blackest gulfs of immemorial ocean." There they engage in a "Yule-rite, older than man and fated to survive him", while "something amorphously squatted far away from the light, piping noisomely on a flute". The flute-playing summons

a horde of tame, trained, hybrid winged things that no sound eye could ever wholly grasp, or sound brain ever wholly remember. They were not altogether crows, nor moles, nor buzzards, nor ants, nor vampire bats, nor decomposed human beings; but something I cannot and must not recall. They flopped limply along, half with their webbed feet and half with their membranous wings; and as they reached the throng of celebrants the cowled figures seized and mounted them, and rode off one by one along the reaches of that unlighted river, into pits and galleries of panic where poison springs feed frightful and undiscoverable cataracts.

The narrator resists joining this expedition, even when his guide points out the family resemblance on his mask-like face, and shows him a watch with his family's arms that he recognizes as having "been buried with my great-great-great-great-grandfather in 1698." When a sudden effort to control one of the mounts "dislodged the waxen mask from what should have been his head", the narrator throws himself into the river "before the madness of my screams could bring down upon me all the charnel legions these pest-gulfs might
conceal."

He awakens in a Kingsport hospital, where he looks out to find a much more modern town, and is told that he was rescued from Kingsport Harbour after footprints revealed he walked off a cliff. Agitated to learn that he is near Kingsport's old churchyard, he is transferred to St. Mary's Hospital in nearby Arkham, where he is allowed to read a copy of theNecronomicon and find the passage that so disturbed him at his ancestral house:

The nethermost caverns...are not for the fathoming of eyes that see; for their marvels are strange and terrific. Cursed the ground where dead thoughts live new and oddly bodied, and evil the mind that is held by no head. Wisely did Ibn Schacabao say, that happy is the tomb where no wizard hath lain, and happy the town at night whose wizards are all ashes. For it is of old rumour that the soul of the devil-bought hastes not from his charnel clay, but fats and instructs the very worm that gnaws; till out of corruption horrid life springs, and the dull scavengers of earth wax crafty to vex it and swell monstrous to plague it. Great holes secretly are digged where earth's pores ought to suffice, and things have learnt to walk that ought to crawl.

Using The Festival For
Your Old School Sword and Sorcery Campaign
The story was inspired by Lovecraft's first trip to Marblehead, Massachusetts, in December 1922. Lovecraft later called that visit

The Festival is a great 'Christmas' story to mine for ideas. A party is brought into an ancient city with a decadent and hoary past of horror. The party is lead through a series of weird local rites and then given into some of the final high weirdness perhaps as sacrifices to the gods of the gulf or the local 'Great Old Ones'. Meantime when they escape this parade of terror they awaken to the 'real' campaign location with the usual day light experience.  Did it really happen or were they subject to the past, undead present or a perhaps a time warp of horror?!?
Remember : " For it is of old rumor that the soul of the devil-bought hastes not from his charnel clay, but fats and instructs the very worm that gnaws; till out of corruption horrid life springs, and the dull scavengers of earth wax crafty to vex it and swell monstrous to plague it."

Merry Christmas and Happy Adventuring!
Posted by Needles at 9:23 AM