Sunday I was roped into running a game over at my friend Larry's place because his regular game of AD&D Greyhawk had been ripped apart by the flu. This meant that I had to come up with something fast.
There are movies that I've always thought of as rpg adventures and wanted to run as one. The Crawling Eye aka The Trollenburg Terror makes a fantastic adventure if used in the right way.
First a bit of background on Crawling Eye aka the Trollenburg Terror according to Wiki:
The Trollenberg Terror is the title of both a 1956 "Saturday Serial" ITV UK television programme and a better-known 1958 black and white science fiction film. The latter is also known as The Crawling Eye, Creature from Another World, The Creeping Eye, and The Flying Eye. Both versions are directed by Quentin Lawrence and featureLaurence Payne as journalist Philip Truscott, who investigates unusual accidents occurring at a Swiss resort. The film also stars Forrest Tucker as United Nationstroubleshooter Alan Brooks. Peter Key wrote the story for the serial, and Jimmy Sangsterscripted the film version based on Keys' story. It was the final film to be produced by Southall Studios, one of the earliest pioneer film studios in the UK.

The plot with major spoilers ahead
One of three student climbers is mysteriously killed on a mountain, his head ripped off. Two sisters are on a train to Geneva. Anne faints as they pass a mountain and on waking, she now knows all about the town and that there is something wrong with the mountain. She decides they should get off at the next stop, Trollenberg. She was part of a mind reading act in London.
Alan, who was on the train with them, goes to an observatory a little way up the mountain, where Professor Crevett asks for his help. He is told that despite many accidents, dead bodies are never found on the mountain and a radioactive mist cloud is always on its south side. Similar incidents took place in the Andes three years earlier before suddenly vanishing without a trace. It is thought the monsters come from a very cold planet and make their own atmosphere, a rarefied mist.
Anne is giving a mind-reading exhibition at the hotel when she sees the two men in a hut on the mountain. Dewhurst is asleep when the other, under a mental compulsion, walks out. She faints again. Alan phones the hut and finds out Brett has in fact left. The cloud has moved down to where the hut is and the other man hears a noise outside. Something horrible and unseen kills him. The cloud moves back up the mountain.
An expedition from town goes to look for the two men. Anne back in town is uneasy and says the men should stay away from the hut. The hut is locked on the inside and everything is frozen. A body is found under the bed with its head torn off. Anne decides to investigate herself by cable car as a spotter plane arrives to search the mountain area. A man is spotted on the mountain but when the first rescuer gets there, all there is a rucksack. When he looks inside, he sees the man’s severed head. He is then attacked by a madman (Brett) with a mountain axe who kills the second rescuer.
Anne feels a compulsion to climb the mountain but they stop her going past the observatory. Later Brett arrives back at the hotel, behaving weirdly, then tries to kill Anne but is knocked down. He hits his head but there is no blood from a wound. This was similar to incidents in the Andes where a man killed an old woman who had powers similar to Anne's, being able to receive thoughts. They arrived ten minutes too late to find him dead, as in dead for 24 hours.
Brett kills a man and escapes from the room he was locked in and goes looking for Anne with a knife but is shot and killed by Alan. News is that the cloud is now coming down the mountain toward the village. They decide to retreat to the observatory by cable car; the observatory is heavily fortified to withstand avalanches and so should provide a measure of protection from the monsters.
A monster arrives in the mist at the hotel. As people begin piling into a cable car, a mother suddenly realizes her daughter is not there, and Alan goes to rescue the child in the hotel. He does so and narrowly escapes the monster. They make the cable car and head up the mountain but the delay has given the mist a chance to reach the cable car platform; the motor and cables start freezing and the car starts jerking but it manages to get them to the observatory and four clouds now start heading towards them. They have one hour.
Hans, who tried to get out by road, turns up and they let him in but he has the symptoms of being a puppet of the monsters and goes looking for Anne. They manage to stop him from strangling her, and kill him. The monsters climb towards the observatory, where the men are making Molotov cocktails to combat the monsters, who prefer intense cold. An aerial fire bomb raid has been ordered on the observatory which it should survive, having three-foot-thick concrete walls.
Philip hits one with a Molotov cocktail, which sets it burning, but he is caught by a monster on the roof. A Molotov cocktail from Alan persuades the burning monster to let Philip go. Later, Philip does the same for Alan when a monster manages to break through the thick wall to try and get at Anne. The plane arrives to begin its bombing raid and the monsters burn.

Unleashing The Trollenburg Terror
There are several key factors that bother me about the movie and have for years. United Nations Inspector Allen Brooks has more power then many world leaders. There's also the fact that he knows more then what's going on. Professor Crevett has dealt with Allen before and this has all the classic ear marks of an operation gone horribly wrong.

Allen Brooks doesn't look like your classic hero instead there's something vaguely sinsister about him. "A smoking man" quality that one finds in the old classic  X files villain.
There are actually two stories within the Trolleburg Terror.From Wiki: "Similar incidents took place in the Andes three years earlier before suddenly vanishing without a trace. It is thought the monsters come from a very cold planet and make their own atmosphere, a rarefied mist."

Professor Crevett knows something is going on. He's got unlimited funding and an observatory that seems more aka to a cosmic duck blind then it does a complex to study cosmic radiation. Many years later we would see a similar phenomena come into being with Project Arrow Head. The "aliens" had come not from another planet but another dimension.

The players basically came into Trollenburg years later and on the trail of a rogue Allen Brooks. Accidents were starting on the mountain once again and Professor Crevett's son Hymric  was now in charge of the observatory. The events of Trollenburg had been hushed up and for the good of humanity.
There were 6 players
3 Trouble shooters of the United Nations "Project Smoke"
And  3 Psychics from the shop.
The whole crew were lightly armed with hunting rifles, a pistol or two, and several shot guns.

After a quick investigation and a trip up to the facility via cable car. The whole place seemed in working order except a strange cloud on one of the nearby peaks.
The PCs ordered a fly by and it was an ordinary cloud.
It wasn't until the party uncovered the fact that Trollenberg is part of a series of special ley lines that run throughout the mountains. The party climbed the summit of a nearby peak and found a neo lithic pylon and a series of human bones along with some very nasty looking ice crystals.

That's when they encountered their first
Crawling Eyes 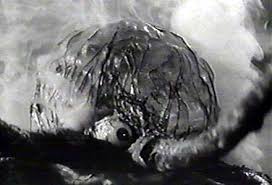 
Save: L9
Morale: 9
Mutations: Psionic possession, Gas generation,  Animate Dead (special)
Hoard Class: III, IV, IX, XXI
The crawling eyes have been sneaking into our dimensions for eons. These horrors from beyond the Outer Darkness move to invade our realities through rends in the cosmic fabric. They are not the Great Old Ones but a foul independent race of monsters. Many psychics can tune into the alien thoughts and foul plans of these creatures. The door of these transmissions is two way and the foul beasts will know of the psychics. They will bend every effort to eliminate the threat to their plans.
These foul diseases upon the multi-verse are related to both the Brain Lashers of Mutant Future and the Mind lords.
They will decapitate anyone that they come across and feed upon their blood in many instances.
These foul beings will drain certain beings of their blood and coat the flesh in a bio organic ice crystal matrix. This enables the monsters to psionically animate the victim as an intelligent zombie. Hand eye coordination will be reduced and the nerve damage to the victim will be in evidence. Any skill check will reveal the possession of the victim by the Eye. Flame attacks on the victim will cause degeneration and complete destruction of the zombie.
These zombies are often used to eliminate any psychics or psionically active individuals. 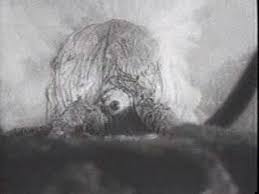 The party was killed to a man by a cult of "crawling eye zombies"! They vow revenge next Monday with another United Nations Team being sent in!
Posted by Needles at 8:59 AM