Carnival of Souls For Your Old School Horror Campaign

Carnival of Souls is a cult classic movie that can be used to enhance an old school horror campaign. Carnival is a perfect mid campaign event/adventure that can have PCs wondering and horrified. Here's a trailer of this cult classic released in 1962.

Mary Henry (Candace Hilligoss) is riding in a car with two other young women when some men challenge them to a drag race. As they speed across a bridge, the women's car plunges over the side into the river. The police spend three hours dragging the murky, fast-running water without success. Then Mary miraculously surfaces. She cannot remember how she survived.
Mary then drives to Utah, where she has been hired as a church organist. Odd things happen along the way. At one point, she can get nothing on her car radio but strange organ music. She passes a large, abandoned pavilion sitting all by itself on the shores of the Great Salt Lake. It seems to beckon to her in the twilight. Shortly thereafter, while speeding along a deserted stretch of road, a ghoulish, pasty-faced figure (The Man, played by director Herk Harvey) replaces her reflection in the passenger window and stares at her. When The Man suddenly appears in front of her, she swerves off the road. At a gas station, the attendant tells her the pavilion was first a bathhouse, then a dance hall, and finally a carnival before shutting down In town, Mary rents a room from Mrs. Thomas; John Linden, the only other lodger, wants to become better acquainted with the blonde newcomer, but she is not interested. That night, she becomes upset when she sees The Man downstairs in the large house and retreats to her room. Mrs. Thomas, who kindly brings her some food, says she did not pass anyone.
Soon, Mary begins experiencing terrifying interludes when she becomes invisible and inaudible to the rest of the world, as if she simply is not there. When The Man appears briefly in front of her in a park, she flees, right into the arms of Dr. Samuels. Samuels, though he acknowledges he is not a psychiatrist, tries to help her.
Her new employer, the minister (Art Ellison), is a bit put off when she declines his suggestion of a reception to meet the congregation. When she practices for the first time, she finds herself shifting from a hymn to eerie music. In a trance, she sees The Man and others of his ilk dancing. The minister, hearing the strange music, denounces it as "profane" and insists upon her resignation.
Terrified of being alone, Mary agrees to go out on a date with Linden. When they return home, he talks his way into her room, but when she sees The Man in the mirror, she becomes upset and tries to tell him what has been happening to her. He leaves, believing she is losing her mind.
After talking with Samuels again, Mary believes she has to go to the pavilion. There, however, she finds no answers. 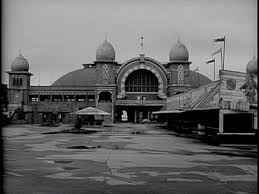 Other ghouls join The Man. Mary tries frantically to escape, at one point boarding a bus to leave town, only to find that all the passengers are ghouls. Then she wakes up, showing that she dreamed this sequence at least. In the end, she is drawn back to the pavilion, where she finds her tormentors dancing. A pale version of herself is paired with The Man. When she runs away, they chase her out onto the beach. She collapses, and they close in.
The minister, the doctor and the police are baffled. Her bare footprints in the sand (the only ones) end abruptly, but there is no trace of her.
In the final scene, the car is finally located and pulled from the river. Mary's body is in the front seat. 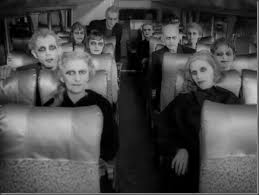 Lost By Ways Of The Carnival of Souls

The Carnival of Souls represents a brush with the other world. The ghouls and the man are a perfect plot device to throw at PCs. They're implacable and utterly indestructible because they're already dead. The "Man" and his ghouls might well appear  to a group of PCs who have had a brush with death and not escaped. 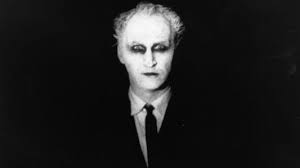 For a game of Call of Cthulhu the man and his ghouls could be a nice change of pace. The PCs have a brush with death or a client whose not escaped the clutches of the supernatural. "The Man" comes to claim them and the PCs become ensnared in the events.

For a game of Kult the Carnival and its patrons may be mechanisms of the Illusion that are still working and still in play. The man may be an agent of the Death angels or something even more sinister. 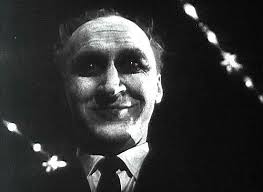 For a post apocalyptic game such as Mutant Future, the Carnival may be a sad reminder of the forces of the supernatural still functioning in the wake of the apocalypse for all eternity. For a retroclone game the Carnival may be an echo of the fight between Order and Chaos.  Death being the final balance between the two forces. 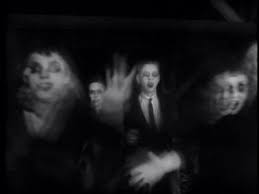 For a game of post future horror like Dark Conspiracy, the Carnival may be a protodimension of death and the "Man" may be its Dark Lord. The Carnival makes a perfect location for the recovery of an artifact that has fallen into the hands of one of its victims.

The  "Man" avitar of death,relentlessness, and entropy
Posted by Needles at 7:58 AM