The Beast From Haunted Cave For your Old School Horror Campaign 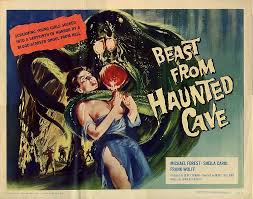 This is the sort of late night cable fest movie that I would have watched when I was living in Boston. The movie has the finger prints of an early Roger Corman effort.

The movie makes an excellent horror/gangster mash up adventure set in the modern era. . Filmed in South Dakota at the same time as Ski Troop Attack, it tells the story of bank robbers fleeing in the snow who run afoul of a giant spider that feeds on humans.
The movie actually comes off with a decent plot according to Wiki:

A group of criminals, led by the ruthless Alexander Ward (Frank Wolff), hatch a plan to steal gold bars from a vault in Deadwood, South Dakota. Ward sends one of his henchmen, Marty (Richard Sinatra), to set an explosive in a nearby gold mine, the detonation of which will act as a diversion for their heist. Although Marty, accompanied by a local barmaid (Linné Ahlstrand), succeeds in setting the explosive, he encounters a beast (Chris Robinson) in the mine. The beast kills the barmaid, but Marty escapes with his life.
The next morning, the explosive goes off as planned and Marty and his gang succeed in stealing gold bars from the vault. They set off to a remote cabin, led by a local guide named Gil Jackson (Michael Forest), where they hope to be picked up by a plane. Gil is initially unaware of their plans, but he becomes suspicious when he hears reports of the robbery on the radio and discovers that they're carrying handguns. They reach the cabin without incident, but once there, a violent snowstorm delays the plane's arrival. Marty's "secretary," Gypsy (Sheila Noonan), is taken by the young Gil and tells him that Marty plans to kill him once the plane arrives. Gil and Gypsy take off back to town together.
Marty, who still carries unpleasant memories of his encounter with the beast, has all the while been concerned about being followed. He encounters the beast again during the trip to the cabin, but his companions think he's losing his mind. Eventually, however, they become convinced of the beast's reality when they see it attack the other of Marty's henchmen, Byron (Wally Campo). Despite their fears of further attacks, the gang is set on tracking down Gil and Gypsy before they reach town, so they head to a nearby cave. Another snowstorm forces Gil and Gypsy to take shelter in the cave as well, which turns out to be the lair of the beast. In the final struggle, the beast kills the remaining gang members, but Marty shoots it with a flare gun before he dies. Gil and Gypsy are left to watch as the monster is burned to death.

Using The Beast From Haunted Cave For Your Old School Horror 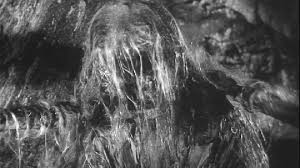 The movie has a lot to offer a DM for any number of game systems. For a game such as Dark Conspiracy the plot can be stream lined and the creature is another  horror awakened by the coming of the aliens. There are a few monsters already in the game that can be adapted as the beast and perhaps the cave system is actually a small proto dimension.
The plot and movie elements can easily be transported back to the 1920s or 30s for a complete night's adventure. The follow up to the murders of all these people as well as the loot will certainly attract bounty hunters, treasure seekers, and who knows what else. The beast itself could be a child of Atlach- Nacha simply gathering its sacrifices and feeding until the stars are right again.
For a game like cult the beast simply a creature of Gaia who broken through the illusion and has its own agenda. The beast could gather a cult about itself and furthering its own plans in the area.
For any of the OSR games such as Mutant Future the creature presents a unique hazard to the plans of adventurers and a dangerous post apocalyptic encounter. Who knows how long the beast has been active? The cave system could be a ruined temple or megadungeon that has been operating for thousands of years. Adventurers could destroy the beast only to have their modern descendants dealing with the same horror again.
The Beast From The Haunted Cave 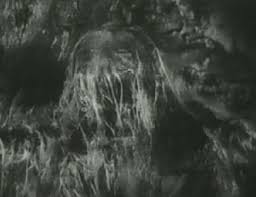 This horror has lived within its extensive cave system for thousands if not millions of years. This spidery like humanoid horror operates quite successfully from within its labyrinth maze like  cave complex. Many have been murdered by its claws. The monster lures its victims with illusions of past victims to its den. There the monster webs its victims and lays its eggs within the flesh. The victims are slowly drained of blood and finally feasted upon by the young. 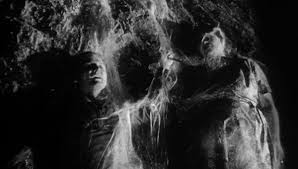 The Megadungeon of the Beast 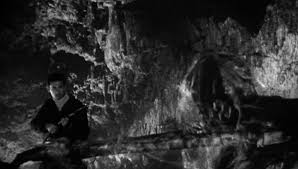 Tales are told by the ancients of extensive caverns filled with ancient treasures from beyond the time of the Apocalypse. The beast spreads these tales among the natives of the hills to lure the desperate  the adventurous and the stupid to its clutches! There the beast feeds on the flesh of any who venture into its claws. The caverns seem to extend for miles in many directions.  The place has not be entirely mapped or cataloged. Many black mages come to collect one of these horrors as their own or worship it.
Posted by Needles at 9:10 AM