Messing With ArchMagic From Mayfair Games 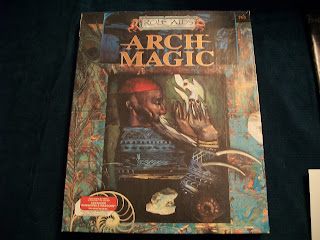 "Archmagic
Beyond the veil of natural laws is a realm of infinite power, where the dreams and nightmares of mortal man await the touch of high sorcery to bring them light and life.
This deluxe sourcebox includes:
A 64-page sourcebook containing Magical Grimoires, Artifacts, Archmages, and featuring Archmagics the most powerful spells in fantasy roleplaying!
A 32-page Adventure book designed to send your players on a magical adventure of epic proportions!
A 48-page fold-out Map Book containing 8 beautifully detailed fold-out maps of Mystic Places such as The Gibbering Caverns, the City of Bone, and the Macrodrome!
12 striking game aids that will bring new dimension to your exploration of the unknown.
Dare the impossible: Master Archmagic."

The Archmagic box set in the Role Aids material from Mayfair Games Might seem like nothing more then a high level fest for power monger PCs but nothing could be further from the truth. There's always been this weird vibe echoing through cosmic horror & weird sword & scorcery fiction  that wizards have been messing with the keys of creation. The good ones you never hear about & the others are messing about in Odin's dust broom closet. This set is basically about those messing with forces beyond the pale of man. 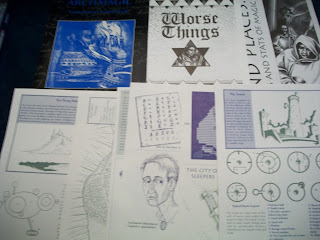 What's in The Box
User summary:
"Adds high-powered spells and items to any fantasy campaign, but is "presented for use with ADVANCED DUNGEONS & DRAGONS".
Rules for Archmages, Artifacts, Grimoires and Archmagics are presented.
Includes an adventure utilizing the rules within. Also includes maps of various mystic places and props depicting various powerful items.
Contains:
64 page rulebook _ The Rule book is chalk full of campaign altering spells & weird high level historical event style mover & shaker spells. The type of thing that can alter the entire direction of a campaign & put the very god's teeth on edge.
For example Lesser Apocalypse: 13th level, a year and a day to cast, 6d12 months for the apocalypse to manifest, can destroy a country or a continent. Almost impossible to stop without the intervention of a god or infernal prince (i.e., massive quest that can take 6 months to 6 years). This dove tails right into the horrors of the Apocalypse box

The 32 page adventure reminds me of the Planescape box set. Things such as  Mystic Places such as The Gibbering Caverns, the City of Bone, and the Macrodrome!These places are where the elite of the archmagic world hob nob or die. The whole thing could be dropped on to a high party of PCs with little problems. Personally I'd simply disect all of them for use as standing alone locations that could be adventures into themselves
48 page map book -The map book is a thing of beauty that dovetails the locations I talked about above & enables a DM to add his own stamp on the whole affair without too much trouble.
12 loose single-sided sheets of props -There are odds & ends here that enable a DM to create their own solid horror style adventures.

There are more then a few uses today for this box set. The Lovecraftian ideal of messing with forces beyond 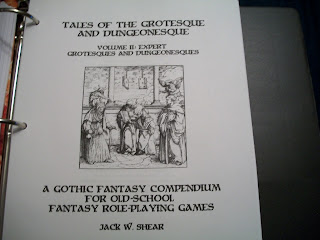 Ten Reasons to Use Arch Magic For Horror
Posted by Needles at 7:35 AM