Down Among The Dead Adventure For Dark Conspiracy Review & Commentary 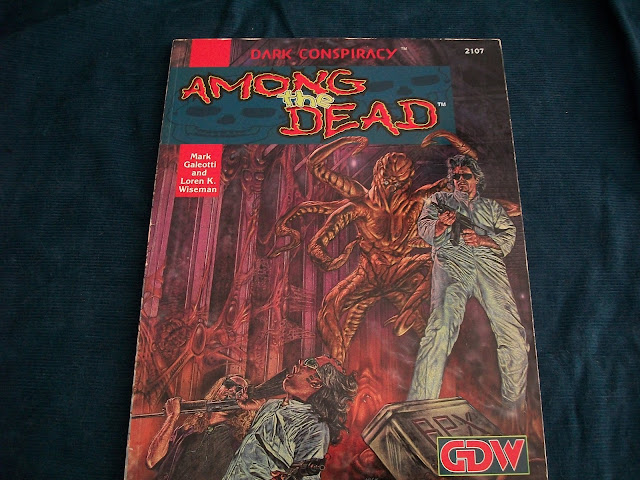 "As the Earth slips further into chaos and despair, some places have far less to slide: One of New York City's largest children's hospitals, funded by 'private donations,' is being used to provide orphans as human raw material for some unspeakable purpose. This could have gone on for a long time, had not one of the nurses stumbled on part of the secret. She vanished, just another victim of the city's lawlessness, but leaving a worried and suspicious uncle. On another part of the globe, Moscow, amidst the ruins of a Russia blighted by pollution, war, hunger, and fear, there stands an age-old figure of unimaginable evil. Once he was called Koshchey Bessmertny, Koshchey the Undying, and he became the dark enemy of Russian fairy tales and folklore, a name to whisper when the moon passed behind a cloud. In the 1930s and '40s, they called him another name, and he became the sinister mind behind the deaths of millions in the Siberian Gulag. What he does not know is that the disapearance of a simple provincial nurse threatens to bring these loose strands together into the noose that may at last catch him. If, that is, the players are able to face and overcome the horrors waiting them... Among the Dead."

So says the blurb from the back of Among The Dead on of the many adventures from GDW for Dark Conspiracy. With the recent events of New York & New Jersey. My thoughts & prayers for those areas continue. What a real life horror!
This adventure seemed suddenly very topical & harder hitting. The adventure takes us deep into the weirdness of DC. 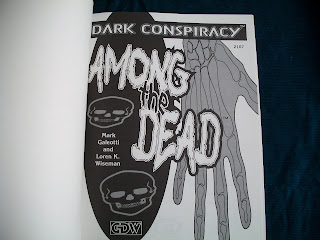 From the retro kitsch artwork of the interior panel into the DM's guide we're in a world quite different from the reality of even now. This the world of NY & Moscow through the DC lense of  a horror comic. 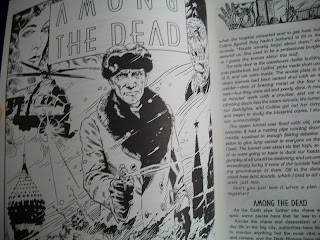 The whole adventure is part/horror novel/part spy noir adventure with a twist of DC. Quite a lot of DC actually. 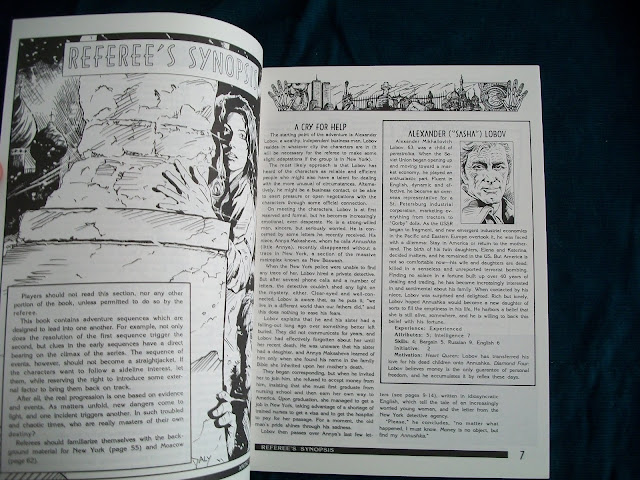 I'd like to take the time to take a look at something namely how DC handled NPCs its quite brilliant in a way. They give a gloss over approach to them. Here's some details, history, a bit of background & then boom your stats. That's exactly the way early OD&D & AD&D handled it & that tradition carries on here. Old School DM's take note! 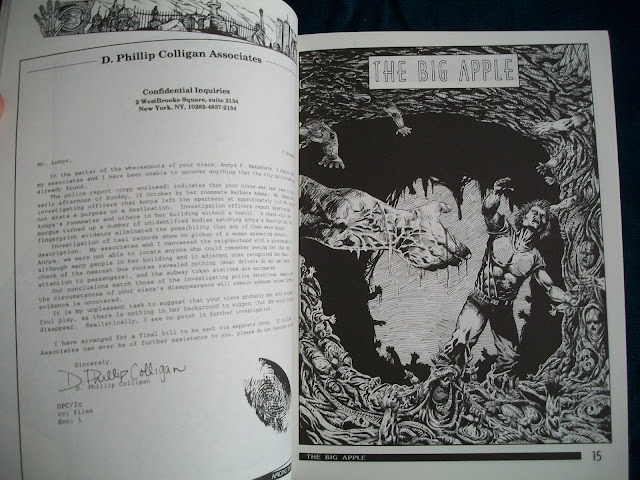 Creepy artwork abounds throughout the book but notice for a moment the hand out on the left there. The letter & the bloody fingerprint. The letter is an actual part of the adventure not an add on after the fact but a real solid part. The deeper we get into the adventure the more Russian it becomes. There's lots of New York surrrounding a core of Moscow & beyond here. 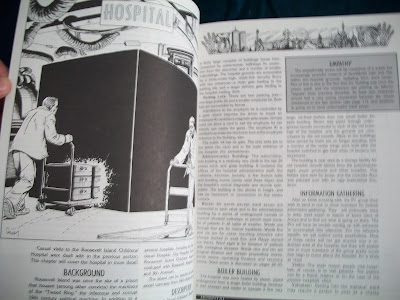 The Moscow of DC isn't a nice place in the least! The whole place is like a Greater Era Depression nightmare of totalitarianism & oppression gift wrapped with Koshchey the Undying dressing on top. There are plenty of opportunities to die in this one & worse. 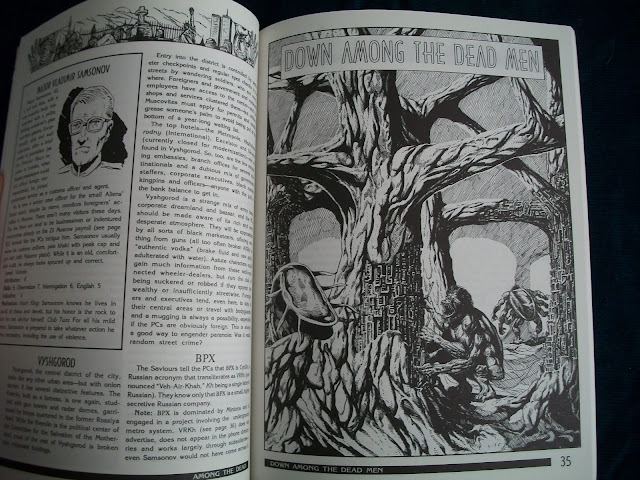 Bio Giger style Russian monsters with lots of dripping gooey stuff for characters to explore. The megadungeons in this adventure need to be expanded. The locations are great but its hurry up because we're moving on now. That's where you come in  & add your personal touch. 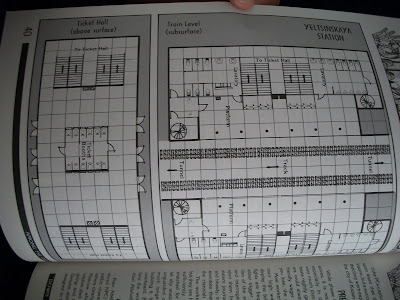 The ubiquistic GDW maps. They made some excellent maps for their products but they're useful not atmospheric like AD&D adventures that really pop with the D&D style flavor. Or even Gamma World where Legion of Gold's map is a character itself as much as the adventure is. Still it does fit the world of the Greater Depression. 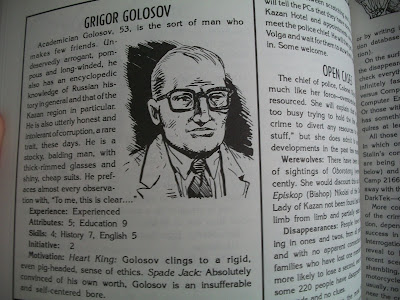 Here's that DC NPC thing happening again. A few details, how to play the guy as DM, Stats, & boom he's in the can & done.
Bottom line is the adventure good? Yes it is! Is it still useful? Utterly & its still topical even now! Whose going to use it? A DM running these locations! New York, Moscow, & beyond!
The Bottom line is also the bottom line at $4.50 at Amazon or less its a steal & here's why! 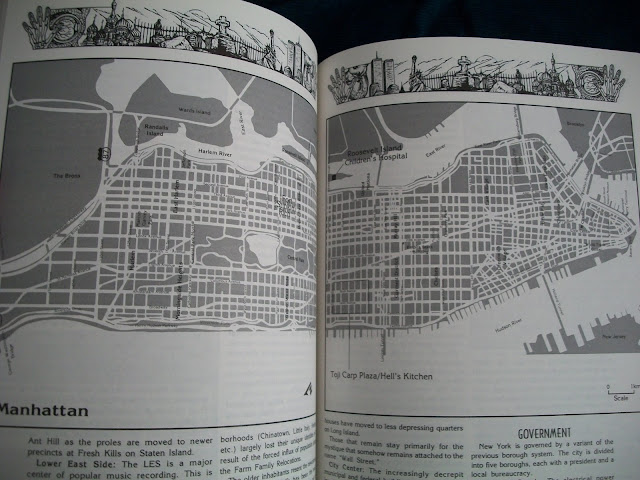 I've used Among The Dead time & again because its really three products in one. Its a handy adventure with a nifty plot that introduces more Dark Tek not found in that source book. Its a guide book for a future Greater Depression era New York & Moscow because GDW packed more details into their products then others did. 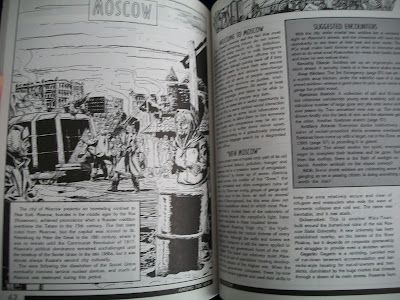 Its a fantastic resource for a Mutant Future, retroclone DM looking for a different spin on monsters from Russian legend & beyond. The settings are easy to play around with for other games such as Labyrinth Lord where the players know the monsters of the Retroclones inside & out. 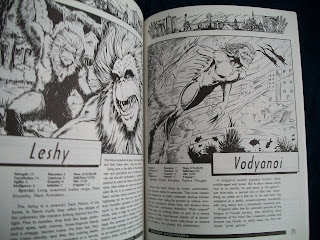 The book is a great resource for some new monsters for your post apocalyptic adventurers because they've got energy weapons. There are a few twists & turns here as well. There are several plot threads that can easily be adapted to a wide variety of games 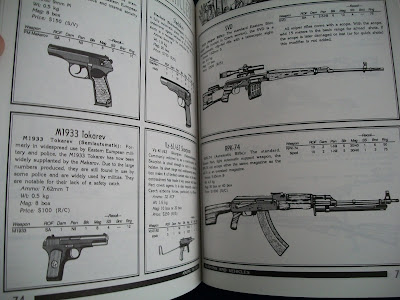 GDW loved their 90s era details on weapons, npcs, powers, dark tek, etc. So as a source book for a retro post apocalyptic game this book is a gold mine. There's weapons, monsters, & gear to mine for a metric ton of two different locations & more. 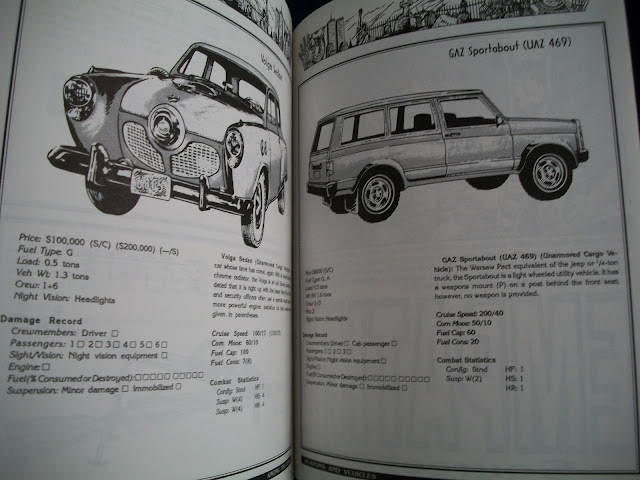 The bottom line is that GDW deserves more respect then it gets these days. The retroclone DM can use this stuff all day long & still come back for more! After all this has one of the DC's most dangerous Dark Lords


Koshchey the Undying
Posted by Needles at 11:52 AM