Way back in the 90's or so I bought a pack of Judge's Guild modules back in the early 90's and among them was Geoffrey O'Dale's Inferno module. The module has been with me on and off for the better part of thirty years. This was actually a requiring of the module from the early 80's. For me the module offered a nice alternative to the well known and admired Ed Greenwood Dragon magazine module. Geoffrey O'Dale's Hell made quite the impression on me. And in some ways continues to.
Growing up on a steady diet of horror comics with Warren, Skywald,Marvel, D.C. and many others. Hell was the ultimate wilderness crawl. Reading through the module and going to a Roman Catholic grammar school didn't turn me off in the least. In point of fact this module was responsible for me reading Dante's Divine Comedy in its entirety.   But the module has far more to do with horror comics and Dante's Inferno then it has to do with Christianity at all. In fact the module is very, very deadly and it took every ounce of energy and skill to survive it.
Inferno always gave Judge's Guild's City State of the Invincible Overlord series of modules a very deadly razor's edge  of darkness to their adventures. Sure everything looked pretty funny with evocative covers. But your adventurers could end up in the pit with a cursed scroll, magic item, crossing the wrong entity or god. The ways to get their were myriad but there were very few ways of getting out much less surviving.
I ran an entire campaign for about two years in the pit. The PC's couldn't return to Earth at all, Hell changes characters if they survive. 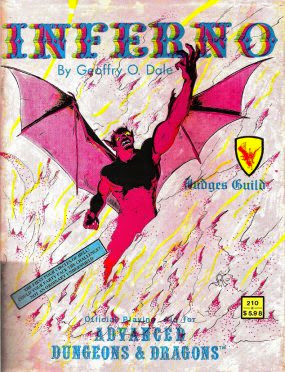 Which brings me to my recent brushes with Spell Book games, Geoffrey O'Dale never really left gaming per say. I saw an issue of 'Fight On' magazine where the circles for Hell were completed. This brings me to Spell Book games, which is Geoffrey's company that has taken the original Inferno concept and turned it into an entire campaign setting by itself. This is an entire line of AD&D first edition style products with an eye to providing a line of weird and dangerous adventures set in a Dante style Hell complete with a whole array of demons and devils. These are highly detailed Gazetters and adventure books set in the Pit itself. They really have a style all their own and detail some very nasty adventure locations within Hell.
The Inferno Bestiary is a complete overview of all of the demons and devils of the adventure modules as a stand alone product. Just page after page of demons,devils, and monsters free from any baggage at all.
This makes them perfect to drop in and run with your old school games. This is especially nice for an AD&D first edition style game where you need a monster to add into a old school adventure and just want something dangerous, diabolical, and out & out mean.


According to the Drivethrublurb:
Spellbook Games releases the Second Edition of Inferno: Bestiary.  This edition includes all of the monsters and creatures from the original Bestiary, including more than 70 unique Devils from the Inferno Hell, plus more than 200 additional new creatures created for the Portal to Adventure rule set. This Bestiary includes more than 750 total entries.  This edition particularly fills a gap in the Portal rule set in that it includes an extensive collection of aquatic creatures.
As an old school DM this is nice book for constructing my own Hells and peppering them with new and incredibly diabolic monsters. The book is on the expensive side but it does its mission quite well.
If your not sure if this book is for you then there is a no cost solution you can take a look at in the form of the free Diabolic Denizens book that's available from Spellbook games.
Right Over
HERE

With the Diabolic Denzins book you get an overview of the monsters, stat block, and much more for free. You can kick the tires, look into the demons and monsters. Get a feel for the product and much more.

The Inferno Bestiary, Second Edition does exactly what it says on the tin and provides a whole swath of monsters completely background free and concisely mapped out for you to use in your old school games as you see fit. The creatures are hideously dangerous and incredibly nasty with a complete eye towards ripping your PC's apart and coming back for more. Personally I can see me using some of these in several old school campaigns. I give this a nice solid four out of five and look forward to checking out more of Spellbook games material in the future.
Posted by Needles at 10:34 PM