Grab It Right Over
HERE
So I finally received my physical copy of  'The Hanging Coffins Of  The Vampire Queen' , the OSR vampiric tour de force by Mark Taormino. This module is for any number of OSR retroclones and it really does a wonderful job of trying to plug into the the older edition or retroclone of your choice.
Mark has a passion for D&D and AD&D, he's also a screen writer as well as a game designer out in California all of which comes through in The Hanging Coffins. The plot goes something like this :
'Death or freedom? The Vampire Queen has challenged a small band of her worst prisoners to escape from her wicked dungeon lair. With all of your original weapons, magic items and possessions, it is up to you to outwit and fight your way through terrible traps, beastly monsters, and all the horrific surprises she has arranged for you'
Right off the bat this module has a wicked sense of humor about itself  but its still a nasty & deadly little read through for an AD&D style first edition module.
The writing is tight, the plot inventive, and play is wicked. Have a few PC's on standby for this one. Seriously, this adventure is very nasty but in a good way.
I have to say that I was very pleased to feel a stiff cardboard backing to the envelop right out of the gate. That's a good sign that the game company or hobby store that your dealing with knows what its doing. It helps to preserve the module or game product from the postman. Take note game companies for future shipments. 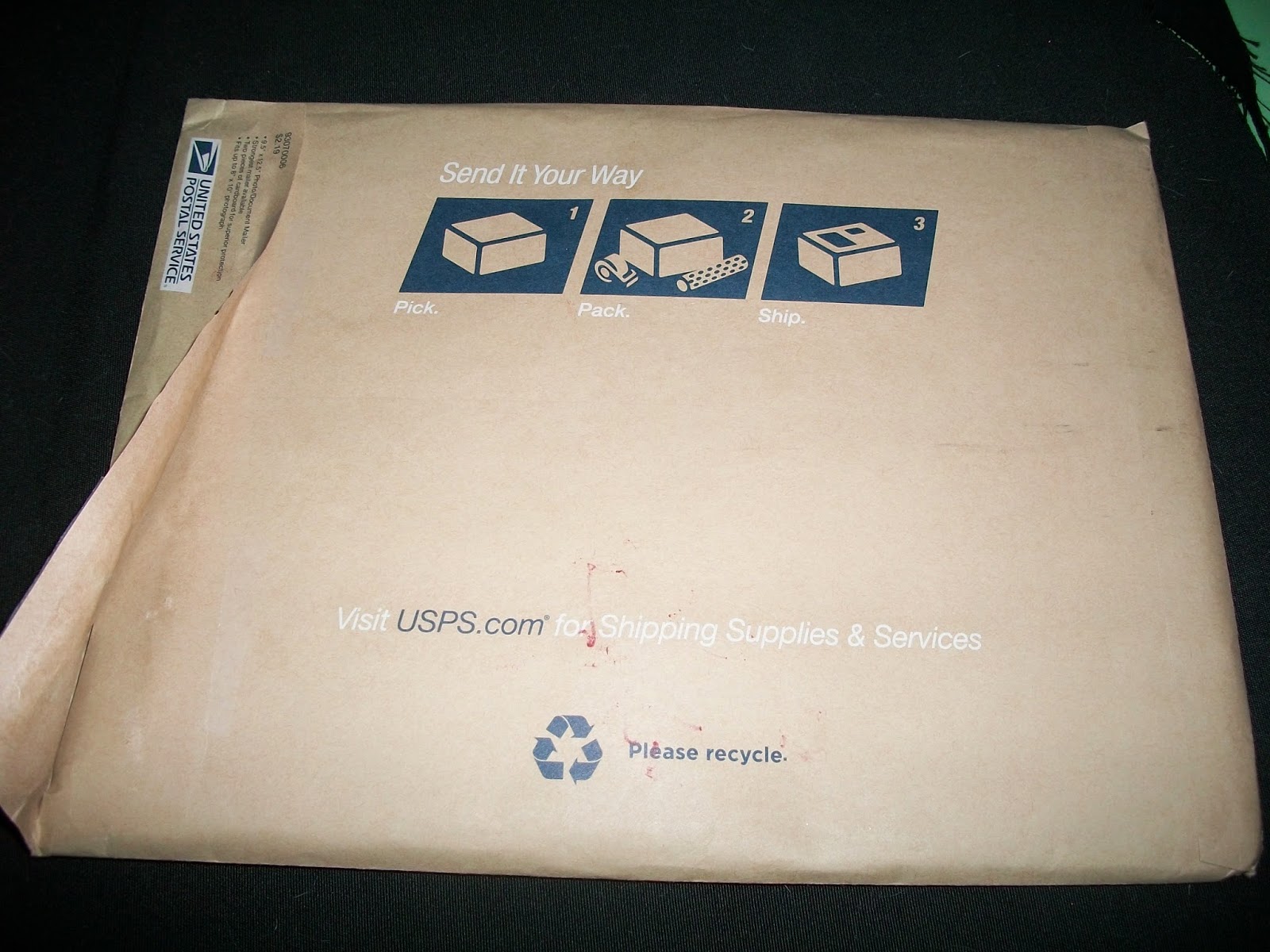 Good quality packing material makes all the difference as well. It basically means that the company or person cares enough to hand pack their stuff. This is one of the reasons why I prefer the smaller game companies to the mass market stuff out there. Also you don't get that 'Christmas morning' gift feeling unpacking a pdf. 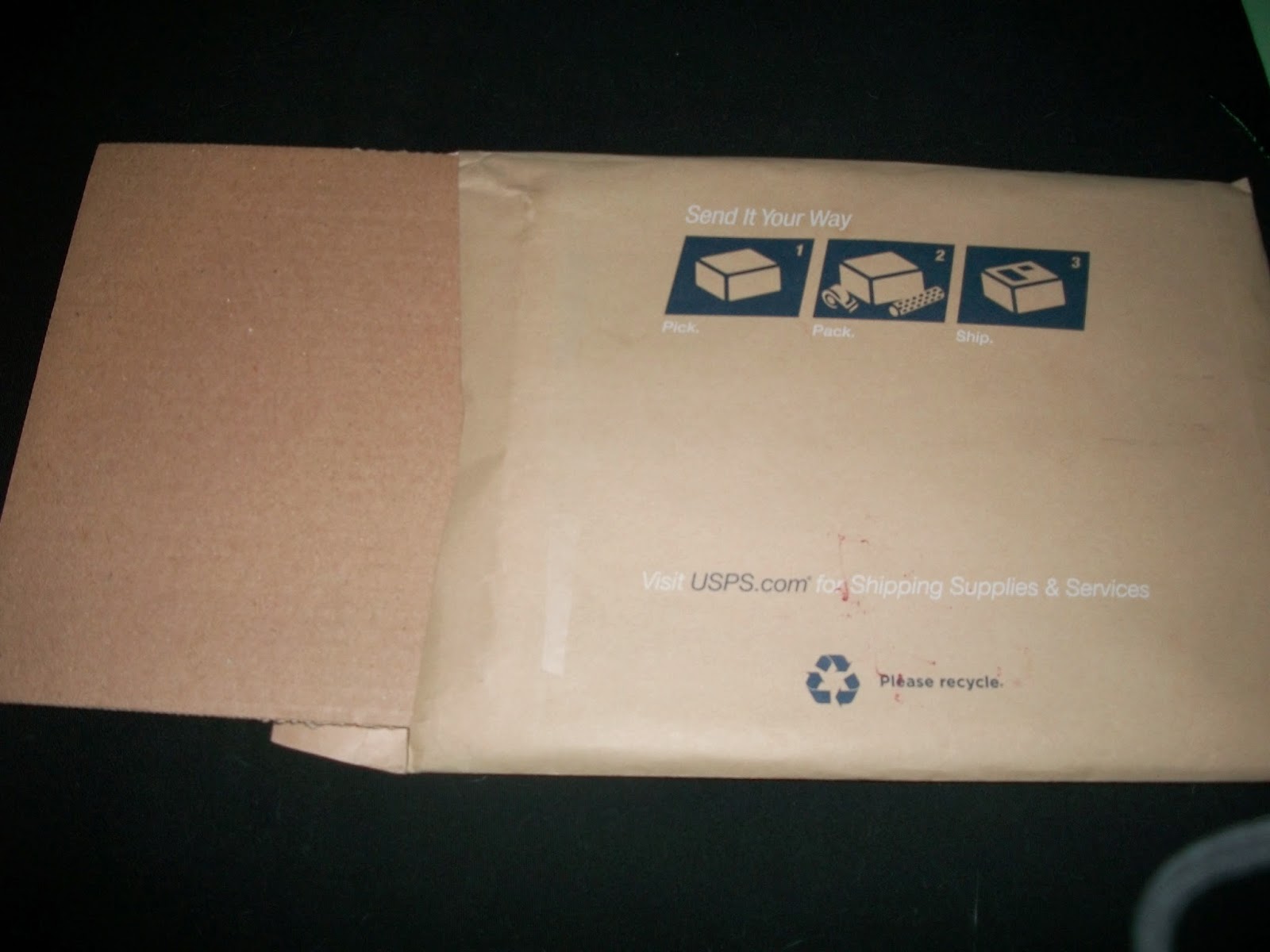 I'm greeted by the Vampire Queen herself whose sealing the adventurers doom with a kiss, a very nice little bonus to an already nice old school adventure package. The author is setting the tone of his adventure with the little details of artwork that make this a total package. The sense of humor is one that is here in spades, a darkly playful bit of fluff that goes a long way to making this a real winner of a module in my book. 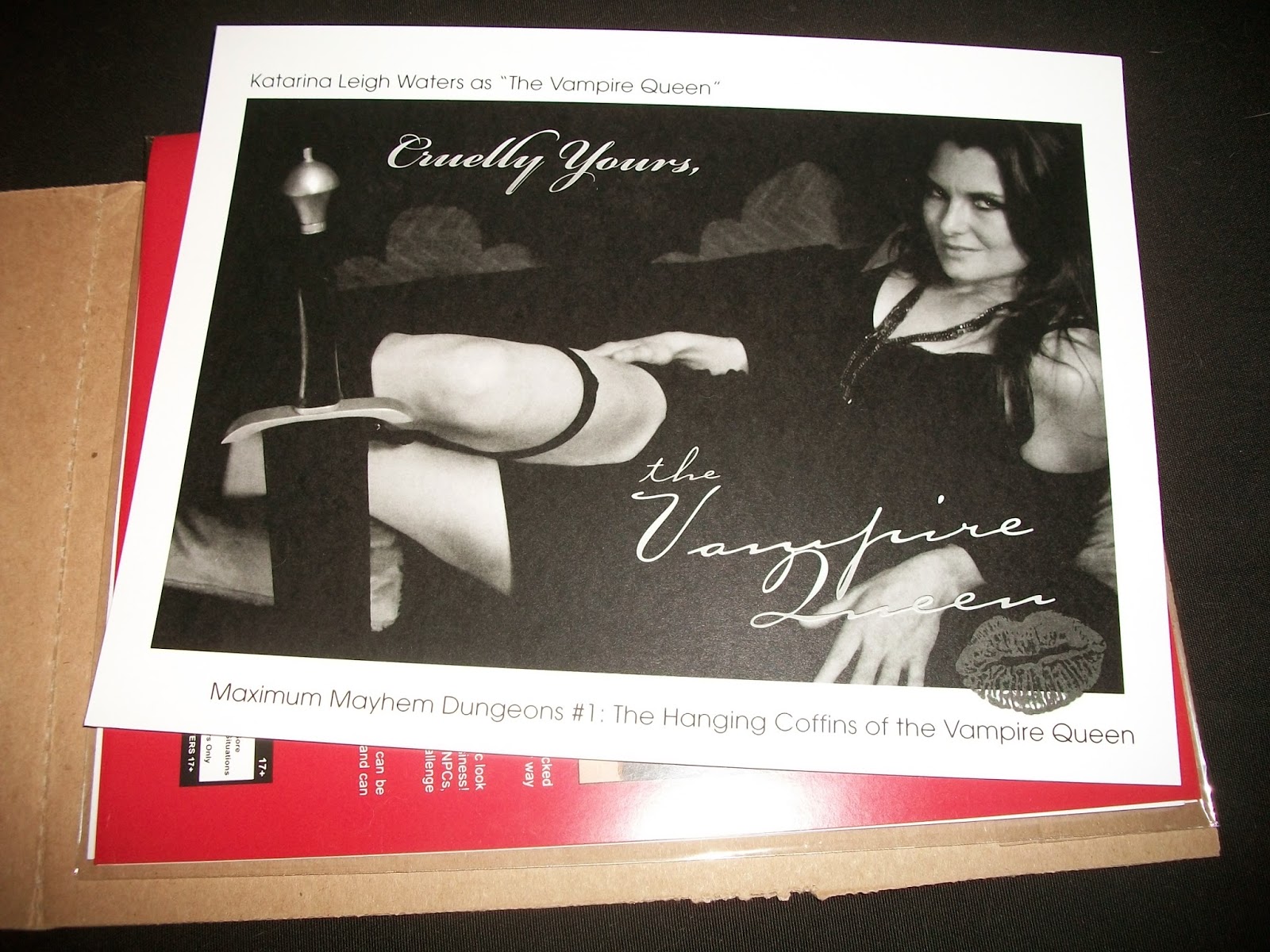 The next thing comes across in the physical book that is the module,this book is sealed up with a lovely comic book collector bag in addition to the cardboard wrap around. Yes, I'm making a big deal about this because I've recently gotten a book from 'Fleabay' and well we've all been there. In this economy good packing makes for happy gamers and DM's. The artwork screams 'Old School 'right out of the gate! 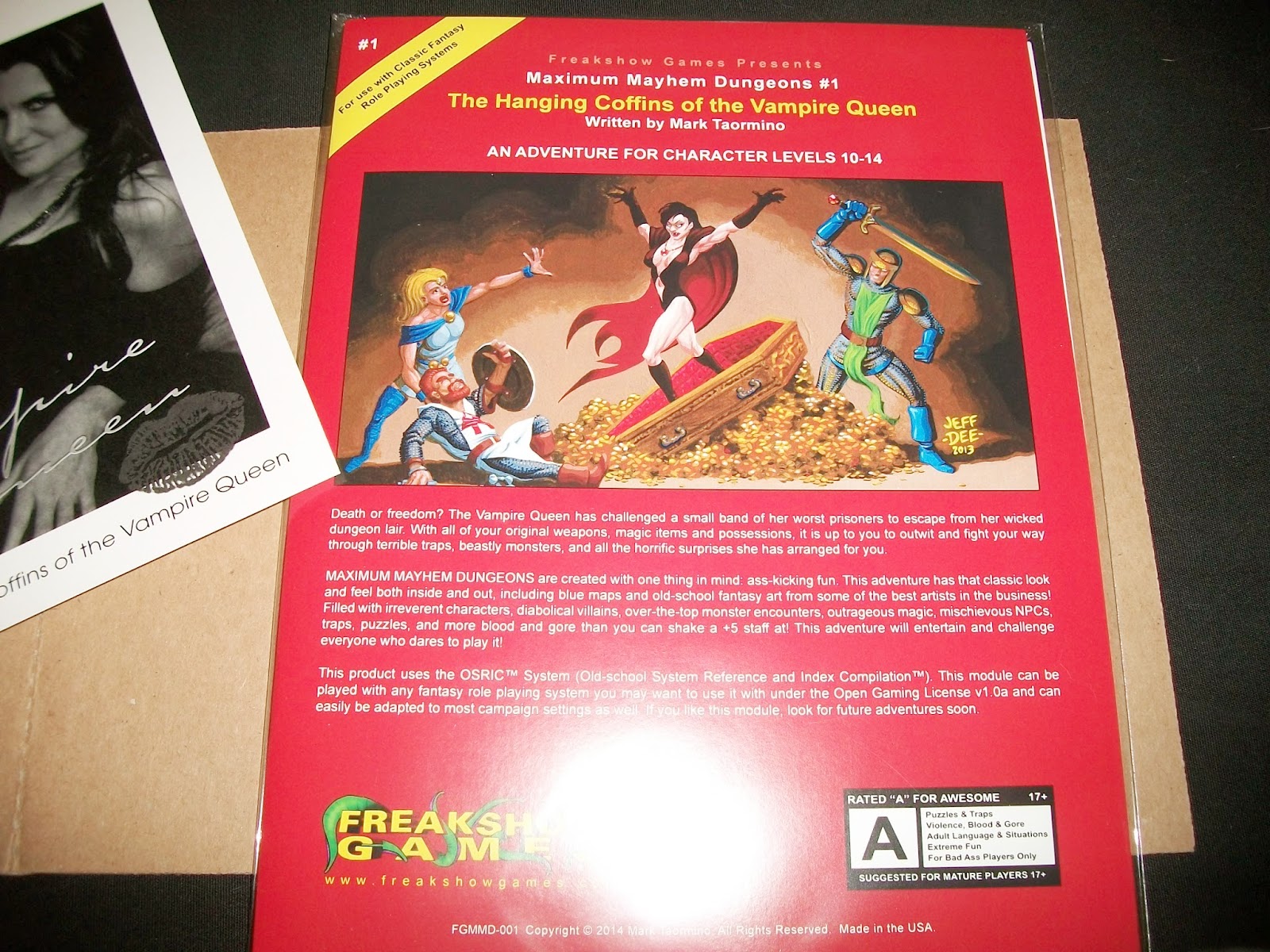 The page count is a hefty one and the paper stock is good quality as well as the wrap around cover. Mark is using a nice printer as well. Good quality in a module means solid shelf life over the coming years which equals solid utility in the years to come. Loving the Jeff Dee cover art which pops even more in person and the back cover as well sells this one. 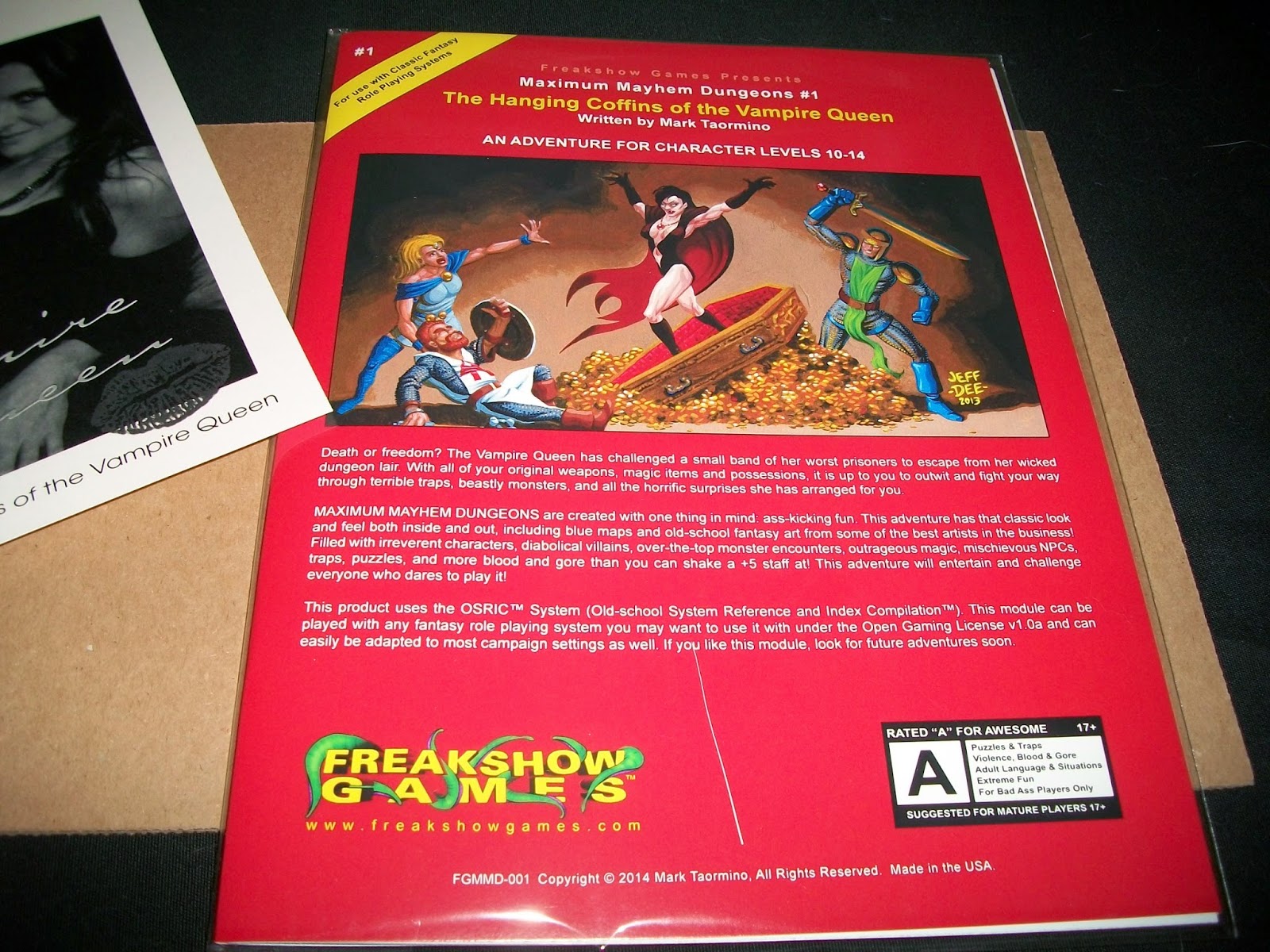 The module sells you on the adventure just like those old first edition AD&D modules, it almost jumps into your hands and says, 'play me!' You can see where to take a feather from another old school writer's cap, the art sets the tone and stepping points for the book here. So far I'm loving everything I'm seeing. 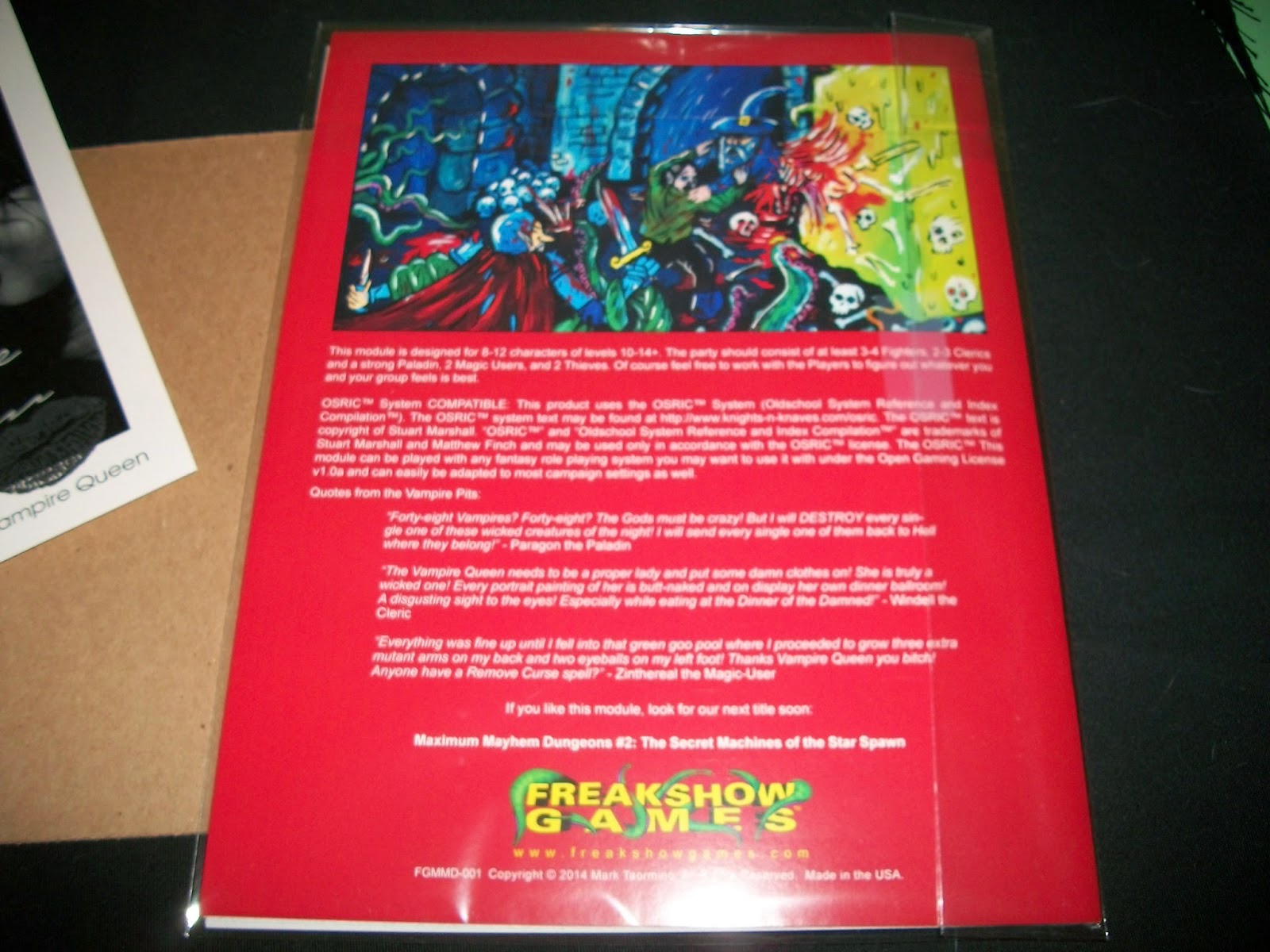 Overall my initial impressions are very favorable that this module was worth the time and energy for the Kickstarter. 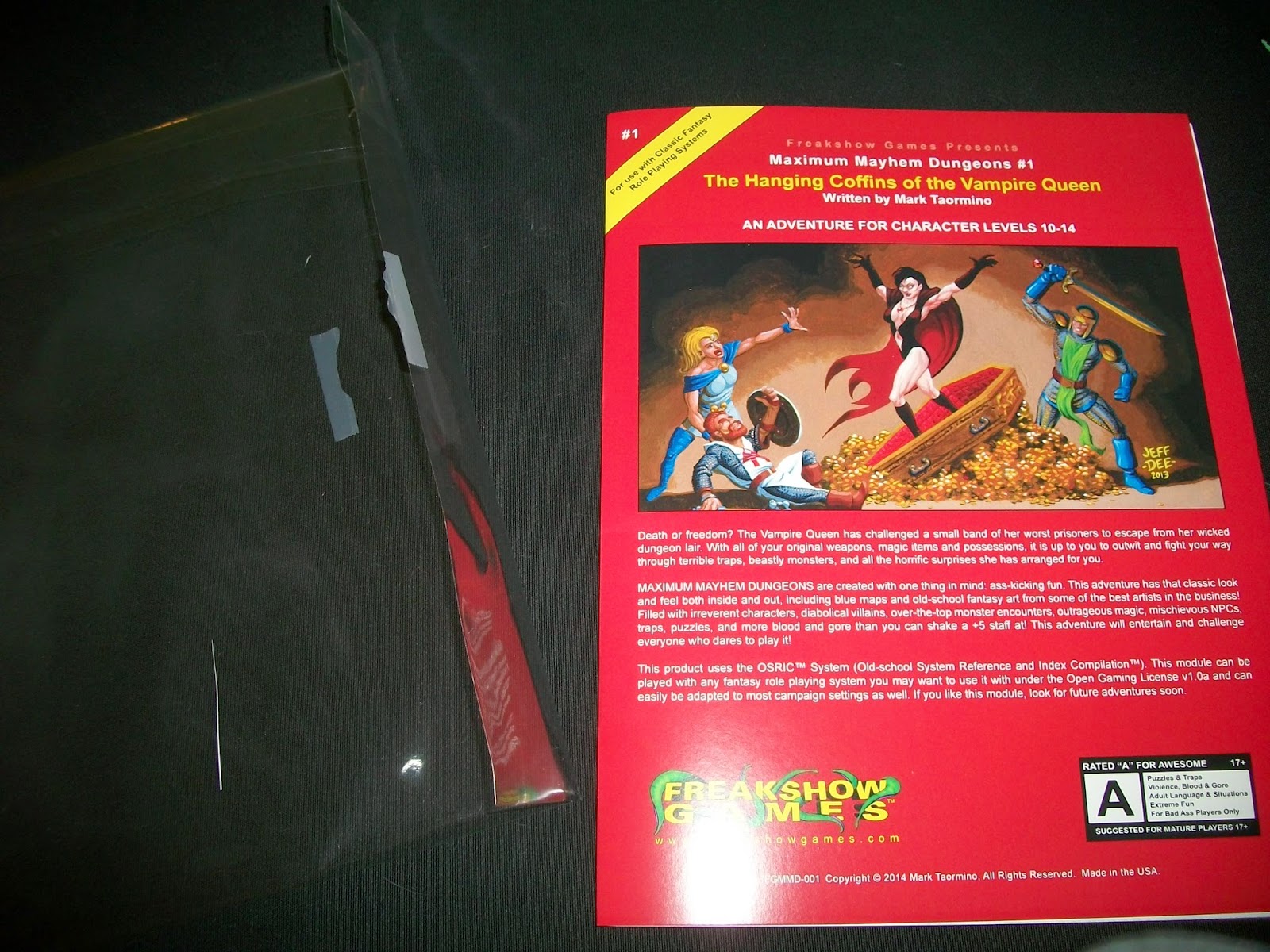 The wraparound cover maps are very well done and I recognize the cartographic style of Alyssa Faden and a very clever back joke to the adventure map itself. Nice. 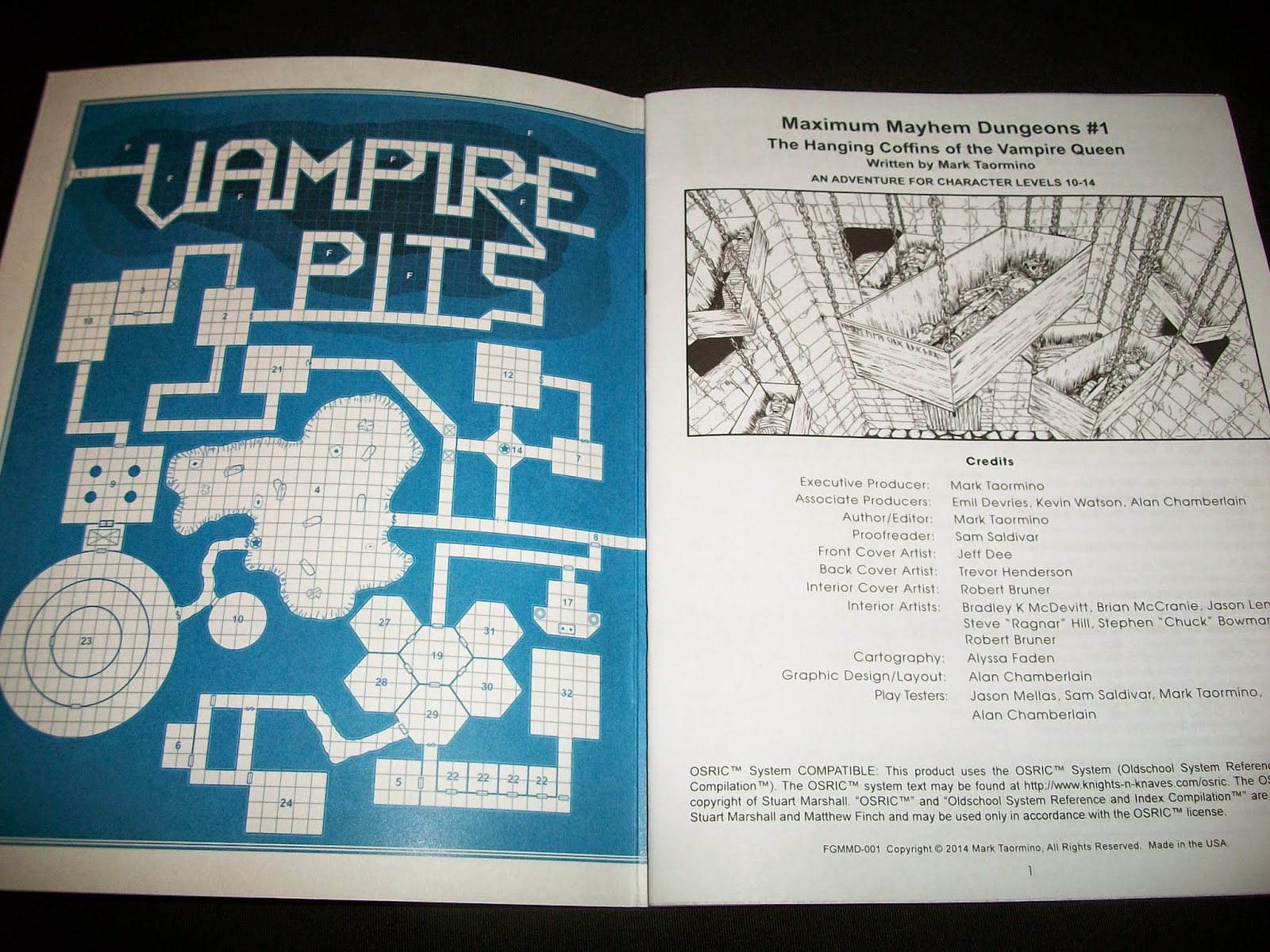 That wrap around cover map is very well done and reminds me of some of the very early TSR products from back in the day. 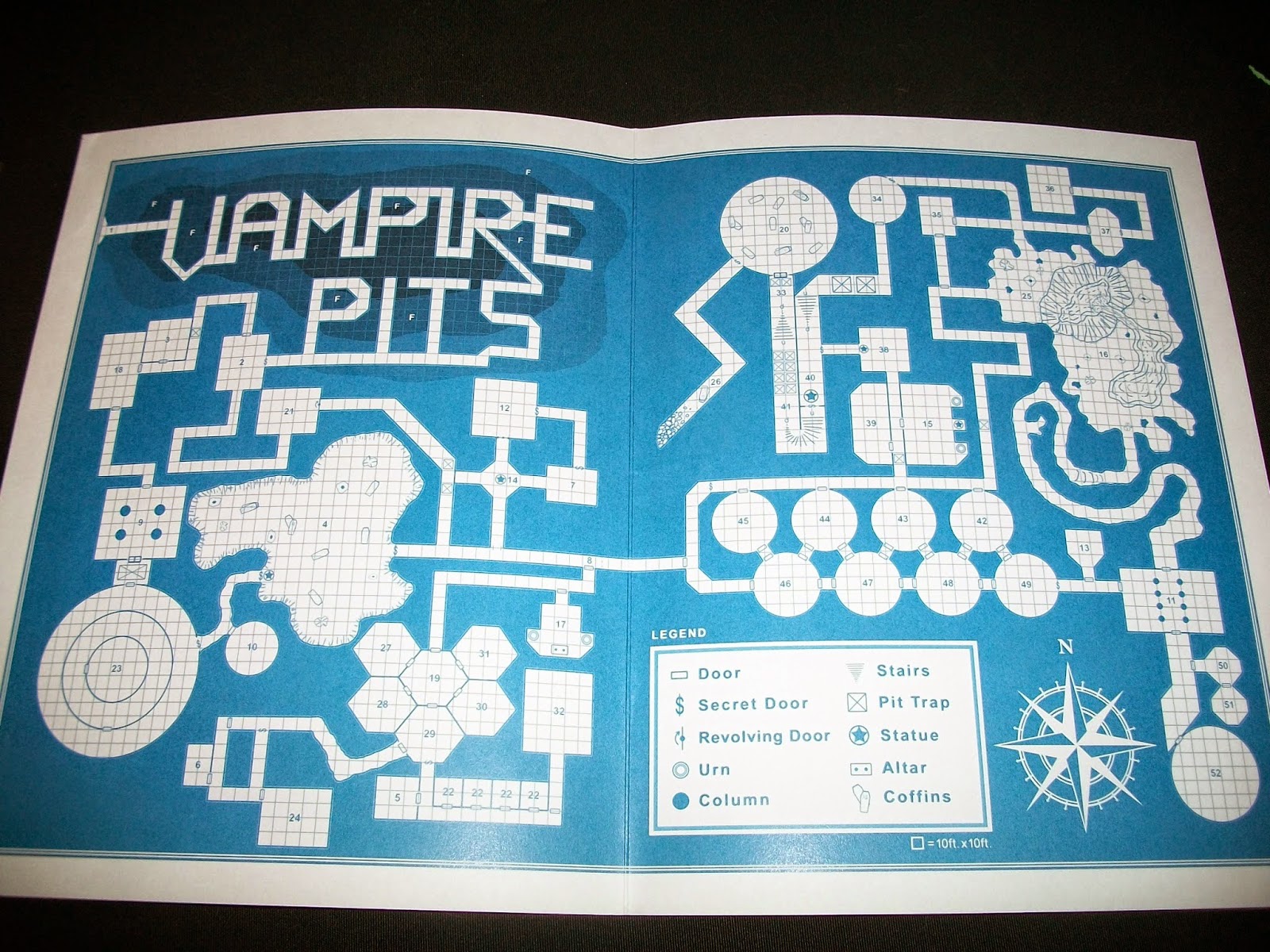 As we start dive into the background of the module with the introduction, it becomes clear that the Vampire Queen is a vile villain of epic scope that could take over the undead scene of the campaign that she's let loose in. That's not a bad thing but man is this adventure well done but please bring some extra PC's to the fold. The adventure says for levels ten through fourteen on the cover and their not kidding. 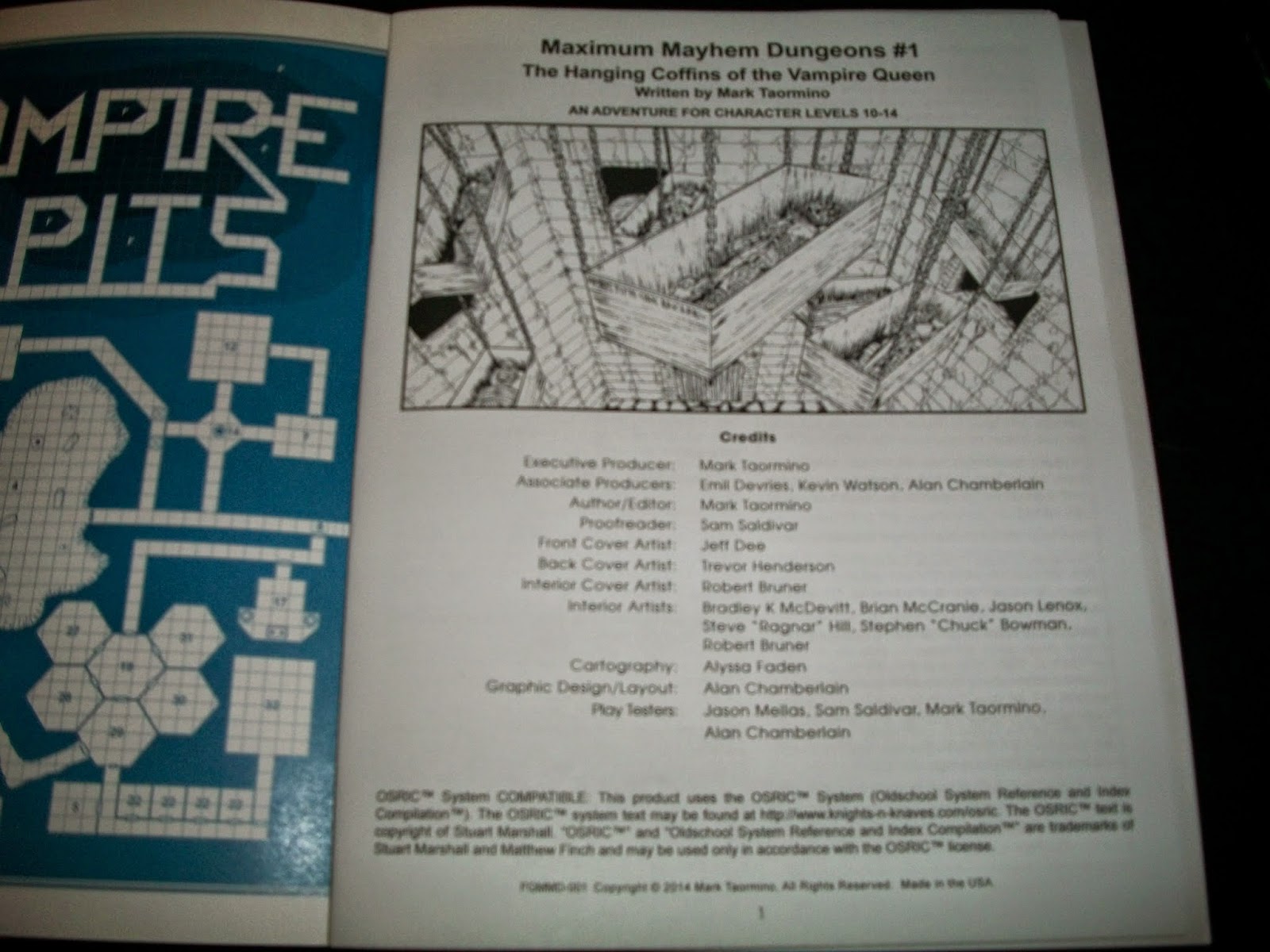 As your reading through the Hanging Coffins keep that 'wrap around' cover handy for reference, this adventure's encounters move fast and remind me of some of the Goodman games adventures I've seen in the past. The writing here is playful, funny, and very deadly. 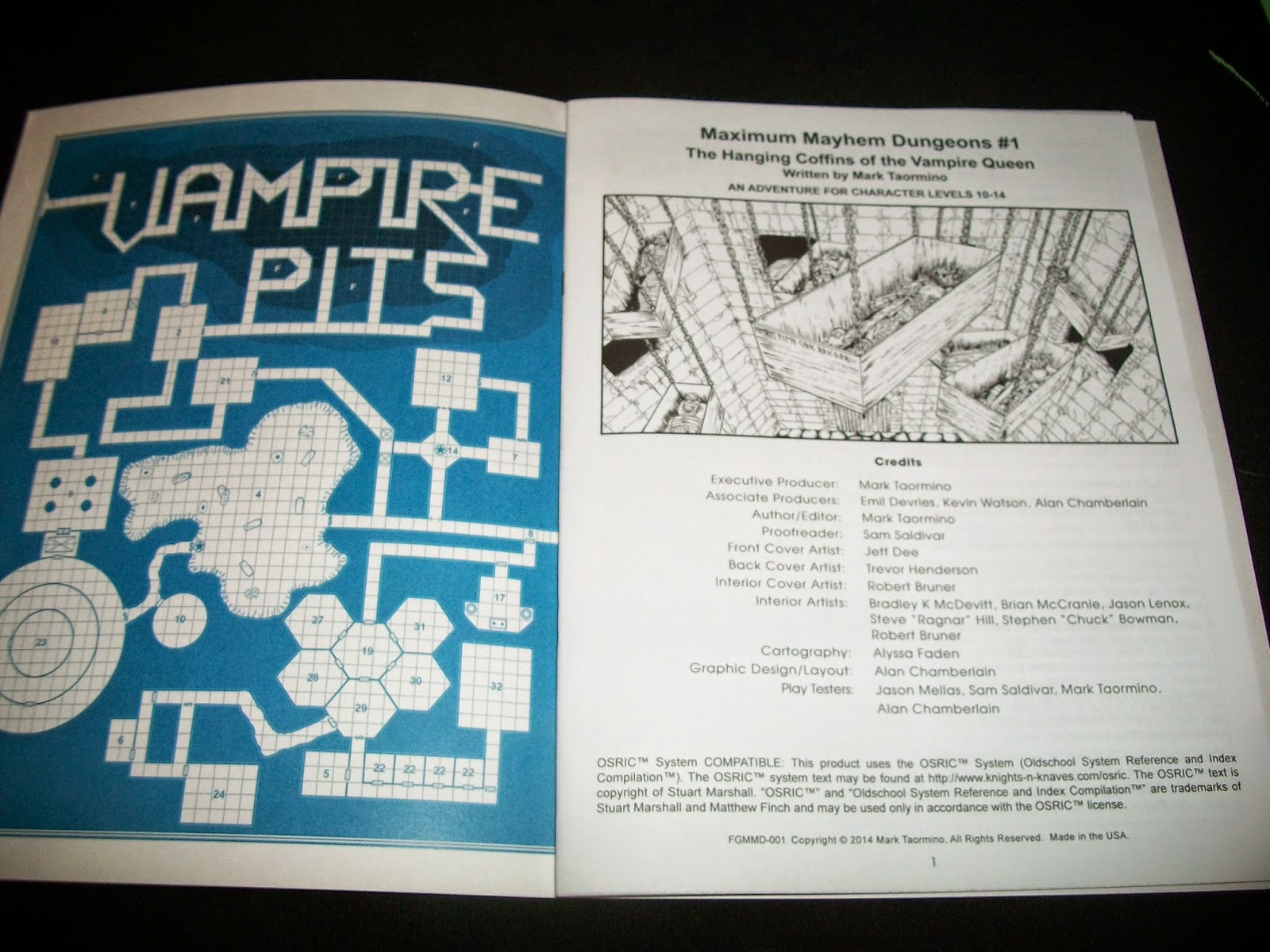 A quick word on the spacing and fonts of the  Hanging Coffins, they're very easy to read and for older eyes that's really very important. A real plus in a world of old school rpgs that like to have very tiny little lettering. He scores points for that as well. 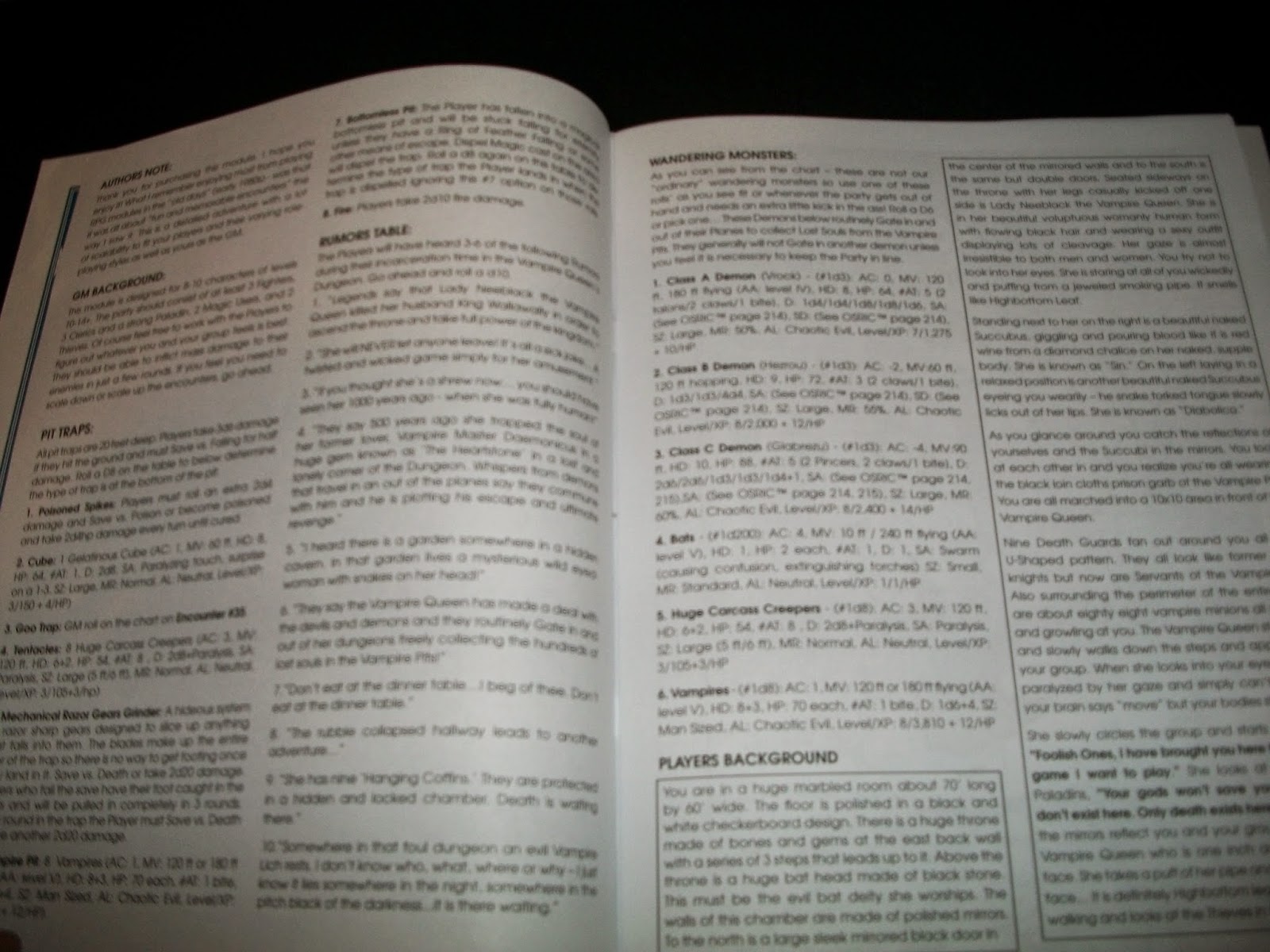 Nice old school stat blocks that are quick for a solid way to reference at the table during play is a always a plus. The encounters here remind me of Hammer's 'Famous Vampire Killers' thrown into a blender with AD&D then set on Vampire Queen! 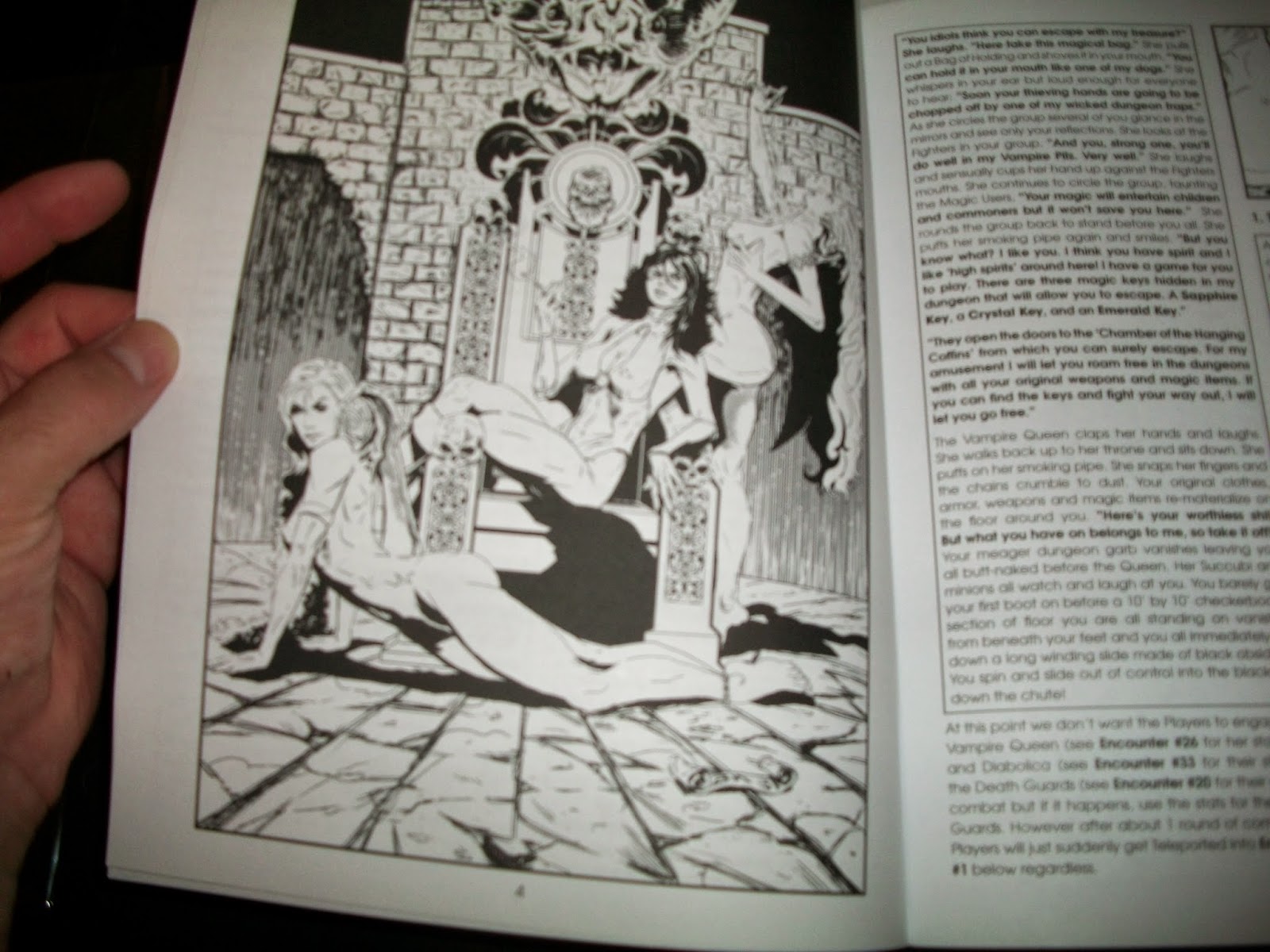 Yeah bring a few extra adventurers to this one, the humor is high but not playground at all. The module is clever but doesn't talk down to its audience.The encounters here are going to take a bit of work through but the adventure is flexible enough to allow the DM to work this adventure into his pattern of Dming and campaign. 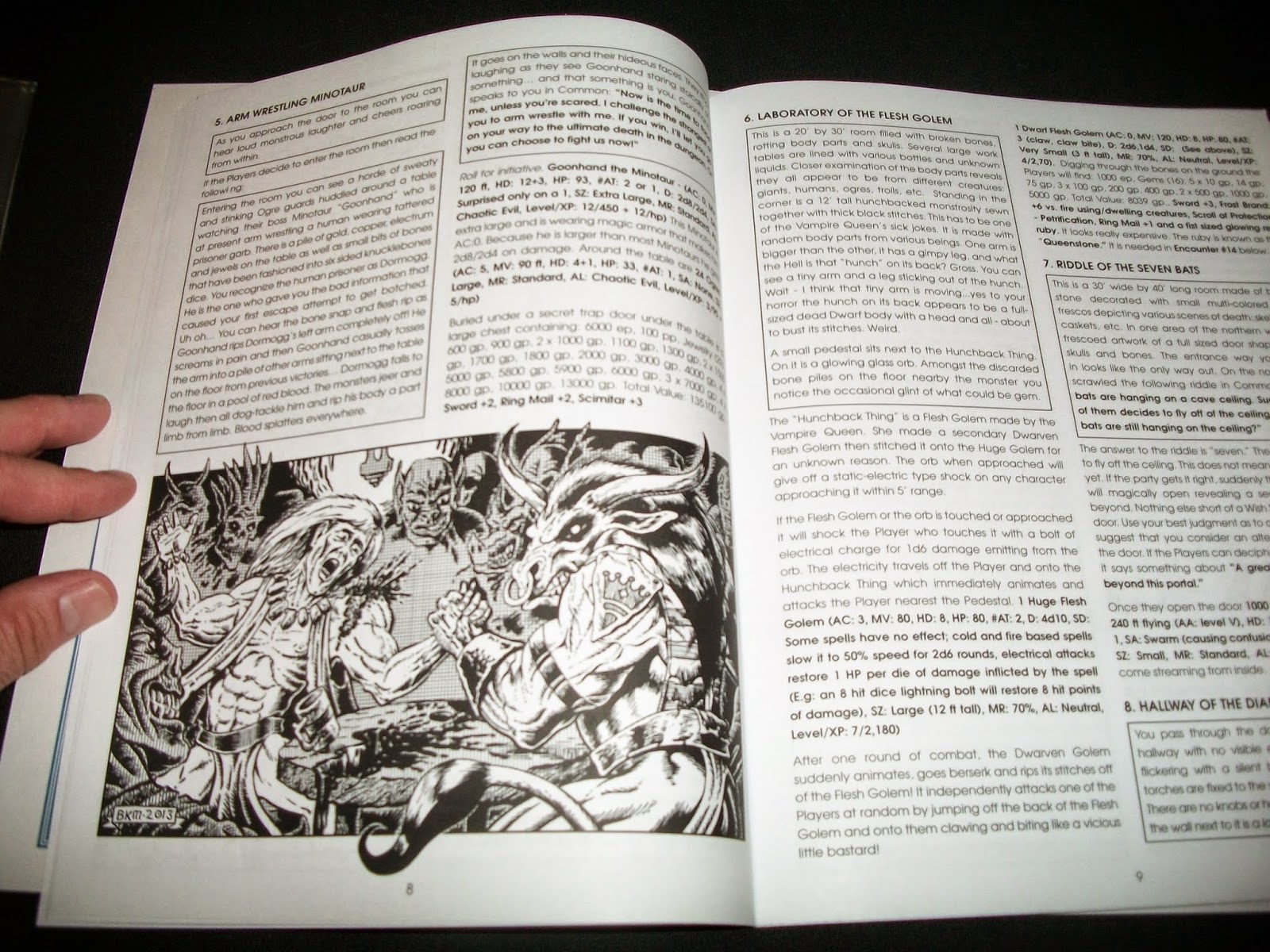 There are a few sidelines adventure bits, some really nice hooks, and a few dangling plot bits that the DM can exploit for their own campaigns but these are not barn doors that will effect play at all. Here's where the author's background as a screen play writer shows through. That's a good thing and makes this module read like a clever black horror comedy in some places and yet the adventure turns up the heat to some searing edges in other places. Its a hard and razor edge style of play to balance though but the author does it nicely. 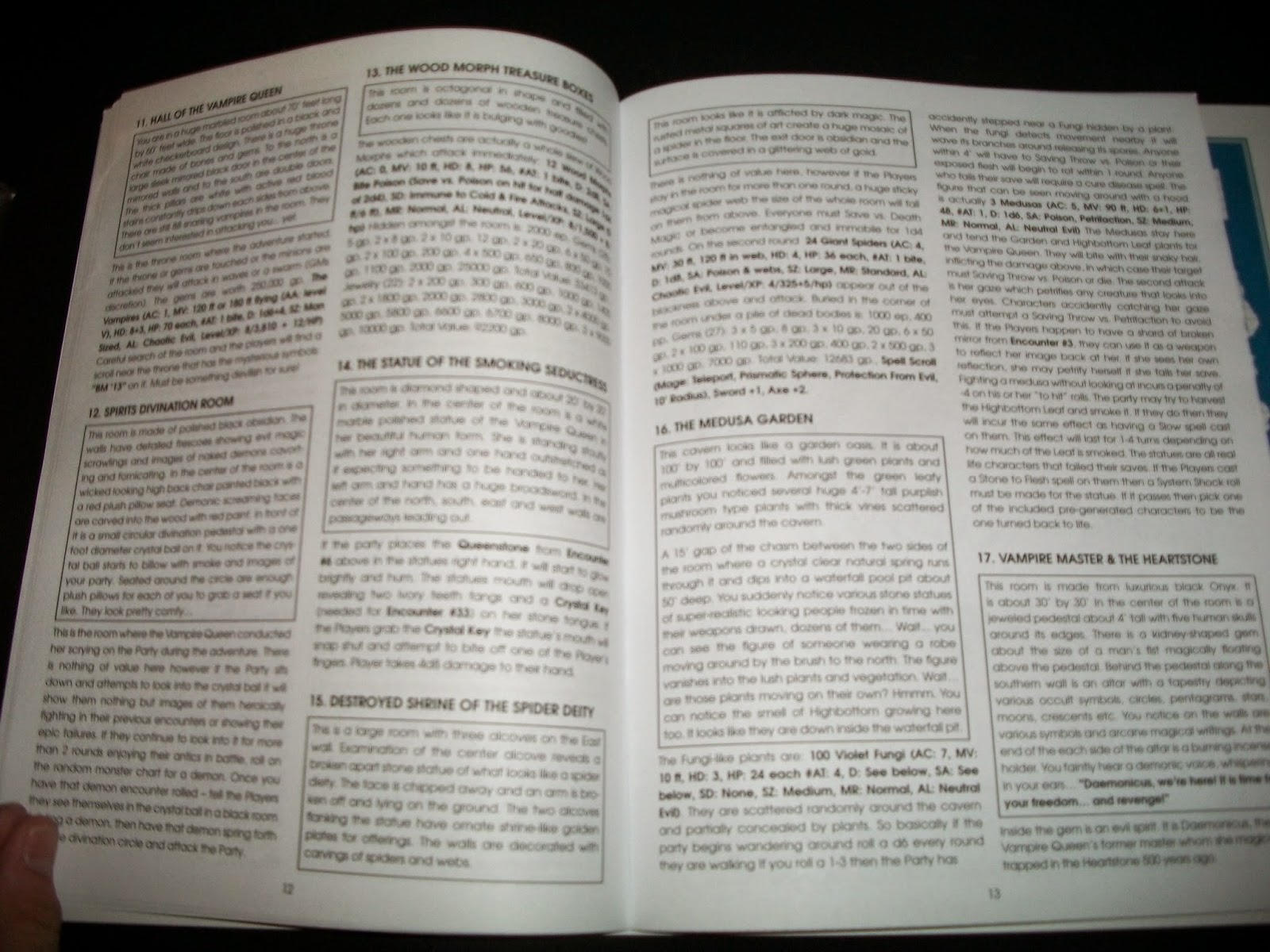 Several of the encounters are throw backs to the puzzle solving, investigation bits, and work throughs  of the older TSR Advanced D&D first edition adventures. With a bit of real skill and luck on the players part its survivable with some really good rolls of the dice. 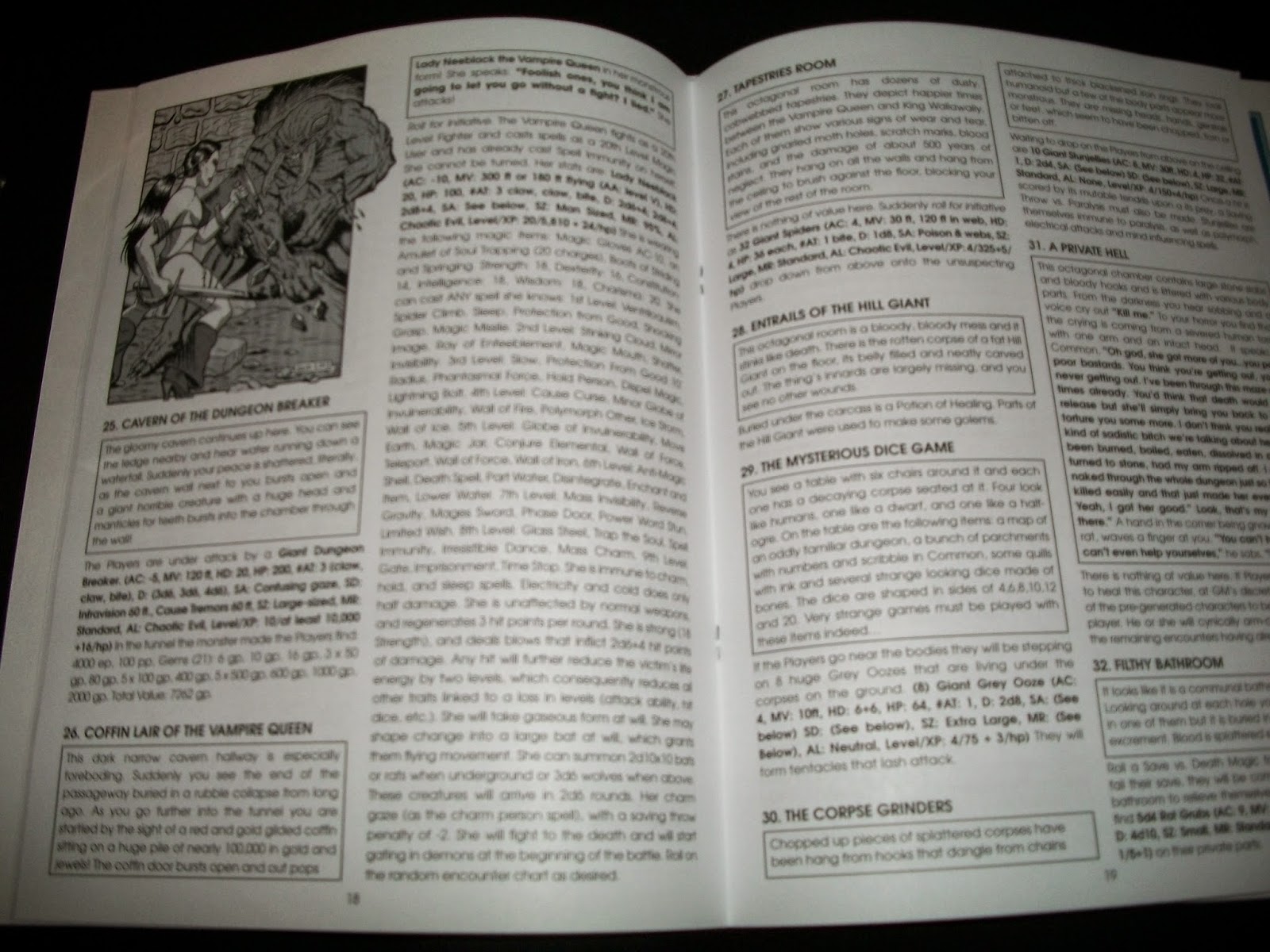 The treasures, loot, encounters, and meat of the module are a nice change of pace from some of the hum drum material that has been making its way to the marketplace lately. The Hanging Coffins Of The Vampire Queen is out just in time for Halloween and might make a fantastic October mini campaign. 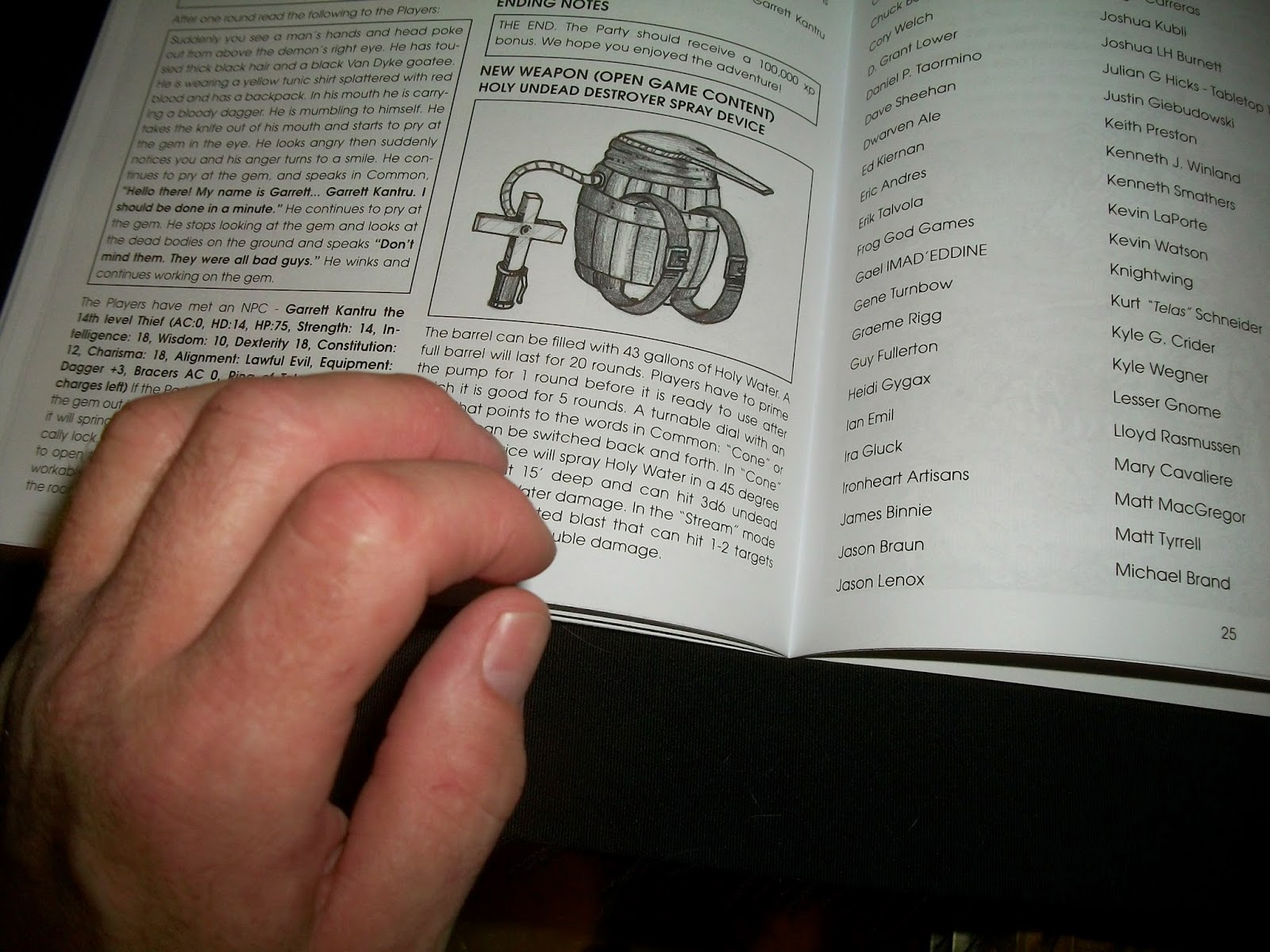 There are a lot of old school Kickstarters out there and that's fine but with Mark's efforts and further en devours only now starting to get off the ground, this was one adventure worth the wait to me. I'm very happy to have a physical copy of this adventure and it will have a proud place upon my shelf right along with my copy of OSRIC and my AD&D first edition books. 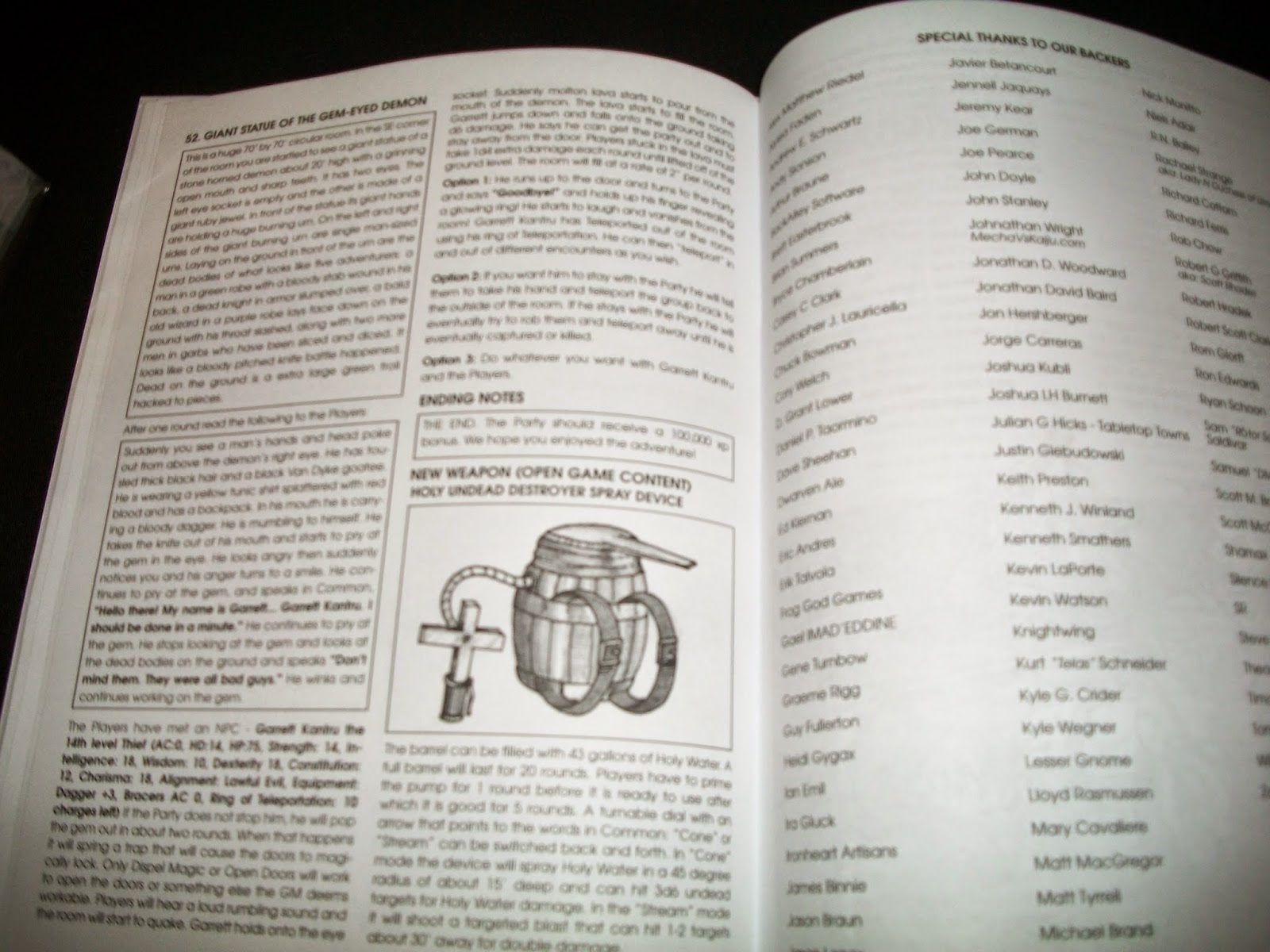 If your fretting over the level of play here in the Hanging Coffins of The Vampire Queen there are a number of pre generated PC's for play. In reading through the module, I can actually see using these as fodder for the trepidations of the Queen herself or her myriad of forces that infest her dark and nasty lair. 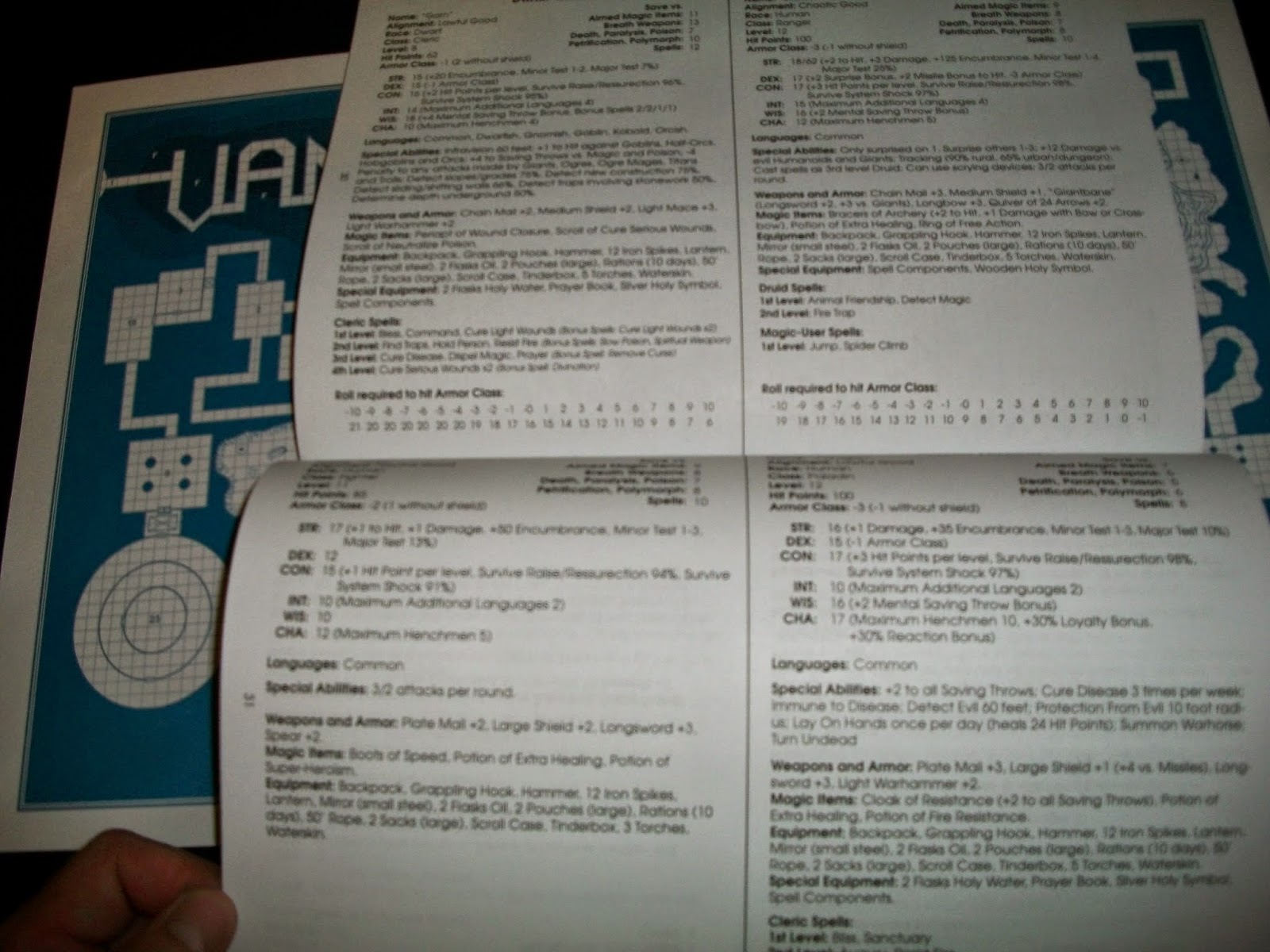 Note that the stat blocks of the Vampire Queen are easily convertible to your favorite OSR retroclone or even Pathfinder with a bit of work. The level of play here is well thought out and the balance is nice for the pregens. All in all I think that this is a really nice modern throwback to another age of gaming. 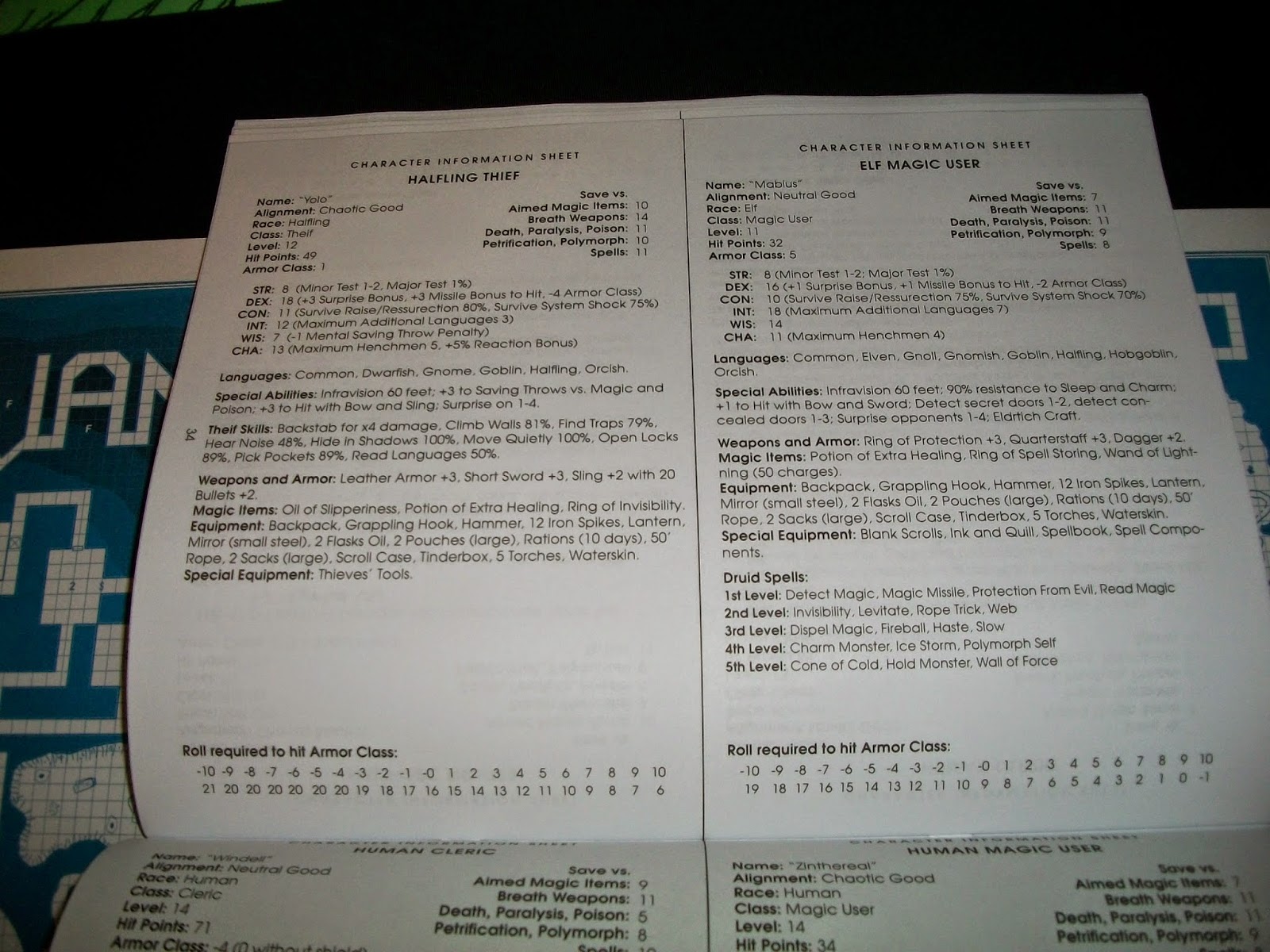 Bottom line here is that I feel that the Hanging Coffins of the Vampire Queen is worth the time, energy, and your dollars.Grab a copy just in time for October, grab some friends, and sink your fangs into this wonderful old school retroclone module today!
Note: that this one isn't for the kids, this has several adult threads that run through the module. The humor is well done and very un PC in places just the way I like it! But its definitely not for the kiddies. Now that that's understood, this is only the first of several Kickstarters that Mark Taormino will be running.
'The Secret Machines Of The Star Spawn' is his current Kickstarter and you can find Chocolate Thunder and her friends right over HERE 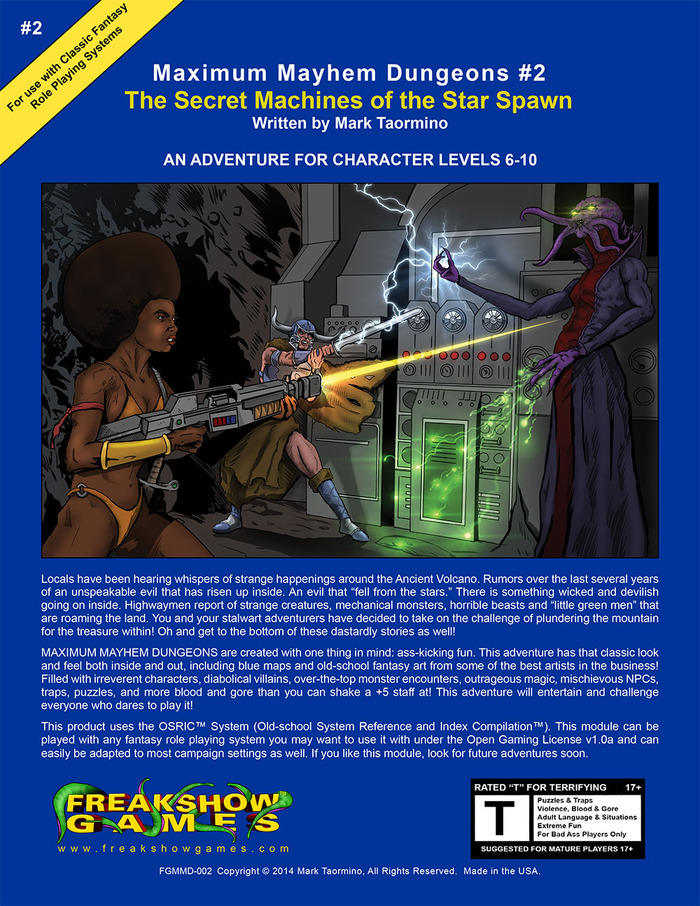