Deconstructing & Commentary The 'Better Then Any Man' Adventure By James Raggi For The Lamentations Of The Flame Princess Rpg System. War is HellThe Swedes are invading!Sorcerers have taken Karlstadt with the aid of unearthly creatures!In Würzburg, the Prince-Bishop schemes to retain control of his domain.… and yet darker forces gather…Better Than Any Man is a deluxe LotFP: Weird Fantasy Role-Playing adventure for character levels 1–4. Dungeoneering, wilderness adventuring, investigation, politics and negotiation, many new spells, magic items, and monsters—this one has it all!

Welcome to a little corner of  the Thirty Year War in the sword and sorcery back drop of  Better Then Any Man adventure for the Lamentations of The Flame Princess Rpg system. This is a deconstructionist horror adventure with witches, cults, and old school downright nastiness set into the world of a sandbox adventure with plots, counter plots, double dealing, adult situations, and the occult in full blossom around your PC's ears!
GRAB IT
HERE 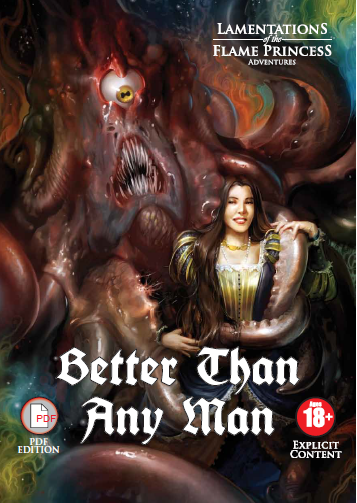 This is one of the best adventures to throw the party into the deep end of a horror themed dark survival horror straight out of the 60's or 70's with a dripping helping of dark fantasy via HP Lovecraft spun through the lens of  Dario Argento. This sandbox is set in the ruins and aftermath of  Karlstalt as the Swedish army coming through on its way for conquest against the Roman Catholic forces. Yes this adventure uses actual history as its backdrop using Catholic against Protestant forces.
From the adventure -
Better Than Any Man takes place in October 1631, in and around Karlstadt, a small town outside Würzburg. Situated in the Holy Roman Empire, both the town and the surrounding area have been in turmoil for much of the past 13 years, caught up as they have in the events of the Thirty Years War. Here are the important background details: The Thirty Years War began almost as a civil war within the Holy Roman Empire. The conflict is often simplified by describing it as a religious war between the Catholics and Protestants, but once foreign powers became involved such distinctions become wholly inaccurate as alliances became less ideologically based.
Add into this mix the Seven, gang and council of witches, wizards, and madmen whose occult power has introduced the  Dark Forces into the backdrop of the ruins of the villages and the surrounding countryside.
They've seized control of the locations involved and declared an end to war and it gets much,much, worse. PC's can wander through the landscape and deal with a variety of dark and dangerous NPC's. The machinations of the Seven are at the heart of the adventure but there is far more going on here.

What Better Then Any Man does is introduces several key concepts to the DM from the Lamentations Of the Flame Princess rpg system along with rules for black powder weapons which would be later expanded upon in the hardback rule book. The key adventure location and adventure elements are horrific, dangerous and downright PC tearing. PC's looking to tear across the landscape with guns and swords blazing are going to be dead and that's no lie. The adventure is a romp through the Thirty Year War and the horrors that echo through history brought to vivid life by the echoes and creatures of occult power throughout Better. This is a completely different take on the pseudo historical elements explored in Chandler's No Salvation For Witches adventure romp.
The darkness here is mankind and the occult forces are working side by side taking every advantage but this Better reaches into the back drop of the soul on a much more personal and intimidate level of play on the horror tradition. This is an adventure that is a piece reaching for Howard and instead finding a splatterpunk aesthetic wrapped in a brutal brick of pulp flavored witchcraft laden piece of weird adventure. In fact this is outlined right in the introduction by James Raggi with the adventure details :
• Anachronistic historical truth taken from other times and places from the Thirty Years War and the early-to-mid 17th century in general, • Historical myth, • Historical detail which is thought to be true by the author, but actually isn’t, • and pure fiction… … and it does not distinguish between them. This is a game book, not a tool for learning or teaching history, nor does it seek to encourage or discourage any real world attitudes or actions other than “Buy more Lamentations of the Flame Princess books because they’re gnarly.”
This will give you a good explanation of what's in store for the PC's and also gives a good benchmark for PC generation.
The PC's should be a very nice cross section of classes from across the Lamentations spectrum to get the best chances of not only survival but profiting from the experience laid out in the adventure.

Using The 'Better Then Any Man' Adventure
With Your Old School Adventures
Better Then Any Man takes the dark and nasty bits of a pesudo historical pulp adventure setting and mixes in the essence of an open ended seven day romp through Germany. This is done with some really nasty adventure elements lurking in the backdrop.
You've got covens,things from outside, the machinations of the Seven, time traveling wizards who murder children, and more.
This module makes Ravenloft look like The Swiss Family Robinson adventures. Seriously its twisted,evil,and darkly dangerous. Look with everything I've said before this module introduces all of the major elements of horror and depravity set against the events of the thirty year war in the Lamentations of The Flame Princess game line self contained world.
This is an offensive, dangerous, maliciously wonderful little romp through history seen through the fun house slaughter mode of James Raggi, if this sounds like a basic adventure to introduce all of the Lamentations of the Flame Princess rpg line to your players then check this one out.
A quick read through of the Thirty Year War on Wiki can't hurt when running this one.
Right over
HERE

Get this adventure if you want to get in on the ground floor of a Lamentations of the Flame Princess rpg mini campaign with all of the mature and adult supernatural horror trimmings. Not for the faint of heart but well worth the download.