GRAB IT RIGHT OVER
HERE 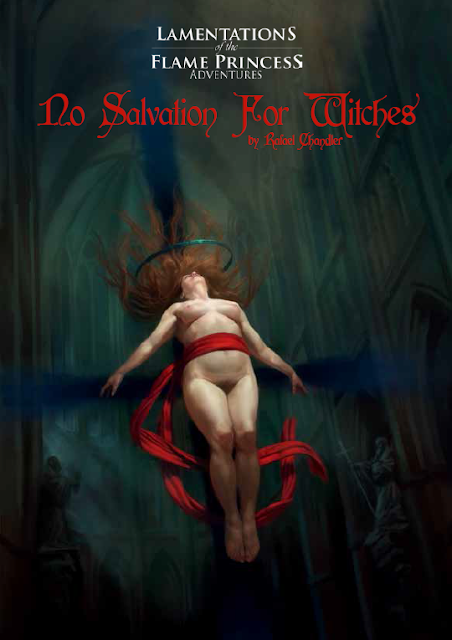 No more holding back folks, I haven't devoted nearly enough time to looking into some of the 'E ticket' rides of the OSR. In this case its The Lamentations Of The Flame Princess's Rpg System ' No Salvation For Witches' adventure.
I've been a bit conflicted about this adventure and not because of the 'Mature Content' but because of the background, and setting research I've done. I read through review after review of it and several interviews of Rafael Chandler and James Raggi's on various rpg outlet sights and various internet what not outlets for marketing the game adventure. And the successful Indie Go Go campaign that the Lamentations line has run for 'No Salvation For Witches' adventure. And no its not the MATURE CONTENT that isn't for little kids or the easily offended or the occult powers that the adventure depicts. No, I want to do the damn adventure justice,because its very,very, well done and one of the best things that Lamentations has done to date.
'No Salvation For Witches' takes place in the world and setting of Lamentations Of The Flame Princess rpg's pseudo European London of the early 1620's and the middle of the Price Revolution. You can find out more about that right HERE . The whole adventure is a giant back handed sandbox mini campaign of horror and depravity. Your going to need the  right group of players  because their going to come into a situation that reminds me of a X ticket Hammer horror fest and something akin to a punch to the gut via a splatterpunk historic adventure with lots of twists and turns.


I've seen this adventure compared with 'Better Then Any Man'; and no this isn't anything like the 'Better Then Any Man' adventure. That's one thing that folks have to understand about the Lamentations line of rpg products. They're all stand alone adventures and have to be taken on their own merits and this was done on purpose. There isn't an over arching meta plot to them except in the fact that Raggi has used his lady adventurers and signature characters as cover connectors for the various products of the line. If you the DM want to connect these products together,well really that's your business. And that brings us right back into the witch coven that centers in London and the deal of the century that they've cut with a really,really alien life form. Rafael Chandler brings his NPC's to life with a flourish and grand gesture or two that gives these poor fools depth but there is an edge of evil here to the situation because once your party is in the middle of this sandbox adventure then all bets are off.

No Salvation For Witches handles the gore and nastiness with the hand of an 80's Italian horror flick spun through the lens of Lovecraft and poured onto a steaming pile of 1600's European darkness. This is the sort of adventure  that Ravenloft kinda hinted about and never dared do. Look this is the type of adventure that would be directed by Dario Argento and starring your PC's if he was using a Robert Howard Solomon Kane story as the basis. In other words this isn't an adventure to get too attached to your PC's.They may die rather well and truly in a way that you wouldn't want them to be resurrected. Seriously because that alien god thing at the heart of this adventure is polluting everything in the backdrop of it. And its still out there and dangerous, as well as incredibly weirdly dangerous. But it also doesn't quite understand human beings and its powering the heart and soul of this adventure. That's one of the things about Lamentations of the Flame Princess adventures unique in a sense. Yes there's a greater whole to the sandbox but it doesn't touch any other adventure unless you want it too as a part of your campaign. The locations within the adventure were best summed up by the author in a recent interview in Diehard GamFAN - 'Rafael: This is an open world exploration, but there are certain constraints; the players will be able to explore the setting, which includes moors, villages, and a derelict priory. In addition, there’s a bit of a dungeon, but it’s quite small, and really, it’s very safe. Be sure to go there.'
And its all tailored around the twisted heart and soul of the No Salvation For Witches adventure setting!  But wait there's still more.

Within the adventure is a mini source book of demonology and family fun (kidding unless your family happens to be a demon lord & co.) The “The Tract of Teratology”  is worth the price of admission alone. The thing is a demon and Lovecraftian generator that gives incredibly weird and highly dangerous insane Lovecraftian horrors as prize winning monsters. Once again I reference The Diehard GameFan interview with Rafeal Chandler and James Raggi - 'DHGF: The Tract of Teratology, a key component to the adventure, is supposed to be able to generate roughly 3.6 TRILLION different monsters according to the campaign page. Can you give us any examples of the fiendish thingies that can be born from this thing?
Rafael: Of course!
“Cube-shaped body with transparent skin showing the internal organs; cold to the touch. Appendages: Glistening trench full of delicate bulbs of tissue. Scent of honeysuckle. Neutral: Acts in its own interests; bears the caster no ill will, but is not favorably disposed towards him either. If the caster makes good fodder for satisfying the entity’s Compulsion, so be it. 15 hit points. Armor class 14. 2 attacks for 1d4 damage. Movement 60′. Morale 10. Knows 1 randomly-selected 3rd level Magic-User spell. Attacks at +3. Compulsion: To consume some of the flesh of those who have fornicated recently. After 2 days, the monster vanishes silently.” "
And you get this sort of thing in spades which is perfect for adding into not only a Lamentations of The Flame Princess campaign but any old school retroclone system that needs that extra demonic kick in the teeth! You can read that interview from Diehard GameFan right HERE

The rituals and rites for summoning these horrors from beyond the pale is horrid, nasty, and downright murderous in the highest degree! This isn't stuff that you simply add to a game. Reading through this stuff  was like watching Ken Russell's Devils film from 1971. You get uncomfortable and squirm in your seat but you come away feeling that you can actually use this material. This is after all an old school horror adventure and one done in the vein of the Lamentations of the Flame Princess line and venue.
Is it worth the price of admission? Yes and then some the artwork is top notch, the text and flavor of the adventure is up to the caliber that I'd expect from the Lamentations line of product. Grab it and I so want this in print yesterday.

Using No Salvation For Witches
In Your Old School Campaign

'No Salvation For Witches' is deadly,nasty, and highly dubious for PC's and that makes it great to use. Playing this adventure is playing a low level, high horror adventure set to 'eleven' and one that hits the high points for an old school OD&D style survival horror adventure.

I would use the video game rule of three characters each a player at least. Coming into this adventure is like coming into the bad scene of a horror film. The pit here is black and the adventure is survivable but your PC is forever going to be changed by the experience. and marked forever by the experience.
Think of this as a 1620's John Carpenter 'The Thing' adventure in tone and gut churning elements brought home with the style and flourish of a basic OD&D kick to the teeth.
This adventure combines many I think of the best elements of Lamentations of the Flame Princess's rpg system and gives the DM the tools to take it to the players as an introduction into the world of sword and sorcery that this game does so well.