Adapting The Free OSR Adventure Resource The Stone Alignments of Kor Nak By E.Gygax & B.Poire To The Astonishing Swordsmen and Sorcerers of Hyperborea Rpg System

I've been following the development of this free adventure resource for months and now its come out as a fully fleshed out old school pdf.
What is The Stone Alignments of Kor Nak about?
Well according to the GP Adventures website -
Discover the secret of the Alignments of Kor Nak, defeat many foes, and piece together a secret that will perhaps bring peace to the Carnelian Queen of old. This short module is compatible with 0e, 1e, and most variants of the World’s Premier Role-Playing Game. Light on stats and mechanical details, this hex is usable in a variety of settings and games, including your own.

Grab It Right Over
HERE

So I've been wracking my brains about adapting the brand new adventure resource The Stone Alignments of Kor Nak by Ernie Gygax and B.Poire to the Astonishing Swordsmen and Sorcerers of Hyperborea rpg system. But not in the way you might be thinking, you see some very cool folks have done quite a bit of the hard work for me over at the Hyperborea forums HERE
As one of the B.Poire points out :
"You'll see that we make allusion to the "Black Gulf" as "that which extends beyond the material plane" several times in the description. That's a nod for you guys, obviously. This material is eminently adaptable to Hyperborea, by the way, but you might have guessed it, given the source. Please enjoy, and let us know what you think!"The material is hugely influencal and very well done. It presents some clever locations, monsters, adventure hooks, and more.
Hell there are even crabmen, already built into the whole thing. I love the crabmen of Hyperborea because they're a fully fleshed out alien culture with a ton of menace and horror built right into the race.
Benoist Poire points out -
I could post some notes about possible AS&SH adaptations, but I'm not even sure those are even necessary: Switch Tenkar's Landing for the east coast of Hyperborea, and the ancient Ayceni just emerged on the continent from there, cast out from Old Earth or whatever alternate setting (our own Eurth, perhaps) you'd be using in your AS&SH game. Exchange humanoids like ape-orcs for fully blooded ape men, for instance, and you're pretty much there. It's even got a bit of science-fantasy on the side with the Iron Pyramid, the Cobalt Caves and why not, the Lone Tower as well.EDIT. As far as our HSD AS&SH campaign is concerned, just include a portal from the Marmoreal Tomb into the deepest level of the Alignments of Kor Nak, back-and-forth, so the PCs can return, and you are set. Of course, any portal of such sort in Hyperborea would include some sort of chance of failure, mishap, or misdirection, but that's the gist of it right there. Boom. Enjoy the Dark Youngs of Shub-Niggurath, players. ;)
Once again this is hugely inspirational. And actually very useful advice.
I read through Handy Haversack's contribution and I see a thousand possibilities for this setting.
Yeah, I read it when I got home, and it seemed like a perfect thing to put out on the coast by Brigands Bay--or to use as the "Black Fief," Blackadder23! It's great stuff, Benoist. Thanks for sharing it. 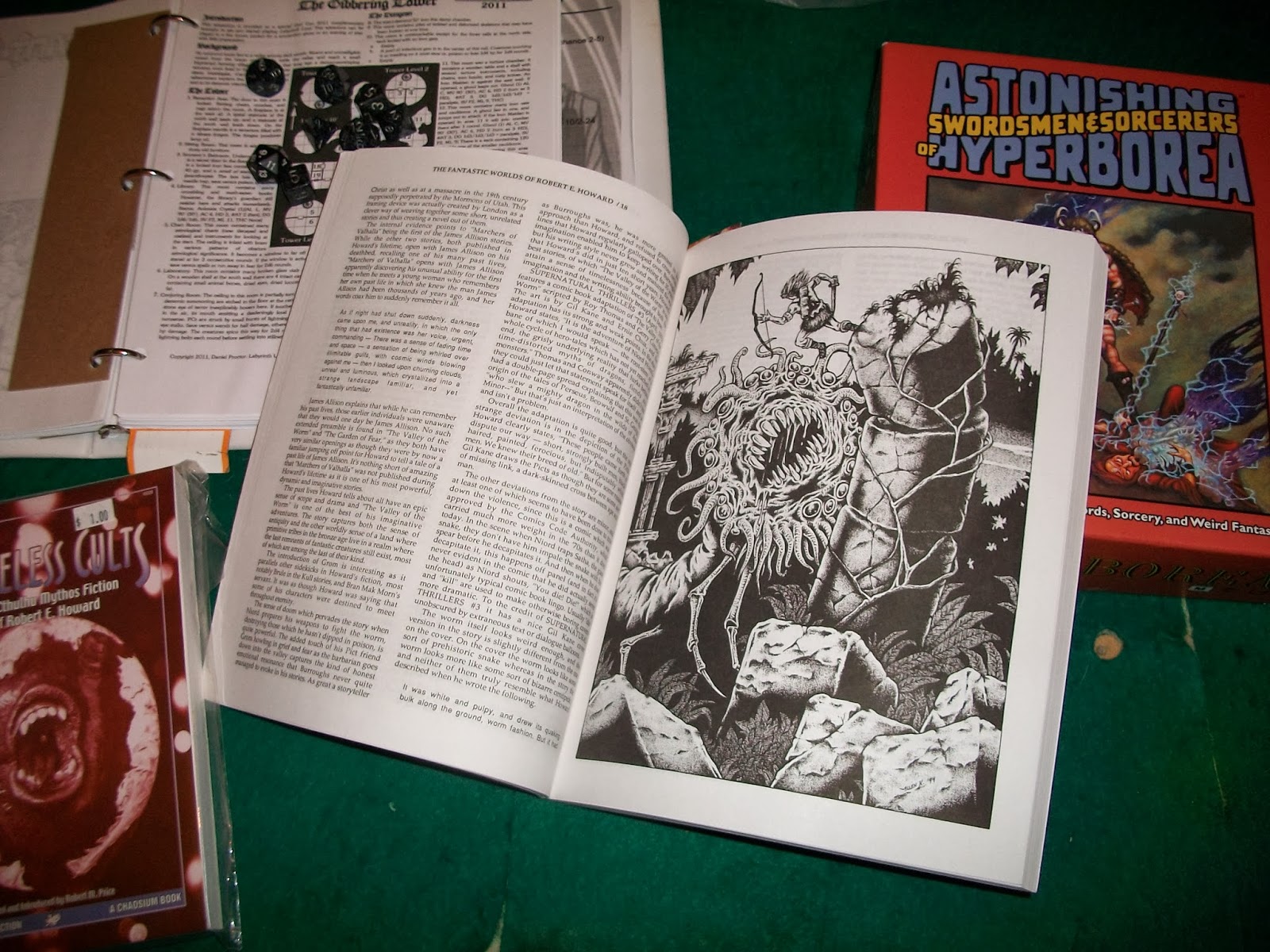 And sometimes that can be the problem with a setting,its simply too awesome to use right out of the gate.As a DM you need time to digest it and let it rattle around in your head for a day or so. The fact that its been collected and released as a pdf with a nice old school cover is simply icing on the cake.
I've already reviewed it on the Swords and Stitchery end of the blogs but after my Stars Without Number game I cracked open my Robert Howard Nameless Cult's book and my other Robert Howard fan book.
The maps in the Stone Alignment are really well done and I want to take this mini campaign hex location and build a campaign world around it.
There are a few other free resources that I want to add, mold, and mix with this one. The possibilities here are pretty damn endless. The authors have done a tremendous job with the whole package of The Stone Alignments of Kor Nak.
If you haven't gotten into this free resource? I strongly suggest that you stop what your doing and go to the GP adventures website right now and download.This is not the last that your going to be hearing about me adapting this campaign resource to AS&SH.