Once upon a time back in the 70's and 80's Carlton Comics produced some of the weird and out there titles for their audiences. They're the company who introduced me to HP Lovecraft and Clark Ashton Smith. Tom Sutton was one of their stable of artists and his work spoke volumes to me. According to Wiki :


"Thomas F. "Tom" Sutton (April 15, 1937 – May 1, 2002)[1] was an American comic bookartist who sometimes used the pseudonyms Sean Todd and Dementia. He is best known for his contributions to Marvel Comics and Warren Publishing's line of black-and-white horror-comics magazines, particularly as the first story-artist of the popular character Vampirella"

The monsters that Tom Sutton did are going be the way I'm imagining all of my Mythos monsters for the moment. Balls to the walls flat out horror

He also did quite a bit of stuff for Warren and Marvel. Locally he worked for the 'Boys From Derby'. Carlton Comics were solid back in the 70's. They had a nice range of titles and their supernatural lines were very dark (for kids comics) but it was Warren that was my 'adult' choose. However, Tom Sutton illustrated my imagination's darkest nightmares. For a DM it was pretty easy to tell a player that 'this' is the monster your PC is facing down. 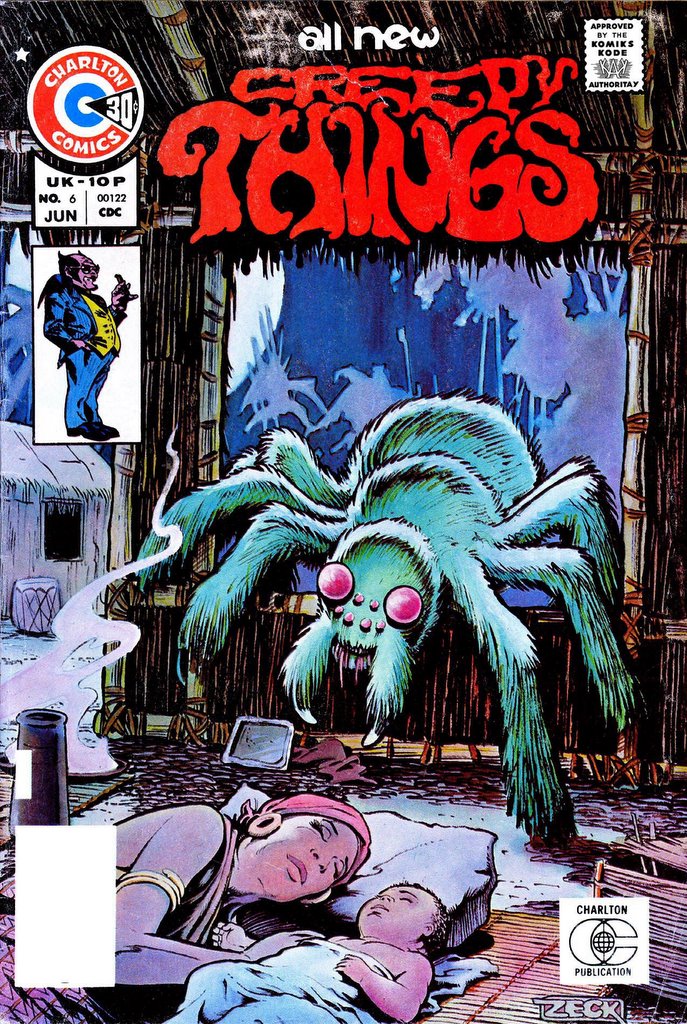 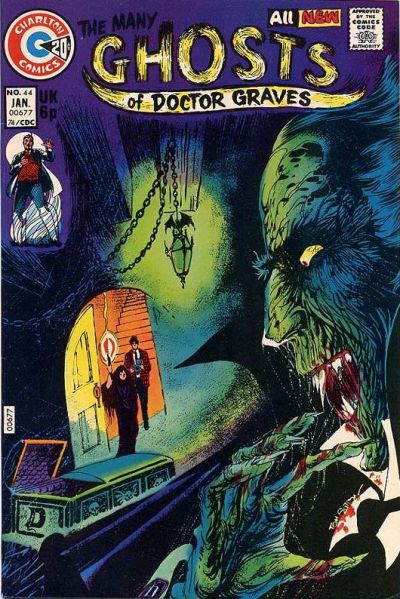 Mr. Sutton was right in the heart of the Warren revolution and at the door when Marvel had its Monsterous Seventies period. Once again Wiki:
Sutton's first two comic-book stories appeared the same month. His first sale, "The Monster from One Billion B.C.", was published in Warren Publishing's black-and-white horror-comicsmagazine Eerie #11 (Sept. 1967), though it was originally commissioned for Famous Monsters of Filmland (where it was reprinted four months later). He also illustrated the five-page anthological Western story "The Wild Ones", written by Sol Brodsky, in Marvel's Kid Colt, Outlaw #137 (Sept. 1967). It was one of many Westerns he drew for the company, including the introduction of the short-lived feature "Renegades"—The Fugitive times four, in the Old West—in Western Gunfighters #1 (Aug. 1970).
As Sutton recalled his breaking into Marvel, editor-in-chief Stan Lee

...looked at the stuff that I had brought in, [which was] stuff that I had done in the service for Stars and Stripes in Tokyo. I think he was rather impressed by the fact that I had actually done a daily comic strip for two years. He didn’t get many people who had done that. ... He just reached over and he pulled off this huge pile of blank paper. And he said, 'OK, do me a couple of Westerns and I'll see you next week. Have fun.' I remember that very well. 'Have fun.'[3] 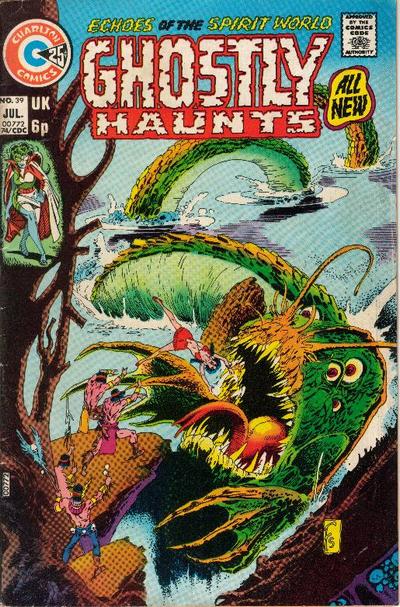 Sutton soon developed a trademark frantic, cartoony style that, when juxtaposed on dramatic narratives, gave his work a vibrant, quirky dynamism. That distinctive style helped establish the popular supernatural character Vampirella from her first story, "Vampirella of Draculona", written by Forrest J. Ackerman, with costume design by artist Trina Robbins,[9] in Vampirella #1 (Sept. 1969).[10] Later, with writer Archie Goodwin, Sutton helped transition Vampi from cheeky horror hostess to serious dramatic character in the 21-page story "Who Serves the Cause of Chaos?" in issue #8 (Nov. 1970, reprinted in color in Harris Comics' 1995 Vampirella Classicsseries).[3][10]
Though well-suited to horror stories, Sutton was also admired for his work on such science fiction series as Marvel's Planet of the Apesmagazine and First Comics' GrimJack and Squalor, and for the humor title Not Brand Ecch, on which he appeared in nearly every issue with parodies of Marvel's own characters.[10] He was not especially equipped to do superheroes, either by art style or temperament, once calling them "fascist".[11] While he lent a hand very occasionally, Sutton stayed mostly on Marvel's supernatural heroes: Werewolf by Night, Ghost Rider, Doctor Strange (in the 1970s series, plus Baron Mordo backup stories in the 1980s Doctor Strange, Sorcerer Supreme). With writer Steve Englehart, penciler Sutton introduced the new furrily transformed X-Men character the Beast, who starred in a superhero/horror feature in Amazing Adventures #11-15 (March-Sept. 1972).[3][10]
A series in the 1970s black-and-white comics magazine Planet of the Apes, a licensed spin-off of the movie series, done with writerDoug Moench, was "recognized by many as Sutton's best", said comics historian and columnist Tom Spurgeon:

Together, they created the 'Future Chronicles' stories for Marvel's Planet of the Apes magazine. [For this] enormously elaborate and cleverly designed fantasy saga set on the world featured in the movies, Sutton worked with oversized originals to better show off his mixed-media work and allow for meticulous detail. The result was a lush, moody, and striking fantasy story to stand with any in mainstream comics history. ' He really made the work a joy, and pure fun,' Moench told [The Comics] Journal. ' This guy was so into the "Future Chronicles", he wanted to put so much detail into it, he worked on these gigantic boards. It was [a] black-and-white [magazine], so it was already bigger than regular comics pages. Then he did that series twice up, these enormous things that would cover my desk. Right there it made it something special, the sheer physical size of it. The enthusiasm you could see in every brushstroke just made it so exciting'.[2] 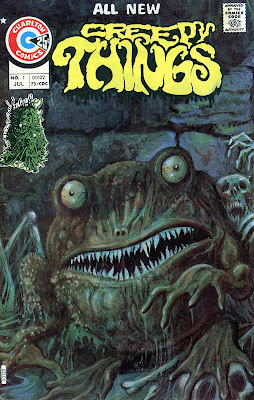 I used to walk down to the corner Dairy Mart with my weekly allowance and after dividing it in half. I'd get a couple of Carlton Comics. If I was really lucky Warren's Eerie or Creepy might be available. But it was always the Sutton covers that grabbed me.

Sutton had his own demons to deal with as well as those he drew. Again Wiki:

Original art splash page, Werewolf by Night #9 (Sept. 1973), one of two issues Sutton penciled and inked
For the horror-oriented Warren, Sutton drew dozens of stories early in his career. He moonlighted for Warren competitor Skywald Publications, drawing the Frankenstein-novel sequel "Frankenstein, Book II" (serialized in Psycho magazine #3-6, May, 1971 - May, 1972)—using the pseudonym "Sean Todd" (writer-penciler Sutton and inkers Dan Adkins, Jack Abel and Sutton himself), to avoid the wrath of publisher James Warren. A separate story inPsycho #4, written by Sutton and drawn by him and Syd Shores, was credited as "Larry Todd" (writer) and "David Cook" (art). This was the result of someone having inadvertently inserted the name of real-life writer Larry Todd rather than usual pseudonym Sean Todd.[12]
For Skywald's short-lived line of color comics, Sutton wrote and drew stories for the Westerntitle Butch Cassidy and the horror title The Heap (no relation to the 1940s-50s Hillman Periodicals character later revived by Eclipse Comics). He drew Marvel's similar muck-monster Man-Thing as eight-page installments in the omnibus series Marvel Comics Presents during the late 1980s.[10]

Living in Mystic, Connecticut, at some point,[13] Sutton in the mid-1970s to early 1980s wrote and drew horror stories for the Derby, Connecticut-based Charlton Comics, including for such titles as Ghost Manor, Midnight Tales, Monster Hunters and The Many Ghosts of Doctor Graves, also painting covers for some of these titles. In the mid-1980s, Sutton drew suspense stories for DC Comics' House of Secrets and House of Mystery which included the "I…Vampire" feature with writer J. M. DeMatteis.[14] He penciled virtually all 56 issues of DC's licensed series Star Trek (1984-1988),[10] a period in which, he said, "I know I was becoming an alcoholic."[15] The desire to continue drawing, he said, overcame the urge to drink:

[Y]ou can be drunk as a fucking skunk and there’s a little voice that goes off in your head that says, “Would you like to draw pictures, or would you like to be drunk face down in the gutter? Choose one.” Those are the only two chances you’ve got. I had my own little miracle. I thank God for it to this day. I’m not making a big thing out of it. The only reason I even talk about it is the fact that I think there are other people out there who need to know this. That you can save yourself. You go to AA, and eh. I couldn’t stick with AA. Other people, that’s a great place for them.[15] ... I ran out of bars. One by one, and there must have been a dozen in Newberryport, I was a persona non grata at ever single one of them [and] ... I would never sit home and drink. I had to have an audience.[16]

Late in life, Sutton did commercial art for New England ad agencies, and under his "Dementia" pseudonym, which he adopted in 1994, he drew for Fantagraphics' Eros Comix line of adult comics.[3] He was also a painter who had gallery showings of his bar-scene canvases.[3] A limited-edition portfolio of six H.P. Lovecraft-inspired fantasy prints, The Dream-Quest of Unknown Kadath, was produced in 1978 and reprinted in the 2002 book Graphic Classics: H. P. Lovecraft. 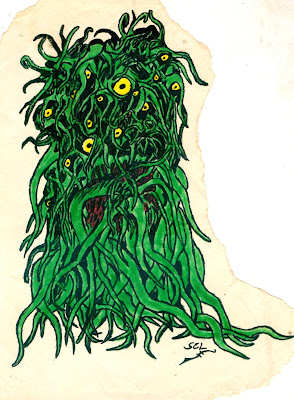 I've been pulling from my 'locally grown' artists and influences. I've grabbed many a Carlton comic plot and adapt it for OD&D, Chill, Call of Cthulhu, World of Darkness, and much more. Tom Sutton drew how I imagined the Mythos looked like along with the vampires, werewolves, and the demons of darkness that came out of Derby Connecticut

For a balls to the walls Crypts and Things campaign 'The Carlton Influence is going to be dripping from the adventures. I never got the chance to thank Tom Sutton for all the great stuff he did. There's a sea side city state named in his honor in my campaign world. 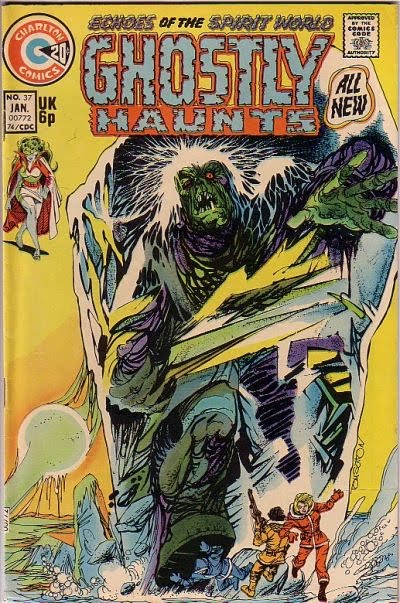 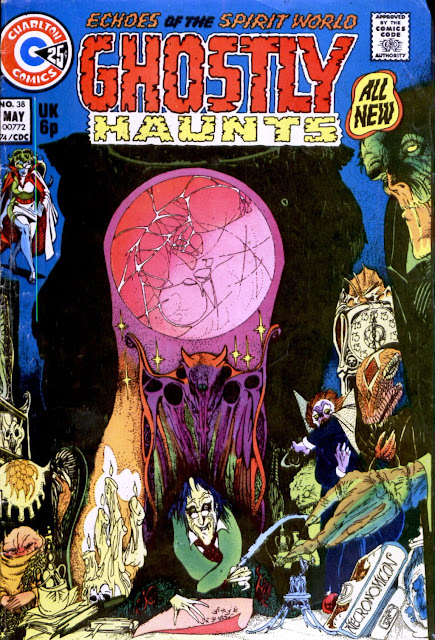